Originally posted on Feminism and Religion. 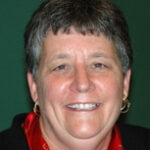 As a Catholic feminist theologian, activist, teacher, and writer Mary Hunt has made a massive impact in the field of feminism and religion.  Following the completion of her graduate education (MA, Harvard Divinity School, M.Div., Jesuit School of Theology, Ph.D., Graduate Theological Union), Mary recognized a strong need for theological, liturgical, and ethical development by and for women and responded by co-founding WATER (The Women’s Alliance for Theology, Ethics, and Water) in 1983.  Over the last 3+ decades, she has been instrumental in addressing social injustice and creating change in religion and community.

As Co-director of WATER, Mary has remapped the theological terrain through education, activism, and the building of inclusive communities.  The development of multiple projects including the Feminist Liberation Theologian’s Network, Women Crossing Worlds, and Feminist Conversations in Religion have promoted social change through feminist values and impacted the global community.

Committed to social justice, Mary has been active in movements that call for the recognition of the full humanity of every person.  As a self-identified Catholic feminist, she is dedicated to addressing issues for women in the Church and recently led a gathering of prominent Catholic theologians and ethicists to address the Vatican’s “war on women.”  She is particularly focused on LGBTQ activism and issues for Catholic lesbians, giving attention to the development of the concept “catholiclesbian.”

Mary is also a prolific writer and has authored multiple articles, chapters, and the book Fierce Tenderness: Feminist Theology of Friendship, and co-edited (with Diann Neu) New Feminist Christianity: Many Voices, Many Views.  Mary is a regular contributor to Religion Dispatches and her writing has greatly influenced feminist activism within society and religion.

Mary is a leader in the feminist theological community and her work has been nothing short of transformational.  Her scholarship and activism has made a global impact and her continued commitment to breaking down hierarchy, building inclusive communities, and honoring the full humanity of every person sets the example for the next generation.  Thank you, Mary for paving the way.