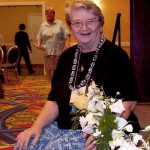 At the request of her dear friend Renate Rose, WATER honors Sr. Joan Chatfield, MM for her ecumenical work. Joan celebrated her 80th Birthday on October 7, 2012.

Sister Joan Chatfield is the Executive Director of the Institute for Religion and Social Change in Honolulu, Hawaii. Her activities span numerous interfaith and inter-religious groups. She is a member of the Assembly of the Parliament for the World’s Religions and the Executive Committee of the United States Religions for Peace.  From 1999-2003, she was one of the representatives for the Maryknoll Sisters as an NGO at the United Nations in New York.

Joan did her doctorate at the Graduate Theological Union in Berkeley where she met Mary E. Hunt and Diann L. Neu many years ago. She continues her remarkable career, including being Grand Marshall of Honolulu’s Pride Parade in 2012, spreading justice and peace as she goes.