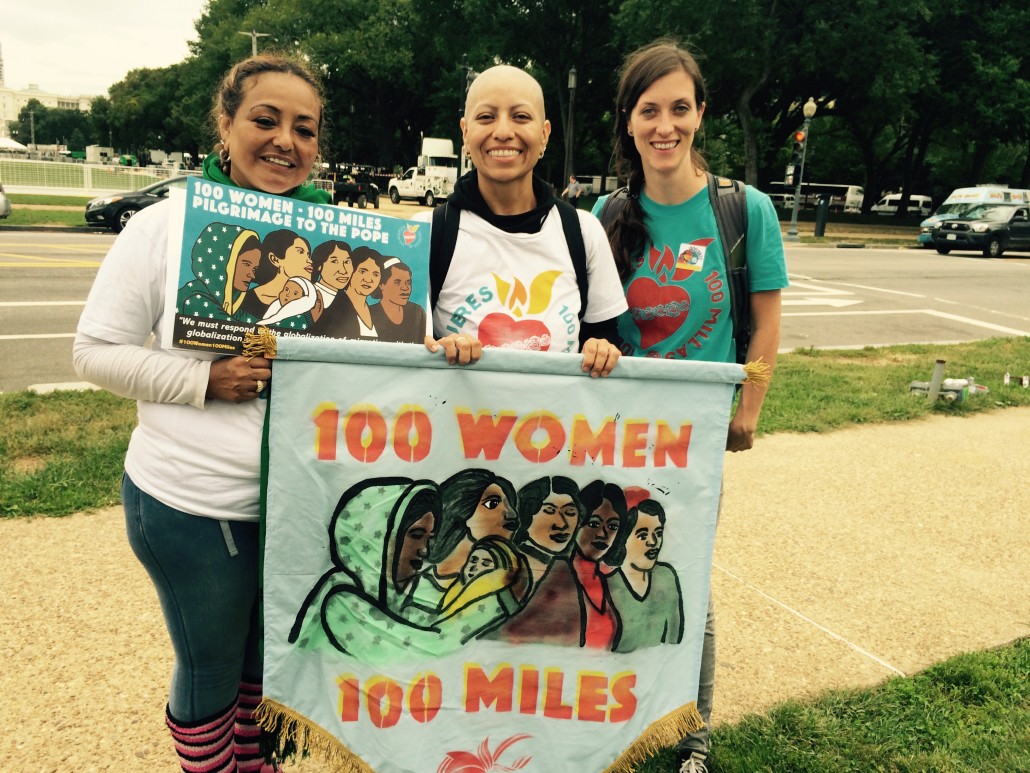 Pope Francis may have caused the influx of men in mitres during his US visit, but his presence also brought some extraordinary groups of women to the nation’s capital – women striving for justice and social change. One such group, the “100 Mujeres, 100 Millas” Pilgrimage, brought together more than one hundred women who marched as many miles in support of immigration reform and of the pope’s call to nations to care for the stranger.

Beginning at the York Detention Center in Pennsylvania, women from all across the US gathered for this 8-day trek to McPherson Square in Washington DC. They rested in churches, performed in a talent show, and blogged about their experiences. They garnered support from politicians, religious leaders, and many others who joined them for sections of their walk or who attended their vigils along the way. Finally, they inspired all at WATER. Our interns joined the women and other supporters for the final three miles of their journey, from the Basilica of the National Shrine to their closing rally at McPherson Square.

Our journey with these incredible women began on the steps of the Basilica, where they were quickly asked to leave by the Basilica staff as the wo 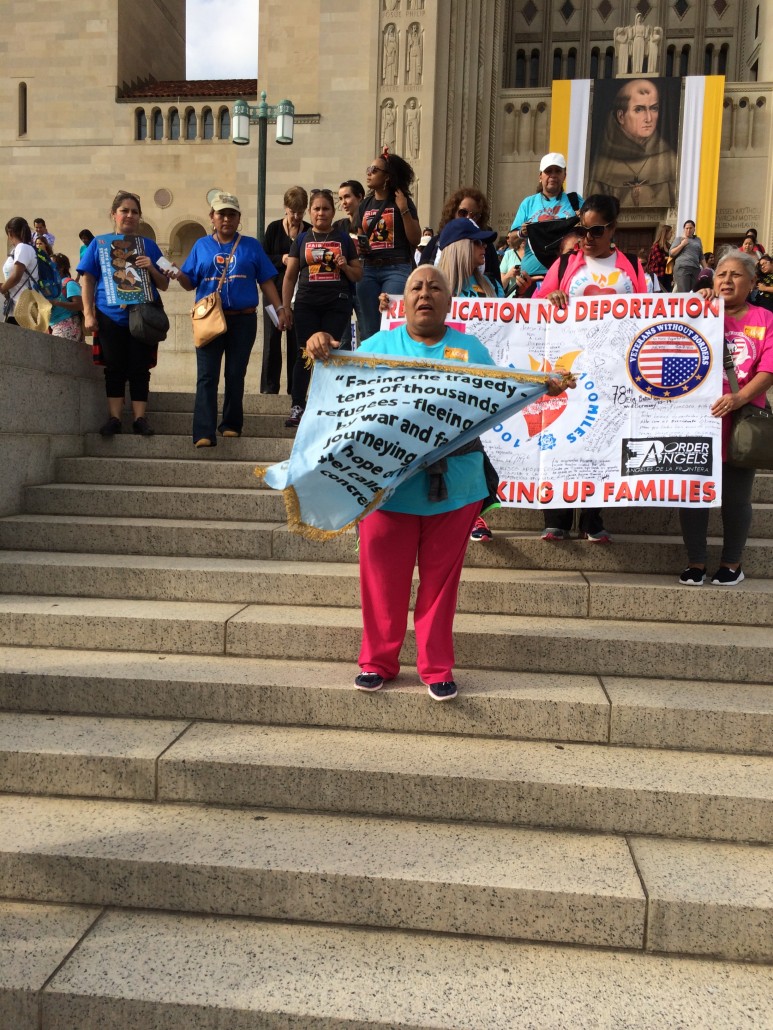 men gathered peacefully with community members to pray and begin their final three miles. Though they had walked 97 miles already to be there, they were told abruptly they did not have a permit to hold an event on the Basilica steps and had to move – a directive that may have been influenced by heightened security for the pope’s visit, the very man who these 100+ women were hoping would hear them in their fight for immigrant justice. One woman was heard to say that such treatment by the Catholic Church left a bad taste in her mouth. Though the party had to start marching from the National Shrine a little early, the walkers were energetic and talkative, chanting and waving at passersby.

We were a diverse set of women and men as we traveled down Rhode Island Ave. We spoke to a woman who had just flown from California in hopes of seeing Pope Francis, met a friend who did research on domestic violence cases, and watched a 4-year-old girl walk much of the 3 miles without asking to be carried, which is more than I can say for me and my tired feet. After a brief rest stop and rally with two blocks to go, these 100+ dedicated women entered their final stop in McPherson Square surrounded by cheers, song, and community members from all over DC. An Archbishop from Peru blessed the women and led the washing of their feet. Many other community leaders stepped up to the mic to offer a prayer, congratulations, and support. The rally lasted well past sundown and celebrated the determination of these women to make known their own plights as immigrants and the plights of many, many other.

Most of the 100+ women carried with them a story revolving around immigration. Some immigrated to the US on their own, some with children, and some to join family. Some had seen their husbands or children deported. Some are American citizens, some are undocumented, and one woman and her husband are going through deportation proceedings. Whether these women were walking for themselves or for others, all of them held near to their hearts the common cause: substantial and comprehensive immigration reform that will give dignity and community back to migrants, women, and children. We were honored to be in their presence. 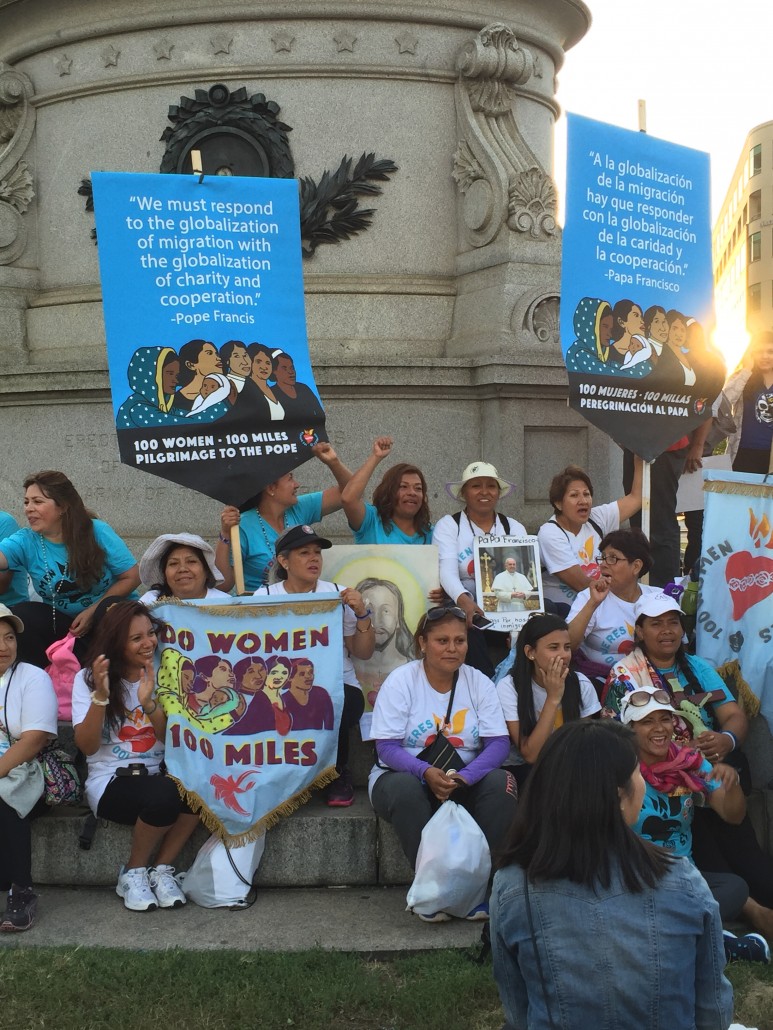