The Rev. Coralie Ling is a longtime friend and colleague of WATER. She was the first woman to be ordained in the Methodist Church in Melbourne 1969. Later the Methodists with Presbyterians and Congregationalists formed the Uniting Church in Australia 1977.

As a Visiting Scholar and Minister, Coralie graces the office annually for a week, usually en route to the American Academy of Religion Annual Meeting, to catch up on the latest feminist issues in religion. Her wisdom and laughter most recently brightened the WATER office when she visited in November of 2013 before participating in the Feminist Liberation Theologian’s Network at the AAR meeting in Baltimore. Her special interests are in inter-religious work as well as feminist studies in religion.

Upon returning to her home in Melbourne, Australia, Coralie prepared a ritual with the community of Sophia’s Spring, an eco-feminist group of the Uniting Church which includes Gwen Benjamin, another beloved WATER friend. This “Midsumma” celebration is part of a LGBTIQ festival of arts and music held every January in Melbourne. It was a colorful event that even included an amazing rainbow cake.

We are grateful for Coralie’s ministry and friendship over the years. She keeps us connected to feminists in religion in Australia. We await her return in 2014. 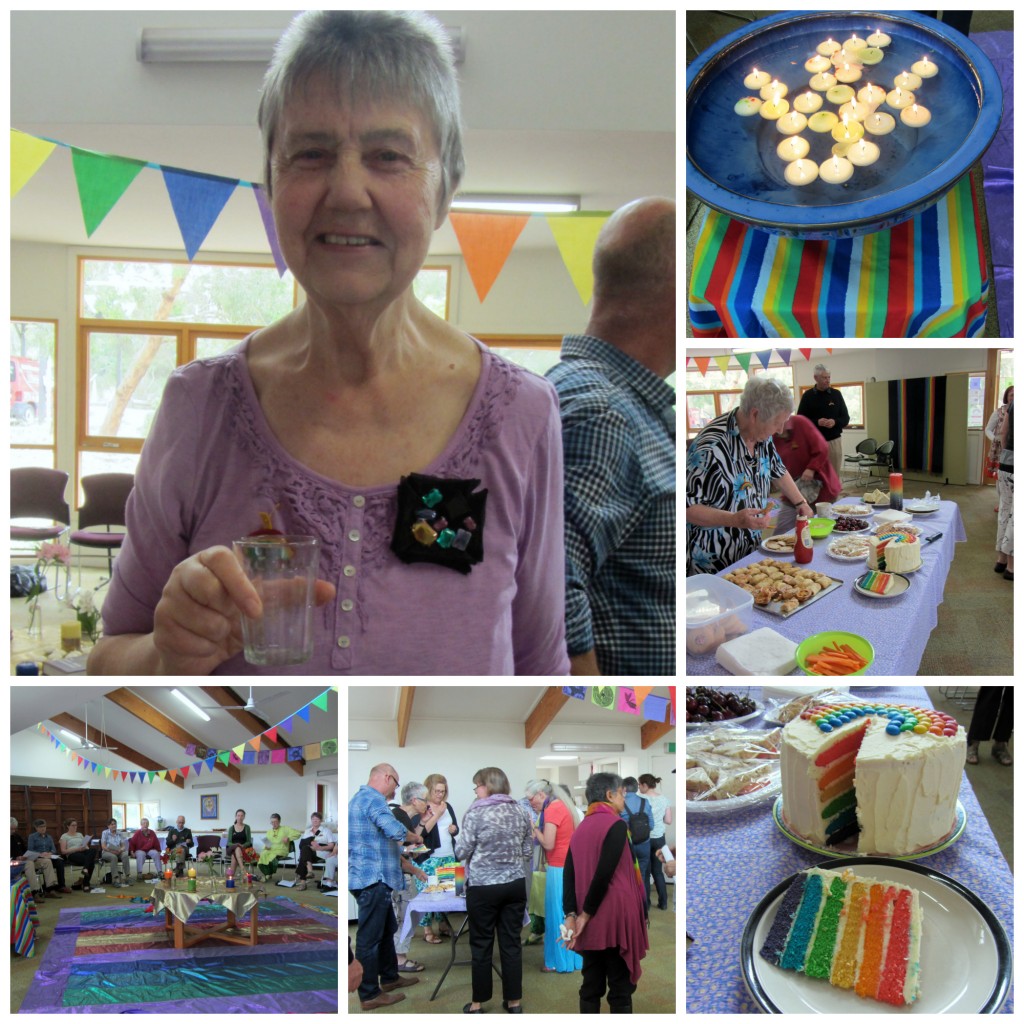 We dive in and become part of Sophia Jesus’ way, Sophia accompanying us. ( in first century writings of Philo for example, the dove of the baptism, is a symbol of Sophia Wisdom)A baptismal community according to an ancient formula found in Galatians, is where there is neither male nor female, Jew nor Greek, slave nor free that is where there are diverse sexualities, diverse cultures and races, diverse economic circumstances but each welcomed for themselves as beloved of God and bringing their particular gifts.

I’ve been asked to say something about my American experience last November. When I was in Washington DC, President Obama presented his freedom medal to 20 people, 2 people received medals on behalf of their partners who had died – Walter Neagle on behalf of Bayard Rustin, and Tam OShaugnessy on behalf of Sally Ride. Bayard Rustin, a gay Afro American had been the chief strategist of Martin Luther King’s campaigns. It was a difficult role for him as a gay man in the Afro American community. Sally Ride was an astronaut and then a leader in science education for girls. Her partner of 26 years continues this work. My friends Mary Hunt and Diann Neu had dinner the night before the presentation with Sally Ride’s mother and partner Tam, and also Gloria Steinman another recipient of the President’s medal. Mrs Ride is a great supporter of WATER (Women’s Alliance for Theology Ethics and Ritual) which Mary and Diann run. Mary told me that Sally never came out in public as a lesbian because she wanted all the focus to be on her work in science and those who knew her respected her wishes for privacy. And so Bayard Rustin and Sally Ride have been honoured after their deaths and in a very sensitive way by president Obama.

One of the sessions I took at the AAR in Baltimore was on feminist activism. There were 3 panelists and Mary Hunt as a responder, we heard about the nuns on the bus and activism of the nuns in social justice despite the Pope’s move to put the nuns under the control of a conservative bishop. We heard about some Islamic women lawyers in Washington reinterpreting Islamic law to do with guardianship of children and we heard from Dr Monique Moultri who has a project interviewing and presenting research on Lesbian Spiritual leaders. Dr Moultri , an Afro American woman has been concerned about how young women learn sexual ethics in the Afro-American community and the pressures on them. She did her Phd on sexual ethics. There is a great need for models and leadership in the area of sexual ethics and so her project is to interview Afro-American Lesbian spiritual leaders  and research the area of Lesbian sexual ethics. She makes the case that for an Afro-American woman to be both Lesbian and a spiritual leader is subversive in itself. And to understand who you are and speak about it is a form of activism. One of the 5 women she has interviewed is Darlene Garner, currently Darlene is an elder, minister and administrator in the Metropolitan Community Church, a church that specifically ministers with the GLBTI community. She is overseeing MCC churches here and in New Zealand, Europe, Canada and parts of the USA.

Darlene was a bright student, and an active girl scout and a member of the all-state youth orchestra. She married at 18 an older boy from school and in the next 3 years had 3 children. When the marriage broke down her husband accused her of being a lesbian and this was the beginning of her realisation that she was. She married again and had another child but then came out to herself and to others as a lesbian. She had a job in the girl scouts and when it was public that she was a Lesbian she was sacked. She had found a community in the MCC and began to realise she had a vocation for ministry. It was a struggle with her 4 small children but she went to theological college and trained as a minister. One of her first appointments was in Baltimore – more than 20 years ago Gwen and I met her there. We were there for the national council of churches women’s meeting but Darlene and many MCC members were there lobbying to be members of the national council. They were not successful but Darlene ran a service of support at her church. I remember her as a powerful preacher and very personable. From Baltimore Darlene moved to Northern Virginia and helped the congregation there during the AIDS crisis. She was chaplain to an AIDS hospice and president of North Virginia AIDS Ministry.

She then became part of the MCC Elders team in LA and later lived and supervised ministry in South Africa and then Mexico. She has instituted a special ministry within MCC for people of South African descent and oversees MCC ministries of inclusion and diversity around the world. During these later years she developed a relationship with Candy Holmes and they were one of the first Lesbian couples to be married in Washington DC 2010. A comment about her is “She is most content that she can finally be all of who she is, knowing that this alone gives hope to someone else.”

Dr Monique Moultri is doing her project which will become a book of interviews with Lesbian spiritual leaders so that these women can be honoured and have a higher profile in the GLBTI community and beyond for the sake of all of us and especially the young. Together we seek the kin-dom of God and right relationships. This is the vision of the kin-dom, the rainbow of beauty, diversity, and justice, Sophia wisdom’s rainbow. Dive into the baptismal waters and see the vision of Sophia’s rainbow over us all.

In Memory of Her—Peggy Cleveland