Joan Chittister: Her Journey from Certainty to Faith 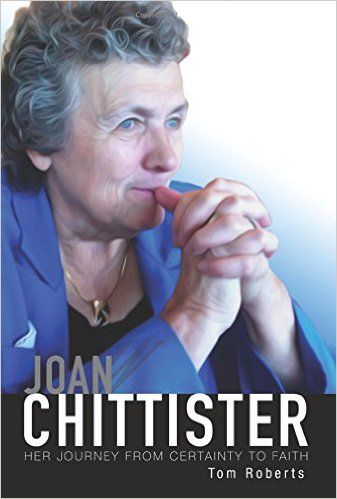 Joan Chittister is a force of nature whose embrace of monastic life has reshaped that institution. Her prodigious writing career (more than fifty books at last count), leadership in her beloved Erie Benedictine religious community, and efforts to bring about peace on the global stage are well documented. Yet Tom Roberts, longtime writer for the National Catholic Reporter, has gone deeper into Joan’s life story to illuminate some of the whys and wherefores of her choices. The result is an engaging read facilitated by Joan’s cooperation in the telling. It is a definitive biography, but it is by no means the last word on a woman who is still very much in the throes of a busy, productive, and challenging life.

The “news” of the book is Joan’s self-disclosure of a bruising childhood. Her father died when she was a toddler. Her mother remarried a man who, while allegedly well intentioned, drank to excess, abused the mother, and caused little Joan enormous anxiety. Imagine a young girl trying to separate her parents in their physical altercations. Chilling.

She and her mother eventually left Mr. Chittister (who had adopted Joan), thus beginning her mother’s life as a young, single, uneducated though very intelligent woman. Like so many women and children in the world Joan has since tried to improve, they struggled to make ends meet and to live with dignity. It was a tough start and it marked Joan in ways that are not surprising.

That she has waited until she is almost 80 to disclose this aspect of her life is simply her choice, to be respected by her readers who thought they knew all there was to know. Joan’s integrity is such that her writing is not all about her; it is about spirit. The fact that her own childhood traumas are not splayed all over her writing is, in my view, the measure of her prudence, not the proof of her inauthenticity. She knows that the personal is political and the private is private, a good feminist distinction. Would that some other writers would take the hint.

The convent beckoned Joan, a place she thought would be safe and harmonious. At first, it was, and surely by comparison to her early life, it was a marvelous change. Regular meals, set times for prayer, clearly delineated roles and hierarchy offered a certain comfort. But as religious life changed through and after the Second Vatican Council in the 1960s, Joan and her sisters were rocked. Contrary to her reputation as a maverick, there were times when she defended the status quo—the habit, for example—and came later to change than some in her group. But change they did.

Tom Roberts traces her trajectory through a bout with polio, college, then teaching, doctoral studies in communication, leadership in global Benedictine organizations, her presidency of the Leadership Conference of Women Religious, and, eventually, as the prioress of her own community. He highlights the support she has always had from close friends, especially Sisters Maureen Tobin and Mary Lou Kownacki among others, who are essential to Joan’s success. Whether by driving her around, typing her papers, editing, or giving flesh to hot ideas, Joan, like all of us, needs a village and their model of women’s community life rather than marriage or coupling is intriguing and instructive.

Joan has had her innings with Vatican officials. The story of her invitation to address the Women’s Ordination Worldwide Conference in Dublin in 2001 illustrates the lengths to which Catholic clerics will go to silence women. Christine Vladimiroff, then prioress of the Erie Benedictines, was ordered by the Congregation for Institutes of Consecrated Life and Societies of Apostolic Life to forbid Joan from speaking or attending the meeting. Joan made it clear that she was going, and Christine eventually decided that she would not interfere. Though they were not close personal friends, each had the wisdom to see the issue as bigger than they were.

The point was not the ordination of women, they argued, but the freedom of women religious to manage their own congregations without interference. Christine placed her letter of refusal to the Vatican on the altar at Erie and invited her sisters to join her in signing it. All but one member, presumably Joan, did. The Vatican never peeped back, though they dispatched some officials to investigate and found things in Erie quite in order. After all, Joan did not claim she wanted to be a priest. She is not publicly pro-choice, as far as I know, and her support on LGBTIQ issues, while early and solid, is not a signature issue.

The picture that emerges, both in the book and in Joan’s writings, is of a complicated spiritual soul who wrestles like the rest of us to make sense of life. She writes so fluidly that an undiscerning reader might think she has easy answers. But Joan and Tom Roberts make clear that her spiritual output is the fruit of enormous input, struggle, doubt, and pain, all suffused with faith. It will feel familiar to many readers.

What does one do for an encore after serving in virtually all capacities available to a woman religious, after writing dozens of books and giving hundreds of lectures? Most nuns do not retire to rest on their laurels, ever, and 80 is still, ironically, practically middle-aged in some communities. So Joan was blessed and commissioned by her crowd to go and make friends in all nations, something she continues at this writing.

An appearance on Oprah’s show, in March 2015, introduced her to a huge new public. Peace efforts through the Global Peace Initiative for Women that she helped to shape are part of her commitment. Mostly, she writes, book after book, but also letters to people who seek her wisdom and pastoral support.

The Erie Benedictines now have a great deal of outreach in their local area, feeding, educating, welcoming. They have young women, both oblates and prospective members, who find them, as Joan did, an attractive group with a serious purpose yet with a lighthearted, balanced approach. Benetvision is a going concern that publishes Joan’s and other people’s work and nurtures an on-line community. So the fecundity of Joan Chittister spreads well beyond what one person can do.

This book serves as a useful introduction to an important spiritual figure. It also works to deepen her readers’ perspectives on her life, and to whet the appetite for seeing how the octogenarian feminist religious leader and her cohort continue to shape the monastic tradition in postmodern relief.

Contrary to some of the studies and opinions expressed in the last chapter of the book (which I think Tom Roberts could have omitted), where hand wringing over the future of religious life is expressed, I am betting on the Benedictines. Joan and her friends have seen through the façade of institutional Catholicism. They have rolled up their sleeves, hauled out their iPads, and done the hard work of ministry according to their tradition. I predict that their influence will endure longer and in more varied forms than we can imagine.

In Memory of Her: Janis Roihl
Scroll to top