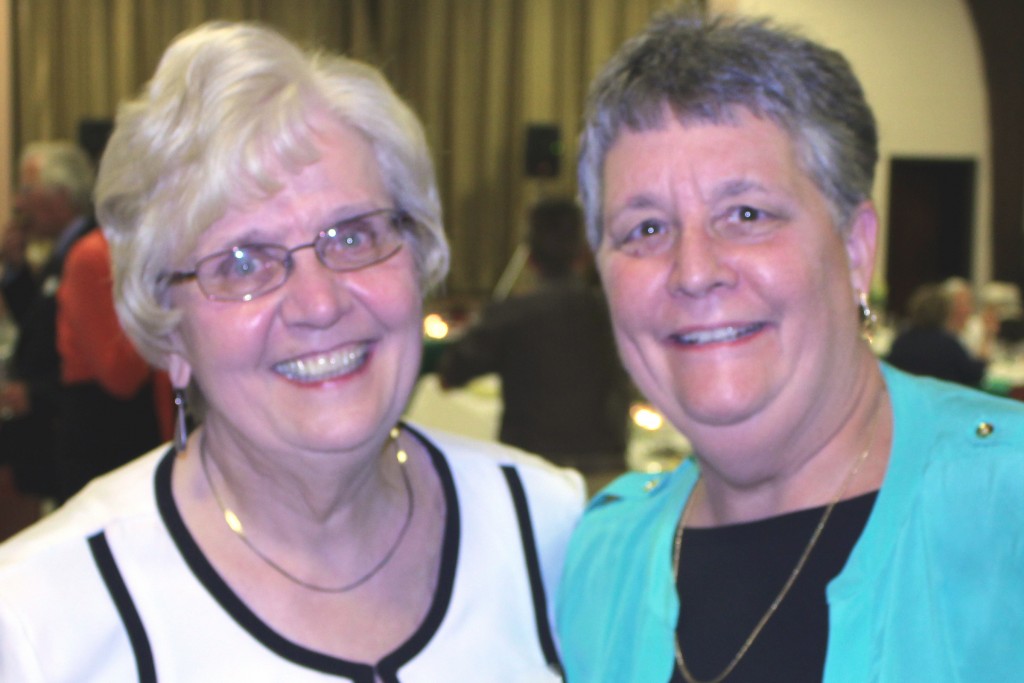 Breaking news! Call CNN! All four of the readings Maureen chose for her service are focused on women! And well they should be, as we celebrate Maureen’s fifty years of committed religious service to the world through her faithful membership in two Catholic-rooted women’s communities.

The powerful words of Ruth and Naomi that Rabbi Fred Scherlinder-Dobb read, and now “The Magnificat” that I have just shared, are classic examples of women’s religious agency, women making clear what they think and believe. I daresay Maureen carries on this tradition, weekly on the radio no less!  In the Christian tale, Mary and her cousin Elizabeth are chatting about their respective, chosen pregnancies. According to the story, Elizabeth acknowledges something about Mary’s unique motherhood. Something new and wonderful is afoot here. Then Mary launches into her faith statement that still has powerful echo today.

This passage from Luke 1 is a canticle, a song that has been set to music by Bach and Mozart among others. It is a catalogue of divine actions that Mary, the mother of Jesus, holds up as exemplary. Read in our context, on the brink of war and in the midst of unbridled plenty for some and unspeakable want for others, the words take on fresh allure. Read in tandem with Maureen’s life, the text becomes very concrete.

“Your mercy reaches from age to age”—a good motto for Congress and the military to redouble efforts for a peaceful, diplomatic solution in Syria—save everybody’s face and their bodies too.

“You have scattered the proud in their conceit”—good luck showing up for your “Interfaith Voices” radio show interview with a large ego. Maureen the moderator will make sure you are focused, respectful, and brief like everyone else.

“You have deposed the mighty from their thrones”—is that what Mr. Putin was trying to do in his New York Times op ed? Who knew!

“You have filled the hungry with good things”—Maureen’s radio show, an audio magazine, is a veritable smorgasbord of nutritious religious news, commentary, and personal stories.

The Magnificat captures not only important things about God’s actions in the world, but also important aspects of us. Maureen’s jubilee gives us a chance to pay attention to them. The poet Mary Oliver asks: “Tell me, what is it you plan to do with your one wild and precious life?” In Catholic speak, that is a question about vocation—who will you become, what will you do?

I believe that vocation, not just in terms of religious life but wholesale, is what you or I can do that literally no one else in the world can do. And if we don’t do it, the world will be diminished. Today we celebrate someone who fulfills her vocation with style. Maureen’s life is an invitation to us to fulfill our own vocations.

Maureen is a dear friend, a colleague, a sister, a neighbor, a brilliant, committed religious woman who embraces her unique and remarkable vocation, and by so doing adds new dimensions to the world. Who else brings such energy to her workplace that interns a third her age pant breathlessly behind trying to keep up the pace? Who else lavishes such attention on God’s own chosen cats? Who else speaks truth to episcopal “powers that think they are” but does it in ways so direct and compelling that bishops can only nod their heads? Who else enjoys such a sterling reputation for interfaith work that many religions want to claim her as their own? Who else serves both her Loretto community and national television audiences with equal ease and effectiveness?

We’re talking about one of a kind, Maureen Fiedler. That is what it means to fulfill one’s own vocation, not live to somebody else’s life. It is something for all of us to aspire to. Elizabeth and Mary fulfilled their vocations in their ways, and Maureen is doing it her way. The challenge is for us to do the same with out lives.

In Mercy and Loretto circles (and by now all of us are one community, I think!), fifty years of committed membership is notable, but not even close to the end. I know virtually everywhere else, 50 years—of marriage or work, for example—is considered an achievement. But these Mercy and Loretto women are of pioneer stock and they have so much fun that fifty years for them is just getting started.

How many of us can say that choices we made at age 18 or 20 are choices we continue to affirm today? A 50th anniversary is less an endurance prize and more like the biblical sense of jubilee, seven times seven, when the land rests, debts are erased, property is redistributed, the world is different. The world can and will be different because some people—like Maureen—make it happen by living fully their “one wild and precious life.” Today’s celebration invites us to all to recommit to living fully our own lives.

Thanks, Maureen, for the vivid reminder. With the biblical writer we say, “All generations will call you blessed.” Thank you. Amen. Blessed be.

In Memory of Her
Scroll to top