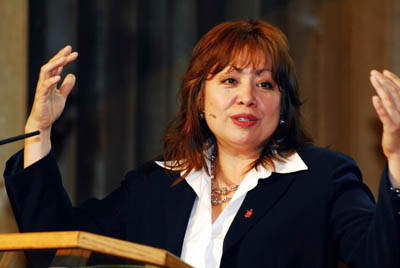 Bishop Minerva G. Carcaño of the United Methodist Church is part of a new wave of women’s leadership in mainline Christian denominations—and if our recent phone conversation is any indication, she has her work cut out for her. She must assume the bishop’s role of watcher or overseer; she must surpass her male colleagues in competence to show that a woman, in her case an Hispanic woman, can be a good bishop; and, she must find a way to live out her own unique commitments with integrity. As was said of the legendary Ginger Rogers, she must do everything her male counterparts do, but in high heels and backwards.

A Focus on the Marginalized

The daughter of Mexican farmworkers, Minerva was born in Edinburg, Texas. She grew up in the cotton and tomato fields wondering if anyone cared about her. She heard a local pastor who preached a word of justice from Isaiah say that God cared about those who toiled on the land—that same man took action, going to the school board to find out why all of the local Hispanic children were tracked in the lowest classes and how to change that. Minerva decided early on that she wanted to be like him, preaching and doing the work of justice.

After college at the University of Texas Pan American, Minerva completed a Masters of Theology degree at Perkins School of Theology of Southern Methodist University. She was ordained as a Methodist Elder in 1979 and served as pastor of various churches. In 1986, the Rev. Carcaño was the first Hispanic woman named a District Superintendent in the Methodist Church. She served in West Texas, New Mexico, and Portland, Oregon, where her ministry always focused on the marginalized.

In 1992, she organized the Southern Albuquerque Cooperative Ministry, an ecumenical venture with emphasis on services for immigrant families. Such efforts were rare at that time, but the success of her leadership remains visible in a vibrant organization today.

In 2004, Minerva was elected and consecrated a Methodist bishop, once again the first Hispanic woman in the role and one of then only a handful of women across the country. She is now the very busy Bishop of the Desert Southwest Conference, which encompasses huge swaths of that region including southern Nevada, some California communities along the Colorado River, and Arizona. Relations with Mexico and immigration are major parts of her pastoral concern.

A Rock Star on Immigration

The Methodists have named her their official spokesperson for the Council of Bishops on immigration. As these issues take on national prominence, so does she as an outspoken advocate for the needs and rights of people on the border and in the fields. My colleagues in the field of church-related social justice call her a rock star, an ally who brings the weight of her office to their lobbying efforts against some of the most conservative public officials.

Minerva’s episcopal position lends credibility to her progressive insistence that each child be cared for regardless of legal status. Whether preaching in one of her churches or discussing specific cases with Lou Dobbs, she insists that immigration is not about “partisan politics” but of “lifting up a matter of conscience for this country, a moral and ethical issue. It is from that perspective that the United Methodist Church speaks.”

Bishop Carcaño seeks to develop a consistent ethic of justice. On matters of same-sex love, this is not as easy as it sounds. The United Methodist Church in its Book of Discipline holds that “no self-avowed, practicing homosexual shall be ordained or appointed in the United Methodist Church.” The Reconciling Ministries Network and many individual Methodists oppose this policy. To date, there has been no church-wide General Conference agreement on changing the policy. But in 2008, the Methodists entered into full communion with the Evangelical Lutheran Church in America, a denomination that later allowed same-sex loving persons in ministry.

Minerva grew up with a gay cousin who the family ostracized. She loved him. She searched the scriptures of her tradition to make sense of the situation. She concluded that just as farmworkers deserved justice, so did her cousin and, by extension, all LGBTIQ people. While the United Methodist Church is still debating this issue, Bishop Carcaño is clear about the connections. Sometimes trying to make them as a sitting bishop is fraught and vexed.

I asked her how she puts the two issues together. She put the onus squarely on those with power: “We cannot be free of responsibility for putting them down.” “Both communities,” she continued, “struggle economically. The law does not protect them. They need justice.”

And religions play a key role in securing that justice. As a bishop, Minerva Carcaño is between a rock and a hard place—having to uphold the church’s policy because she is an official of the church and, at the same time, honoring what she believes: “I pray that one day our exclusion of persons of homosexual orientation will end in the United Methodist Church.”

Modern Ministry is Not Simple

I broached the growing marriage equality movement asking how the Methodist and other churches might respond. She began by saying that the churches have erred by being hierarchical with the few speaking for the many. How delighted I was to hear that critique from a bishop! She explained that every change happens at the local level; people need to figure out tough issues in their own context.

Instead, mainline churches with global connections sometimes look far afield. Some, like the Methodists and the Episcopalians, default to the constricting policies of their partners in the south, for example in Africa. She observed that when denominations yield to those interests on same-sex marriage, they leave local people in places like New York or Iowa, where same-sex marriage is legal, without pastoral resources. Ministry is not simple these days.

It was refreshing to hear a bishop with a clear analysis of how social and religious change happens. In practice however, it is hard to be a bishop in a denomination that discriminates and also do justice in the way one believes. I asked Minerva about ordinations taking place in her diocese by the “Church Within a Church” movement. (CWAC is an activist group related to the Methodist community that ordains people who are excluded from ordination because of their sexuality.) She allowed as to how she has to be true to the vows she took as a bishop, but emphasized that her region is very much a part of the Reconciling Ministries Network that tries to create space for everyone.

The first CWAC ordination in Baltimore in 2008 was held in the Mt. Vernon Place United Methodist Church. At least one retired bishop was part of that ceremony. Bishop Carcaño did not feel she could participate in the CWAC ordinations in her region. She was involved in discussion about whether a local church could be used for the service and whether local clergy ought to participate. There are differing perceptions about whether she instructed local pastors not to allow the ordination service to be held in local churches. It is hard to know all that went on behind the scenes. In any case, she encouraged her colleagues to “be extravagant in hospitality” to those who would be involved even if the denomination’s real estate was not at their disposal.

Sometimes it is easier to do justice abroad than at home, where expectations are high and conservative backlash looms. This is a common problem for progressive church officials who might find it easier, for example, to stand publicly for gay civil rights than to bring about similar justice within their own denominations. In this case, there is every indication that Bishop Carcaño remains a committed ally of LGBTIQ people both Methodist and otherwise. She will have many more opportunities to demonstrate her support.

Managing Finances, Not the Needy

The economic recession is another factor in contemporary church life. Bishop Carcaño worries that churches will pull back on their mission to preach and work toward economic justice. They are more worried, she observed, about managing finances than caring for the ill or the hungry. Not on her watch! “Trust God, not to turn inward but to be generous and share,” was her prescription for the current situation.

Of course this Methodist bishop does not go it alone. She partners with the Roman Catholic Bishop of Tucson, Gerald F. Kicanas, on immigration. She joined local religious leaders in organizing an interfaith prayer service after Congresswoman Gabrielle Giffords was shot near Tucson. She was honored in 2011 by the progressive Catholic Loretto Community with their Mary Rhodes Award, given to “women notable for their accomplishments in working for peace and acting for justice, especially for women.” Her colleagues in the national peace and justice efforts, including the Human Rights Campaign, count on Bishop Carcaño’s ongoing witness as a religious leader.

I asked her what sustains her in her work—on immigration alone she must be ready to tear her hair! She replied, “What keeps me going is that every once in a while someone gets it and becomes a great leader.” I am sure many people have said that of her. Bishop Carcaño said LGBTIQ people who struggle for rights despite decades of ostracism also sustain her, along with “people who have not been corrupted by the institutional churches.” I am sure she has seen a lot who have been, especially in leadership circles.

I asked Minerva if she had a word for political leaders. The Bishop urged them to “step out in the confidence that what is just and merciful will transform the situation.” She was realistic enough to say that such an approach might not get the votes. Nevertheless, she insisted that we need to do what is “genuinely, truthfully just.” That is good pastoral counsel, maybe even good political strategy in the final analysis. But it is as hard as it is important to get politicians to hear her voice in the cacophony of competing views.

Throughout our conversation—as she does throughout her ministry—Minerva Carcaño spoke as the daughter of immigrants. She told me about a couple she had met recently who came across the border with their two-year-old child. They endured four hot days and four cold nights before being detained and sent back home. They will try again. To her, they are people of faith with a child. Our job, she proclaimed, is to “do all we can to care for this child who came to us from God.”

Progressive bishops in denominations that have strong conservative wings have a nearly impossible job. They contend with constant backlash as they pastor on a daily basis. That is challenging enough. But when they lead on specific issues like immigration and LGBTIQ rights, they can plan on many of their congregants opposing them. The expectations placed on such bishops are monumental, the achievements nothing short of miraculous. By all accounts, Bishop Minerva Carcaño gives the job her all.