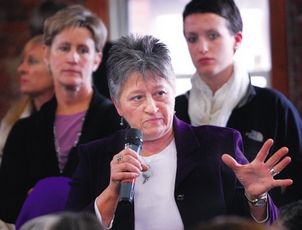 WATER invites you for a discussion on
“Sisterly TRANCE-Formation:
Opening Our Eyes and Hearts
to Honor Self-Evolution”
Led by Marsie Silvestro
Sunday, July 13, 2014at 11:30AM EDT
REGISTER HERE!

Marsie Silvestro is an internationally known composer, artist, poet, speaker, activist, and author. Her music, art, and writings reflect her many years of working with women in the areas of personal trance-formation, empowerment, politics, and feminist spirituality. Recognized locally and nationally for her political and justice work, Marsie continues to change lives as the Executive Director of Esperanza Shelter for Battered Families, a domestic violence agency in Santa Fe, NM.

Her first poetry book, “Feast of Sisterly Trance Formation,” wakes us from the trance of patriarchy and the de-magnification of women’s souls. Her second book, “Grief Walks Through Me Like A Rake,” was written after the loss of her mother and partner of 18 years, within 8 months of each other. She has written theme songs for both the Women-Church Convergence and the Women’s Ordination Conference. Marsie has four popular CD’s: “Circling Free,” “Crossing the Lines,” “On the Other Side,” and “In Avalon.”She holds a BA in Fine Arts & Theology, and an M.Ed in Pastoral Ministry. Marsie has received numerous awards as well as congressional recognition for her work in domestic violence.

While other WATER conversations are open to a wider audience, this one is intended for women who are interested in same-sex love from a Catholic lesbian/queer perspective. Please spread the word. REGISTER HERE!