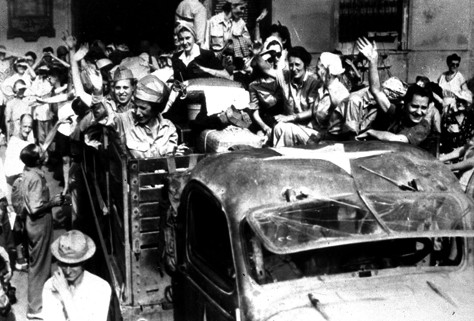 I was saving my enthusiasm for welcoming women into combat roles for the day when Roman Catholic women are ordained validly and licitly as priests. I am equally ambivalent about both.

Celebration of another barrier overcome is tempered by the fact that I oppose combat as much as I oppose sexism. Likewise, I reject a hierarchical, clerical priestly model of the Church as much as I reject exclusion of women from its leadership caste.

In both cases, the change on paper reflects what has long been the case. Men on the front lines do not fight modern warfare as women wait to feed and nurse them when necessary. Today’s military is an integrated force with units doing what needs to be done without looking under their fatigues for signs of gender.

The rules against women in combat served mostly to keep women from advancing up through the ranks; because they did not serve an official combat tour of duty, women were ineligible for certain promotions. Legal action forced the policy shift. Old canards about women being weaker go out the window when some best their brothers in training and at the service academies. Besides, the emphasis on teamwork means that brute strength and a sharp brain will get the job done.

From what I hear, not much will change on the ground because women are already doing combat jobs. The potential of 200,000 combat-related jobs opening to women only reveals how much discrimination there has been until now. More than 20,000 women have served in Afghanistan and Iraq; many of them have been injured, and more than a hundred killed. What constitutes combat is not altogether clear so it is harder to draw lines. The use of drones complicates things even further. Does someone who “pilots” one from afar and goes home to her/his family at night qualify as combat-seasoned?

Gender has increasingly less to do with anything as long as the soldier is physically, and more importantly perhaps, psychologically and morally prepared to injure and kill other people. Yes, there are women who will come back with the same kind of “moral injury” in need of attention that theologians Rita Nakashima Brock and Gabriella Lettini describe in their new book, Soul Repair: Recovering from Moral Injury after War. I regret that at the same time I understand its logic.

The evolution of Roman Catholic priesthood runs along similar lines. Arguments in favor of women’s ordination began a century ago with St. Joan’s International Alliance. Despite ominous bleats from the shepherds in Latin-titled documents, the theological consensus is focused, like that of the State Department, on why women shouldn’t serve as priests. In the absence of anything more than gender discrimination, the path toward women priests became inevitable.

When the Women’s Ordination Conference took up the project in the 1970s, calling for a “renewed Church” and a “renewed priestly ministry,” what they meant was a significant overhaul of the clerical, celibate, hierarchical model of priesthood toward a lay-led Church. It was a bit like asking the military to become the Peace Corps. We knew (full disclosure: I have been involved in this struggle for decades) that if we simply tinkered with the system we would eventually get what we asked for, yet no one wanted more such priests, female or male. Once the priest pedophilia and episcopal cover-ups became clear, the hierarchical model was thoroughly discredited.

There were 45,000 male priests in 2002. By 2020, there will be about 30,000, only half of whom will be under 70 years of age. In 2002, 15% of Catholic parishes were without a priest; by 2020 that percentage will increase to 25%. Women and some married men who are ordained as deacons are already deployed as pastoral associates, running parishes, and fulfilling virtually all of the tasks of clerics minus the public celebration of Eucharist and hearing confessions. What they do behind the scenes when pastoral needs arise is another matter. Like women in combat, non-ordained people do what needs to be done pastorally and argue the details later. This is how social change happens. Laws are made and changed in response to already existing situations, not to fantasies.

There are plenty of differences between these two cases. Those who promote women in combat probably do not want to change the fundamental nature of the military. Women priests already exist through ordination processes that parallel the official one, and plenty of Catholic women minister in their own ways. But what feels so dismayingly familiar is that we who struggle for justice only live to see such a fraction of what we envision.

I am not persuaded by incrementalist arguments. I do not think that women entering combat will change the bellicose ways of the US military. If anything, I think it will reinforce the importance of the warrior, reinscribe the role of the hero who risks death and kills the enemy. That seems to me an awfully high price for equality. For priests, the entrance of women into the Roman Catholic clerical caste will reinforce the status and role of clergy and reinscribe the power of difference (they are not lay people anymore). What a steep tab for proving the simple point of gender equality.

When the celebrations wind down I will be looking for people who want to ask hard questions about how we humans deal with our differences without war. Before the Catholic hierarchy makes its announcement, I want to talk about how we Catholics organize ourselves for worship and service. Meanwhile, I content myself with the age-old advice, be careful what you pray for.

January 2013 Ritual: A Cup of Blessing for the New Year