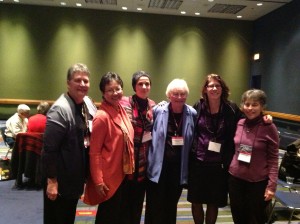 The Feminist Liberation Theologians’ Network met in conjunction with the Annual Meetings of the American Academy of Religion and the Society of Biblical Literature on November 16, 2012 in Chicago, Illinois. More than fifty colleagues from a dozen countries gathered for conversation and strategizing. With the leadership of Elisabeth Schüssler Fiorenza and Mary E. Hunt, the group looked critically at how members live out their feminist liberation theological commitments in their daily lives. Four colleagues provided concrete examples. Small group discussion and a lively plenary session followed.

Rebecca Alpert, Associate Professor of Religion and Women’s Studies at Temple University (Philadelphia, PA, USA), offered a thoughtful assessment of Jewish feminist justice work. As a rabbi, she takes on responsibility for public discourse about the deeply fraught situation in Israel/Palestine. She embraces non-violent efforts to overcome the seemingly intractable struggles.

As part of Jewish Voices for Peace, she has found a place for her feminist liberation work. In feminist writers/activists Adrienne Rich, Judith Butler, and Sarah Schulman she finds kindred voices for the complex work ahead. Nonetheless, the difficult situation faced by people in the region and the complicated political/religious calculus for supporters results in problems future generations will tackle.

Rita Nakashima Brock, co-director of the Soul Repair Center at Brite Divinity School (Fort Worth, TX, USA), described her involvement in the Occupy Wall Street Movement, especially its work to Occupy/Decolonize Oakland, California. As a minister, Rita joined other people of faith in non-violent witness that resulted in their arrests. She was part of the strong presence of women of color in Oakland who insisted on economic justice for workers.

Rita finds insight in the work of feminist writer Naomi Wolf who looked at the deeply interconnected power players – business, government, and police – who cracked down on the people camped in the streets. Rita cites the “civic arts” as making possible the exercise of “imagination and creativity” in social movements like Occupy. Young people and social media assure that Occupy’s work is not done until the unjust social conditions to which it points are changed.

Peggy Schmeiser, Director of Government Relations at the University of Saskatchewan (Saskatoon, Saskatchewan, Canada), is a religion scholar who brings her feminist liberation commitments to government service. She engages in both scholarly work and administration. She encourages people “to challenge the perceived sacredness and irrefutability of religious belief and practice, particularly where it gives rise to violations of recognized human rights.” She draws on the work of feminist writer Alison Stuart to highlight the ways in which women’s lack of religious freedom plays out in larger social/legal settings.

Peggy describes her own successful struggle to get her parental status reflected on her child’s birth certificate without going through an adoption process. Her look ahead is to the formation of well-funded alliances of feminist scholars who can have similar impacts on society by bringing religious liberation insights to public policy.

Zilka Spahic-Siljak, research associate at Harvard Divinity School for 2012-13, is a professor at the University of Sarajevo (Sarajevo, Bosnia-Herzegovina) where she specializes in religion, human rights, and peace building. She offered the little known history of feminist liberation theology as it emerged from war and struggle in the former Yugoslavia. The theological work was done by those who responded to the need for “religious answers and comfort for the shame and guilt felt by female survivors of sexual trauma.” Later, the scholarly apparatus of feminist work in religion, and the writings of many well-known colleagues came into play as useful resources for making sense of women’s lives. It is a “bottom-up approach in doing and practicing feminist theology and then learning how to name it.”

Zilka’s report is a startling reminder of how most feminist liberation theological work has been done over generations. Necessity, not ideology, drives it. Nothing less than the achievement of women’s human rights and peace is the goal. That focus links the community in Bosnia with so many others around the world.

Discussion illuminated the many overlapping lines in these diverse presentations. All of them are focused on using feminist theological resources for concrete social change aimed at human rights and peace. The academic work of feminist scholars is an indispensable tool in every case. Response to immediate and crying needs of people, especial women and children, is a trigger for this work in many places. Academic and practical work combine to get results. Connections to larger social/political movements are important to the success of feminist liberation theology.

Participants added their stories and insights, including the importance of focus on the arts and ritual as feminist liberation resources. Cross-generational sharing is key to keeping this work going and growing.

The next meeting of the Feminist Liberation Theologians’ Network will be on Friday, November 22, 2013, 4-6 PM in Baltimore, Maryland, USA, where the AAR/SBL meetings will be held. The exact location remains to be determined, but it will likely be in one of the conference hotels.

At the Baltimore meeting, we plan to launch an exciting new set of discussions. We invite young scholars to identify 3-4 pioneers from their circles whose work in Feminist Liberation Theology has shaped the field. We will invite several of these colleagues to share their pioneers–women from their country, region, field, racial/ethnic group, religious tradition, etc.—so that we can map our history together. We will discuss how this historical work is shaping today’s priorities and programs. We envision this as an ongoing project, which we may be able to publish in the Journal of Feminist Studies in Religion (see the Across Generations project, http://www.fsrinc.org/article/1318 ). Please send your ideas TODAY to water@hers.com.

Feel free to contact either of us for further information  (Elisabeth Schüssler Fiorenza, eschussler@hds.harvard.edu; Mary E. Hunt mhunt@hers.com). We look forward to seeing you in November.