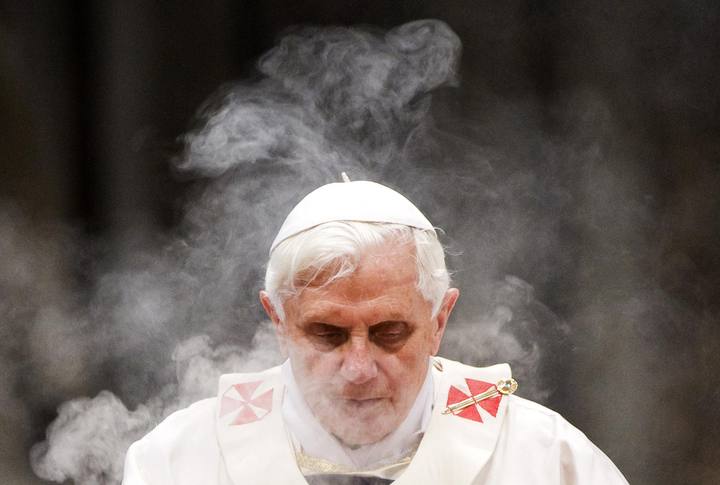 Originally posted on the Feminist Studies in Religion blog.

Patriarchy will get unimaginable amounts of free publicity for the next month as the Roman Catholic Church reshuffles the papal deck. Media commentators will fawn over the proceedings triggered by the unexpected resignation of Pope Benedict XVI. Unrivaled displays of kyriarchy will be beamed into our homes as reporters explain piously the ancient rituals of a men’s club cloning its own head. It will be hard to ignore and difficult to make sense of, even though the outcome is clear. When the smoke subsides after the Conclave, there will still be a single man at the helm.

As a media extravaganza full of color and pageantry, the rituals will be hard to beat. The whole package will serve to reinforce the patriarchal patterns of a religious tradition whose billion adherents deserve better, patterns that are alive and well beyond the walls of Rome. No woman will have a voice or a vote in the Conclave. Sisters and consecrated laywomen will care for the elderly pope, but otherwise this is a men’s scene without any questions asked. The explicit—not just implicit, but explicit—message is that men are in charge: men confect the sacred mysteries, men decide whom to elect, men pray, men reflect the divine, men have it all under their control. This carries over into the larger culture as well. It is no wonder violence against women is epidemic.

Sensible feminist friends ask why I worry about such things. I reply that some women’s birth control and abortions are at stake; some young LGBTIQ people will commit suicide because of this crowd. Abuse survivors live with the consequences of acts perpetrated by priests and covered up by these bishops, cardinals, and now popes (plural). Sounds dramatic, but sadly it is true. Moreover, male entitlement in the world, including the violence done to women and girls, is baptized and confirmed by this symbol system. It has the pernicious impact of making the male-only power model seem holy. Ditto for the racist, heterosexist dimensions as well, not to mention the Euro-centrism and moneyed assumptions that underlie the proceedings.

So how should feminists deal with the endless hype of the next month? I have a four-part strategy that I will be following.

1. Call foul on the process.

First, this is not about a pope but a process. We do not get a lot of windows of opportunity when the press is attentive to things theological. The issue is not a new pope, whether from a developing country or not. In fact, foisting a sinking ship on a person whose community has been marginalized is an old trick, and it does not work.  Rather, what is needed is a wholesale deconstruction of a hierarchal church and the reconstruction of a community that is based on radical equality.

This is a mouthful in a sound bite era. But the important thing is to call foul on the process. When a few men vote without accountability to anyone and when power is centered at the top, the whole framework and process are wrong. If a pope can resign and his colleagues make up the rest as they go along, then a structure can be redesigned. Tradition has no claim on injustice.

The outcome of this election is pretty clear from the outset. Handicapping the race to the tiara is a parlor game, not a serious theo-political analysis. Cardinal electors have been handpicked to reflect a conservative ideology. Even if they decide on a candidate from a developing country, the chances are good that he (no women, remember) will be cut from the same cloth.

The best approach is to deflect such discussion and focus instead on the needs of the world—economic, ecological, and social. Imagine a billion people really empowered to do justice. We could make a real difference. Instead, if Catholics are left to think that their leaders will do justice work for them because they do everything else (like vote for top leadership) that energy will never gather. The world will be the worse for it.

Now is a time to think the edgiest thoughts and articulate them broadly. I will start.

It is time for this global institution, this multinational business called Catholicism to be horizontally integrated with teams of ministers and managers, teachers, and preachers. Beginning in local communities, every adult member would have voice and vote with younger people brought along to participate as their abilities allow. Jobs would rotate so no one would have to be stuck with one task forever. Take a lesson from the retiring pope who is now hinting that he may start to frequent his favorite Roman restaurants again when he is freed from his tasks! Other churches and many religious communities operate this way and it works just fine.

Religion is a common human experience, which reflects both deeply held beliefs and absurd nonsense. As such, it is rich fodder for humor. The humor need not be nasty or cynical, but it can be hysterical as we enjoy the foibles of our shared humanity. I say laugh until you cry at some of this stuff thatSaturday Night Live writers could not make up.

Read feminist comedian Kate Clinton on the papal resignation. Observe the deep theological answer to the question that one calls a former pope: “Ex Benedict” with apologies to the popular brunch food. See what cartoonists are saying. Hey, maybe the Pope resigned because he wants to get married, how do I know! He is resigning on the feast day of Pope Hilarius. Stop me!

The patriarchal religious media-show-on-steroids will play out in the month ahead. Left unquestioned, it will reinforce and reinscribe the worst forms of privilege and domination. But if feminists and friends raise tough questions along the way, we will have seized the moment for some education and social change.