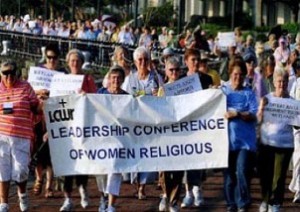 When it comes to the Vatican’s crackdown on women religious, I believe it’s time to declare that for the purpose of this struggle: we are all nuns.

The mandate by the Congregation for the Doctrine of the Faith (CDF) to reform the Leadership Conference of Women Religious (LCWR) via the appointment of an Archbishop Delegate to bring the nuns back in line—below and behind the bishops—has outraged those who respect its rich legacy.

If you can spell Catholic, you are probably asking: how dare they go after 57,000 dedicated women whose median age is well over 70 and who work tirelessly for a more just world? How dare the very men who preside over a Church in utter disgrace due to sexual misconduct and cover-ups by bishops try to distract from their own problems by creating new ones for women religious?

While this story is focused on nuns, it doesn’t stop there. Flowery medieval rhetoric by the Vatican about the nuns’ “special place in the Church,” and the ﬁction that religious women have “full participation in all aspects of the Church’s life” (while ordination is still for men only—come on!) make the dictum especially pernicious.

But it’s really about all of the laity, especially women, who see the world in terms of needs we can fulﬁll, not power we can hold; of radical equality, not hierarchy; of the many, not the few.

Apparently the straw that broke the camel’s back was the collaboration of the Catholic social justice lobby NETWORK, founded forty years ago by 47 nuns from two dozen communities, and the Catholic Hospital Association in supporting the Obama health care plan.

More progressive feminist Catholics, myself included, rued the fact that the plan did not cover the full spectrum of reproductive health care—including abortion. Nevertheless, the pragmatic nuns offered bona ﬁde Catholic support for the proposal as written, over and against the US bishops who, to this writing, continue to oppose the legislation because it includes coverage for contraception without enough exemptions to satisfy them.

The fact that President Barack Obama and members of Congress took the nuns to be normatively Catholic—or at least as Catholic as the bishops—was just more than the delicate souls in Rome could stand.

This latest mandate to reform the LCWR—indeed to put it out of business—has been in the works for years. In a process that began in 2008, the “doctrinal assessment,” as it is known, was aimed at investigating the “serious doctrinal problems which affect many in Consecrated Life.” In the face of wars in several parts of the world, ecological crises throughout the planet, and severe economic injustice, it is morally embarrassing that the Vatican chooses to spend its time on such trivia. But given that the result is aimed at some of the very people whose lives are dedicated to peace making, Earth enhancement, and economic sharing, it is worth clarifying what is at stake.

The crux of the matter, as it were, is that most of the nuns, like many Catholics, have matured beyond the Vatican’s imaginings. The notion that postmodern Catholics assent to “the doctrine of the faith that has been revealed by God in Jesus Christ, presented in written form in the divinely inspired Scriptures, and handed on in the Apostolic Tradition under the guidance of the Church’s Magisterium,” (or, simply, the fathers know best) is simply ludicrous. As one observer asked me, “What Bible do they read?”

The truth is, most Catholics no longer look to Rome for guidance on our personal lives, or anyone else’s. Nor do we live within the narrow conﬁnes of a cultic Christianity, or, as women, accept male leadership and priestly ministry as if theirs were God-given and ours were not. We appreciate the complexity of these matters and strive to create forums in which to listen, discuss, discern, and pray.

In short, our ways of being are as different from the Vatican’s as are our views.

The Vatican knows this, is not pleased, but can’t do much about it. It is trying to put LCWR in the untenable position of having its every conference, publication, and public utterance subject to episcopal veto. The real aim, in my reading of the situation, is to replace LCWR with the Council of Major Superiors of Women (CMSW), a group of conservative, habit-wearing, bishop-obeying nuns that Rome has been cultivating all along. That group’s blueprint for religious life is expressed in The Foundations of Religious Life: Revisiting the Vision, a volume that reads like Vatican ofﬁcials wrote it. Perhaps they did. Although what is more disturbing is that the Vatican has set women up against one another. Conservative women religious collaborated on the Apostolic Visitation and will be appointed to the Archbishop Delegate’s Advisory Team.

The effort to rein in LCWR is meant as much to scare the rest of us into line as to corral the nuns. I can say with conﬁdence that it won’t work.

Roman Catholic Church history is unfolding before our eyes. The difference these days is that tactics Rome employs are transparent. Just as Archbishop William E. Lori was recently rewarded for his work on contraception and “religious liberty” by being named bishop of Baltimore (and will likely become a cardinal soon) we can predict that Archbishop Delegate Peter Sartain of Seattle who is doing this work on behalf of Rome has already had his head measured for a new hat.

Catholics schooled in the ways of justice—largely by the nuns—recoil at the power play this mandate represents. Three things are especially repugnant. First, there is no real discussion. The Prefect of the Congregation for the Doctrine of the Faith Cardinal William Levada asserts that “the ﬁrst step in the implementation of the ﬁndings” is a personal meeting “in a spirit of mutual respect and collaboration.” This is rather fanciful since the LCWR leaders who received the document were not at all sure it was coming. They went to Rome with the intention of engaging in dialogue, not being presented with a fait accompli.

Second, this move seems like an effort to cut off the head of lay people in the Church, beginning with the nuns. The Vatican acknowledges, “the inﬂuence the LCWR exercises on religious Congregations in other parts of the world.” Add to that its political inﬂuence in the US and the hydra that is LCWR was ripe for beheading.

I insist on the larger lay component of this chapter in church history because groups like Women-Church Convergence and Catholic Organizations for Renewal represent far more progressive theo-politics than LCWR. Because those groups and others like them are canonically independent of the Vatican they simply can’t be touched, but they are no less Catholic. LCWR was punished for associating with such groups, including Women’s Ordination Conference, New Ways Ministry, and others of “radical feminism” of my intimate acquaintance. Efforts to squelch LCWR are simultaneously efforts to discredit those groups.

And finally, there’s the current “war on women,” with Catholic bishops leading the charge. In the U.S., it is manifest in the skirmishes around reproductive rights. Young and poor women suffer greatly, but all women are implicated in these policy conflicts. Around the world, we find the Vatican successfully making alliances with other religious fundamentalists to prevent UN-based consensus on women’s reproductive health care. Casualties are many among poor and young women, the very ones the nuns would protect. So it is no surprise that the same bellicose ways operate within the kyriarchal church itself.

The question is how to stop the cycle of violence, how to refuse to cooperate in structures that oppress, how to “engage impasse” as some of the most creative nuns have tried to do.

LCWR will ﬁnd its way with a great deal of support and solidarity from the rest of us lay Catholics and those clergymen who are able to distance themselves from the hierarchy. Likewise if the Apostolic Visitation results are similar to the LCWR debacle, I predict that the individual communities will also ﬁgure out strategies for moving forward.

I am less sure that the Vatican will recover.

May 2012 Prayer: Blessings on Mother’s Day!
Scroll to top