The Feminist Liberation Theologians’ Network met on Friday, November 20, 2015, at the Annual Meeting of the American Academy of Religion/Society of Biblical Literature in Atlanta, Georgia. The theme was “Be Creative, Make Change,” a way to look at feminist liberation theologies and the arts.

More than eighty people from at least ten countries gathered. Participants included seasoned activists and scholars as well as graduate students from a wide range of institutions. We were happy to welcome a wonderful group of a dozen students who were studying our very theme with Professor Rebecca Davis at Presbyterian College in South Carolina (she had been a student of Dr. Katie Cannon). We even had a high school student so our future is bright! We all shared the unique artistic activities we are engaged in as we introduced ourselves. While it makes for a lengthy start to a meeting, the process of meeting one another and learning who is doing what in the field adds a rich dimension to the conversation.

You will find the video of the event here on our website. Please feel free to link it to your own sites. Many people will use the video for teaching and discussion

We are grateful to our speakers:

Katie G. Cannon, Union Presbyterian Seminary: “Antecedents of Womanist Artistic Expressions”
Dr. Cannon described her childhood experiences living under Jim/Jane Crow and now in a situation in which it is critically important to affirm that Black Lives Matter in the face of rampant racism. She gave each participant the beautiful gift of a color copy of her artwork, doodlings that emerge from her prayer. In a way that words might not convey fully, her artwork, with its unpredictable outcomes, expresses deep and often difficult feelings in vibrant colors and bold designs.

These brilliant, graphic images emerge from holy moments full of mystery and meaning. They are her ways to deal with the complexities of hate and faith, the challenges of “Squaring the Womanist Circle,” for which she has created an especially evocative image.

Katie’s work highlights the urgency of the current cultural morass, especially racism, in which U.S. society is mired. She demonstrated the power of creative artistic energy in the service of social change and personal survival. Happily, some of her images have been turned into wearable art. Information is forthcoming on where to procure the art.

Cynthia Briggs Kittredge, Seminary of the Southwest: “A Lot of the Way Trees Were Walking”
Dr. Kittredge introduced her scholarly work in feminist biblical interpretation, but focused on her prayer, where she lets poetry flow. In her morning journaling, she expresses the images and symbols that emerge from her scholarship about the Gospel of Mark, work that is inspired by, among other scholars, the late Jane Schaberg.

Cynthia shared that poetry allows a freedom to play and experiment that is missing in exegesis and preaching. Her report on “the role of the imagination in reading and rereading scripture and about poetry as an instrument of interpretation” gave participants ideas for our own practices.

Like Dr. Cannon, Dr. Kittredge holds together both the analytic aspects and the artistic dimensions of religious studies to articulate a rich and complex message. Her book, A Lot of the Way Trees Were Walking: Poems from the Gospel of Mark (Wipf and Stock, 2015), is an example of how it is done.

Mónica Maher, Latin American Faculty of Social Sciences – Ecuador: “Feminist Liberation Theologies within the Museums of Quito, Ecuador”
Dr. Maher works in Quito, Ecuador, in conjunction with the Foundation of the Museums of the City of Quito. She described how critical feminist religious principles could be applied in civic spaces, transforming museums into places of encounter.

Remarkable exhibits in the local Carmelite Convent Museum, for example, including one on Mariana de Jesus, a national heroine, provide springboards for discussion. Another exhibit on “Transgender Bodies: Distinct Bodies” echoes in a city where a number of trans people have been killed. Still another, at the Casa Ochun in Quito, is an opportunity to bring feminist liberation theology insights to the conversation.

Monica seeks to “represent the diversity of life-giving spiritualties of women’s communities in Quito, focusing on women’s mystical experiences and moral agency, while challenging neo/colonial frameworks of the very definition of the museum itself.” An exhibit on Teresa of Avila is the next site of this work. She and other feminists in Quito are finding myriad ways to stimulate conversations and bring their theo-political commitments to the tasks of social change.

Elizabeth Ursic, Mesa Community College: “Making Things Rite: The Importance of Ritual in Feminist Liberation Theologies”
Dr. Ursic linked her current work with the efforts of feminist colleagues from at least four decades ago. She insisted on integrating the insights of feminist studies in religion, not simply in the academy but in the everyday worship experiences of religious people.

Elizabeth made reference to the 1993 Re-Imagining Conference in Minneapolis, MN, which was a watershed in the field. There, women discussed new language and imagery for the divine, new ethical and theological options, and engaged in new prayer, liturgy, and ritual. The virulent response from conservatives that resulted in threats against persons, loss of jobs and funding, etc. proved just how dangerous and frightening such changes can be to those who are invested in kyriarchal religious understandings.

In her book, Women, Ritual, and Power: Placing Female Imagery of God in Christian Worship (SUNY Press, 2015), Elizabeth describes how individual communities of various denominations embody female imagery of the divine. Liturgy/ritual professionals have an important role to play in bringing academic feminist religious insights to the lived religious experience of contemporary worshipers.

These four diverse and insightful presentations made for lively conversation in small groups. In the plenary session that followed, helpful, hard questions emerged about how intersectional justice struggles can be articulated in art, and whether these are a priority for colleagues. Storytelling as an art form was mentioned as a useful technique. Several people noted the signal importance of dealing with Islamophobia, as well as the urgency of the global refugee crisis. Still others talked about creative and changing pedagogy as necessary to bring feminist religious insights to fruition.

Conversation continued on Saturday morning in what is now becoming a tradition. The Women’s Caucus, as part of their rich offerings, looked at and expanded the work of the FLTN. This year their session was entitled “Cultivating Minds: New Directions in Feminist Pedagogy.” Mary E. Hunt made a report on the FLTN meeting. Papers were offered by:

Mary Hunt and Elizabeth Ursic responded to the papers.

This is a marvelous opportunity to expand the discussion. It adds enormously to the FLTN meeting, which always seems far too short a time to consider the many issues raised. We are grateful for the collaboration of the Women’s Caucus and hope to continue this format in 2016.

The next meeting of the FLTN will be held on Friday, November 18, 2016, at the AAR/SBL Annual Meeting in San Antonio, 4-6 PM. Please join us and please feel free to invite your colleagues and/or students to do the same. The topic will be Intersectionality and Political Action, a timely one shortly after the U.S. national elections. We will look at the kyriarchal structures that oppress and feminist theological resources that can be conducive of liberation. We hope to focus on concrete projects and groups that are engaged in these struggles. We seek speakers who will articulate those matters, and welcome your suggestions (please send to mhunt@hers.com).

All good wishes for the New Year. May it be a time when our commitments to peace and justice double, and our numbers increase as we bring feminist religious values to the work of social change. 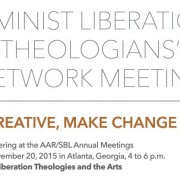