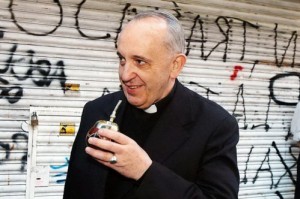 What The Church Needs More Than a ‘Good Pope’ by Mary E. Hunt

The Jesuit journalistic coup, quickly known as the Pope’s interview—officially “A Big Heart Open to God”—will take years to parse. Early headlines heralding a new moment in church history are largely correct, but not necessarily for the reasons cited. While it is true that Pope Francis has downplayed some of the hot button issues: “abortion, gay marriage and the use of contraceptive methods…it is not necessary to talk about these issues all the time,” it’s also true that in no way did he disavow them: “The teaching of the church, for that matter, is clear and I am a son of the church…”

I would not advise holding one’s breath until those official teachings are replaced with sensible, respectful recognitions that adults make their own choices on matters of personal morality. Rather, I observe that the trajectory that millions of lay Catholics have set is finally being joined by some clerics, including this most highly placed one. My caution is simply not to miss the forest for the trees.

Catholics have been voting with their feet for decades. In the U.S., for example, former Catholics are the second largest denomination right behind current Catholics. Catholics use birth control, have abortions, and love in same-sex relationships along with everyone else. This pope seems to recognize these facts, and given his predecessors’ actions, that is news.

It remains important, however, not to think that simply because the pope says something that it is so—even if one likes it. To do so is to fall into the trap of giving even more weight to the papacy, more deference to the hierarchy, more power to those in power. No, something is sobecause the people, whom this pope freely admits are at the core of the church along with bishops and himself, have discerned and lived into new Catholic ways of thinking and being. That is what the sensus fidelium means.

This interview strikes a chord not because the pope has suddenly figured out that postmodern people do not take kindly to being treated disrespectfully. Rather, it’s caught fire because he’s articulating what groups like DignityUSA, Catholics for Choice, Women-Church Convergence, and others have been saying for decades; namely, that the heart of Catholicism is divine love and the soul of Catholicism is divine justice. If the church is “the holy, faithful people of God,” then it’s the many voices and not only the papal voice that speak truths, in the plural.

The interview’s complexity arises from the overlay of Ignation spirituality that forms Francis’ spirit and psyche. It’s a language and symbol set all its own—heavy with “discernment” and reliant on prayer as a means of knowing. The interviewer tries to interpret it at times (who knew that Peter Faber [1506-46] was such an influential fellow?), but what stands out is how Francis is imbued with the customs and governance style of the Society of Jesus.

The notion of a “superior” is not foreign to him. Every Jesuit has one. But he understands the need for collegiality in decision-making, respect for individuals as they figure out (read: discern) their way. What remains to be seen is if structural changes in the institutional church, inclusive forms of participation—yes, democracy—will flow from his words. There is a logical contradiction in imposing a new model, even a democratic one, from on high. Will Francis be as good a theo-politician as he is a pastor? It will take some doing to transform without repeating the autocratic ways of the past. One can only hope.

I found three things in the interview that I could affirm warmly, and three that left me cold. Each one invites far more reflection than a “day after” commentary is capable of, but I offer them to add different dynamics to the global discussion unleashed by this interview.

First, Pope Francis is a person who freely admits that he can change his ways. I admire that. Having been wrong more times than I can count, I understand a person who admits that while at the time s/he did what s/he thought was right, in retrospect it was dead wrong. Pope Francis acknowledges that when he was the provincial of the Jesuits in Buenos Aires his leadership style was authoritarian. He chalks it up to his youthfulness and circumstances, but he has the good sense not to repeat that mistake now, when it could do even more damage. This is welcome. He is correct that based on his history many of his Latin American colleagues fear that he will not make doctrinal changes. Authoritarianism is not simply how one treats people, but also how one treats ideas.

Second, the compassion, humanity, and simple lifestyle that Pope Francis manifests is refreshing after decades of John Paul II and Benedict XVI’s personalities and actions. At the same time, Francis demonstrates in the interview that he is a highly cultured man. He takes music, art, literature, and film seriously as culture shapers, as rich gifts for enjoyment and insight into the human condition. He’s very Argentine that way. Going to the movies in Buenos Aires is as common as going to mass. Teatro Colon is a world-class opera house of which Portenos (residents of Buenos Aires) are justifiably proud.

Third, postmodernity is not lost on Francis. Woven through the discourse of this lengthy interview are indications that the many sciences, not just theology and philosophy, are sources for religious reflection. Obviously his experience at the World Youth Day in Brazil was formative. He understands the differing roles of people of varying ages; he realizes that younger churches have unique characteristics, older churches their own charm; that vigor and wisdom, ancient and new, all have their place; and he affirms “real, not ceremonial consultation” as the way forward. These are contemporary ideas that his immediate predecessors did not understand—or if they did, they did not accept them.

All of this, and many other strands of a rich and provocative interview portend something new for Catholicism. Still, I would be remiss as a theologian if I did not also offer a critical view of some aspects that I find troubling.

The weakest part of the interview is the section on women. It is amazing how little this pope seems to know about women, other than his grandmother Rosa whom he places right next to the Virgin Mary. The very fact that women are set apart as special, different, seems to imply that everything else he says about church, morality etc. is for and about men. This is a serious methodological flaw. Either women are part of “the holy, faithful people of God,” and thus the church in the full sense, or they are not.

If women are human beings like men, not different from men in some mystical way that can result in discrimination, then ordination, reproductive justice, contraception and the like are choices women can and should make. Catholics do not need “a profound theology of the woman,” but a clear, engaged reading of feminist work in religion that is among the most exciting theological production today. The very framing of the question about women is dubious. Difference unto discrimination is a slippery slope.

Little change will come to the injustices a kyriarchal church perpetrates on women until there are more insights than endless references to women’s motherhood, Mary as more important than bishops, the institutional Church as Mother, and so forth. Francis might consult some women for clarity. I had a fine mother and I try to be a good mother, but enough is enough on mothers. What about seeing women as persons, human beings, agents of their own lives? Likewise, I await a clear definition of ‘female machismo’ that has him so worried. How about worrying instead about plan old ‘machismo’ that has caused such havoc in the world?

It is intellectually embarrassing to hear a man who is so conversant with music, literature, and poetry have such a paltry vocabulary when it comes to women. Thus far, Francis has not had any public conversation with a woman church leader of any sort. The continued oppression of U.S. women religious, allegedly approved by him, is a negative sign as well. But maybe it will fall into the category of small things to which he will pay little attention. Regardless, on the day the papal interview came out the Church of Ireland, part of the Anglican Communion, appointed its first woman bishop ever in Britain or Ireland. Note that her diocese is Kildare and Meath where St. Brigit was ordained a bishop in the fifth century. I hope the Pope noticed and sent congratulations.

A second issue I find troubling is the lack of transparency about the shape of the institutional church. The cardinals realized on the resignation of Benedict XVI that the institutional church was in ruins. Its creditability is gone due to financial scandals, pedophilia by priests, and cover-ups by bishops. Frankly, no one cares much what the Catholic Church officials think on the big issues—war, the economy, racism, ecology, etc. Sometimes I wish they did! So from a purely business perspective, they have chosen a CEO who is leading a charm offensive that is working. Why not admit it? Perhaps this will be the subject of the next interview if the Jesuits have the gumption to ask him.

Moreover, it’s important to realize that “election” of a pope is not very different from election of a president or other top-ranking official in a hierarchical organization. S/he brings with her/him a whole entourage of lower ranking officials, much like in the U.S. when the Republicans are defeated by the Democrats or vice versa. The winner brings a team. So now it’s time for the people who lost the election to get out of the way and let Francis govern.

Conservatives are not pleased with his views, and while progressives generally like his tone and content they want structural changes to back them up. My hope is that out of all of this will come not more emphasis on Good Pope Francis, and by extension more papal power, but a new model of church in which his role as pope is as a symbol of unity, not authority.

A third area of concern is the major matter of church doctrine—what this pope jesuitically says he affirms as a “son” of the church. If that’s the case, what hope is there that things will be substantively and structurally different in years to come? If some issues are closed—not just the ordination of women but how other faith traditions are understood; not just same-sex love, but what we mean by Eucharist—is this interview simply a puff piece, a case of the Jesuits promoting their own and their own promoting Jesuits? Is it meant as a way to attract people back to a church that may have a kinder face but just as steely a heart? Is the good will it has engendered trustworthy? The Roman Catholic Church has been around for several thousand years for a reason. I hope this interview is a beginning not an end of a new moment.

These serious reservations notwithstanding, my early read of “A Big Heart Open to God” is hopeful—to be otherwise would not be Catholic. Moral theologian Daniel C. Maguire gets it right when he says here on RD, “Never before has so much fresh air flowed through musty Vatican halls.” Let the dialogue get bigger and the table grow more crowded.