While coverage of Pope Francis for his Washington, DC visit was in high supply, there was a significant story line missing from the week’s news report.  Tuesday, September 22nd, a bus full of passionate and determined nuns and supporters pulled into the National Mall a full hour before the Pope arrived. NETWORK’s “Nuns on the Bus” had just completed another successful tour of social justice hot spots around the country.  The 12-day, 8-state tour included stops in St. Louis, Kansas City, Little Rock, Nashville, Indianapolis, and Columbus to name a few.

Days on the tour were filled with town hall meetings, small group discussions and lots of storytelling.  The sisters and their colleagues listened to the stories and concerns of city residents to understand some of the real problems that residents face on a daily basis. Problems ranged from needing better public transportation, to racism and threats of deportation.

Simone Campbell, executive director of NETWORK, along with other members of the bus began the rally in DC by sharing some of the stories they had heard while on the road. The pain, suffering, and heartbreak that filled each story was intertwined with  a sense of hope. By sharing the stories, and by concrete actions to alleviate problems, political and policy changes may be that much closer to becoming a reality and to being useful.

Regardless of how little airtime the sister got during what became Pope Week, they certainly left an impression.  They were a group of women, not one on top but a team working together, bonded by the desire to produce change in this country. They were a welcomed shift both in form and content from sights of priests, bishops, and  cardinals all pointing to one pope. “ Nuns on the Bus” show that it takes everyone working together, not one super star, to do the work of justice. 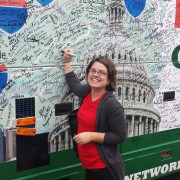 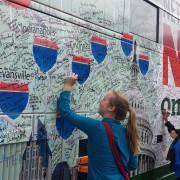 “take the pledge” by signing the bus.

October 2015 Ritual: Prayers for Women with Cancer
Scroll to top