Sally Ride: Reaching for the Stars 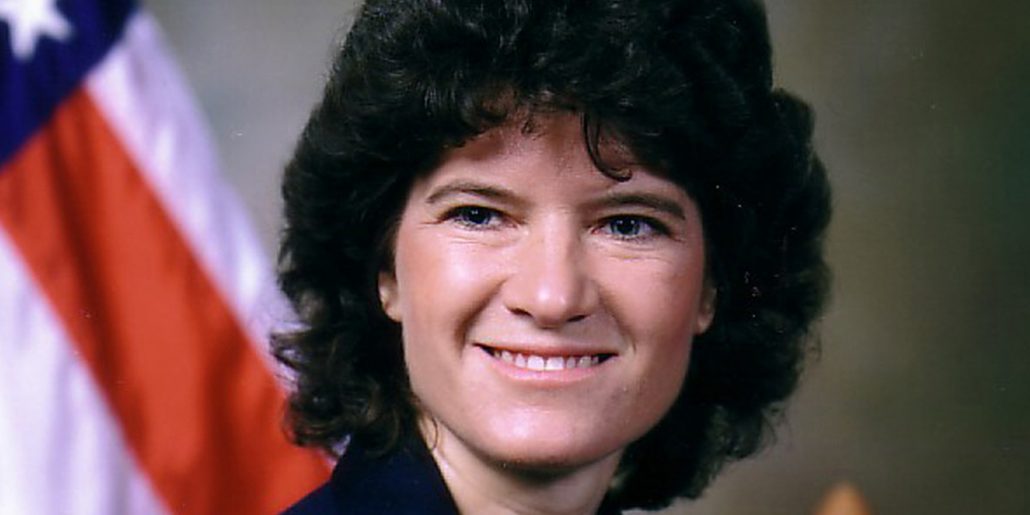 We continue our monthly ritual series in raising up Sally Ride, an inspiration to generations of women and girls with an interest in STEM (Science, Technology, Engineering, and Mathematics) and a sense of adventure. In this ritual we will take a journey to honor a true advocate for the education and respect of women and girls.

Star, candles, books; a cloth that represents space, stars or the sky; popcorn.

Tonight we raise up Sally Ride, the trailblazing first American woman in space, because this is her birthday month. Happy birthday, Sally, on May 26.

Sally was interested in science since she was a child. She earned bachelor’s degrees in physics and English and a Ph.D. in physics from Stanford University. In 1983 she became the first American woman to fly in space, when she made a six-day flight aboard the space shuttle Challenger. She made her second trip into space in 1984.

Dr. Ride was a professor of physics at the University of California, San Diego. She cofounded Sally Ride Science in 2001 along with Dr. Tam O’Shaughnessy, Dr. Karen Flammer, and two like-minded friends to inspire young people in STEM (science, technology, engineering, and math) and to promote STEM literacy. Sally died on July 23, 2012. In 2013, Sally was posthumously awarded the Presidential Medal of Freedom, accepted by her life and business partner Tam O’Shaughnessy.

Sally reached for the stars, and now she is one.

Chant/Song: “When You Wish Upon a Star,” Sung by Julie Andrews

A Tom Brokaw interview with the Ride sisters before Sally flew: (Pg. 18)

Brokaw: Are you particularly religious?

Sally: My sister got most of the religion in the family.

Bear, Sally’s sister: She’s her own person and she certainly has her own belief system and it doesn’t have to fit into mine.

Brokaw: Will you see this flight in any spiritual way?

Brokaw: A triumph of man and technology?

Bear: Of woman and technology.

“I had no idea what to expect. I mean, what do you do when you’re an astronaut? Who knows? I don’t even remember having specific goals other than to fly in space!”

Lynn Sherr: Do you feel under any pressure as America’s first female astronaut?

Sally Ride: I do feel that there’s some pressure for me not to mess up.

Q: Dr. Ride, apart from the obvious differences, how do you assess the difference in men and women astronauts?

A: Aside from the obvious difference, I don’t think there are any.

“All adventures – especially into new territory – are scary…”

Joyce Ride, Sally’s Mother,  tries to explain to the world what she and her husband Dale did right in raising their daughters.

“In a way you could look at it as neglect,” she laughs. “Dale and I simply forgot to tell them that there were things they couldn’t do. But I think if it had occurred to us to tell them, we would have refrained.”

“They should let girls be who they want to be, and not pay any attention to the stereotypes.”

Excerpts from Sally Ride: A Photobiography of America’s Pioneering Woman in Space by Tam O’Shauhnessy © 205.

“It feels like your arms are made of lead. The notebook in your lab seems to weigh a ton. Then suddenly, the shuttle engines stop. The lead in your arms vanishes. Your arms are lighter than air, and your notebook floats up in front of your face. You are in space.”

“I started to feel heavier and heavier as gravity slowly pulled me into my seat. It was hard to lift my hand or hold my head up. Outside the windows the shuttle was engulfed in a fiery orange glow as we blazed through the air.”

“NASA should embrace Mission to Planet Earth. This initiative is responsive, time-critical, and shows a recognition of our responsibility to our home planet. Do we dare apply our capabilities to explore the mysteries of other worlds, and not also apply those capabilities to explore and understand the mysteries of our own world – mysteries which may have important implications for our future on this planet?”

Walked and ran on her toes.

Clicked her tongue to music (instead of humming or singing).

Ate popcorn soaked in milk with a spoon.

Never ripped the top off a sugar or tea packet (it might float away!)

Woke up happy almost every day.

Lived in the moment – seldom thought about the past or the future”.

“Sally was a hero whose brilliance and focused work helped her to “reach for the stars” as she advised the rest of us to do. So why was her loving relationship with a fine woman something to cover with a space blanket?….. What are we doing about the fact that we can visit outer space but we cannot create enough social space to accommodate the range of ways people love? Abolishing heterosexism thus creating space for love is as fitting a way to honor Sally Ride’s memory as naming a ship or a lunar impact site after her. Solidarity not outing is the obvious strategy. One doesn’t have to be a lesbian or a woman, whatever those words mean now, to participate.”

Sally left behind a better world because she… (Pg. 144)

Was true to herself.

Inspired girls and boys to be themselves, to be courageous, and to reach for their dreams.”

What reflections do you have after listening to Sally? What stars did you wish upon in your life, and what stars are you encouraging in the eyes of those younger than you.

Sally loved popcorn. Let’s eat it as we share.

For challenging us to reach for the stars.

For being America’s first woman in space.

For opening doors to students in the science, technology, engineering and math fields.

For loving women, and reminding us that we must create enough social space to accommodate the range of ways people love.

For showing the world, especially young girls, that women can reach for the stars and fly into space.

Star light, star bright, first star I see tonight.
I wish I may, I wish I might have the wish I wish tonight.

In Memory of Her: Berta Cáceres
Scroll to top