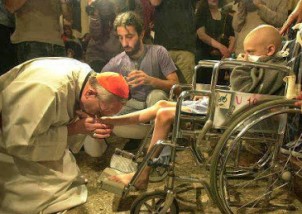 A pope who loves and is easy to love—so what’s the problem?

Will Pope Francis be featured on the cover of Sports Illustrated engaging in “spiritual exercises” in next month’s issue?

Given the spate of media attention he has received in the U.S. market, I will not be surprised by anything. Just to head off distractions, let me stipulate that I do have a heart, and approve of the personal direction of this pope: a simple lifestyle, a commitment to the poor, a soft touch with those who are young or ill, all indicate a fine human being, indeed what Christianity would hold up as a model.

I note only that his predecessor popes and some of their episcopal sycophants gave the job such a bad name that the bar is low. Undoing their structures and policies, especially regarding criminal sexual scandals and Vatican finances, will take longer than these first nine months of the Francis papacy.

The phenomenon of a pope becoming a pop culture icon is fascinating, troubling, and not a little confusing. Here are a few of the puzzles I’m struggling with as I try to make sense of the current Catholic religious scene.

All of the enthusiasm about Francis’ style does not change the fact that the institutional Roman Catholic Church is a rigid hierarchy led by a pope—the warm feelings in response to Francis shore up that model of church by making the papacy itself look good. To my mind, this is a serious danger.

Even when I agree with his statements about eradicating poverty, becoming friends with our enemies, and the like, I have scruples about giving the new pope too much praise—as if other people have not said the same things and more for eons.

The papacy is the ultimate bully pulpit, but it works both ways—on things that are progressive and things that are conservative. It is risky to embrace papal remarks when one agrees, only to live long enough to have another pope undo them.  Conservatives are living that reality as I write. The point is to be mature enough to set our own moral trajectories and decenter papal authority.

All of the efforts at church reform—whether the ordination of women, married clergy, acceptance of divorced and/or LGBTIQ persons as full members of the community, and many others—are based on the assumption of widespread lay participation in an increasingly democratic church. From that perspective, it does not make sense to ordain more people to a closed clerical caste headed by the Bishop of Rome, however socially progressive he may be.

Rather, beneath all of these movements for change has been the working assumption that a new participatory, democratic administrative model must evolve. Key to that model is a deeply diminished authority role for the pope and a much stronger emphasis on the pope’s function as a symbol of the unity of the whole church. That is not something that anyone accomplishes by kind deeds, but by structural change.

I understand that neither Time nor The Advocate’s editors worry about theological problems. Their task is to move magazines. But as a theologian, I must point out how difficult their choice of cover matter makes my job of institutional change. If I say something negative about the current pope, then I am a wet blanket who cannot embrace the good when I see it. If I say something positive about Francis, then I am reinforcing and reinscribing the very power structures that I think are deeply problematic for a healthy, functional, and inviting church. This is a conundrum.

Of course there is a difference between a person and a role. But in this case, I daresay most people outside of Argentina would never have heard of a certain Jorge Mario Bergoglio if he had not been elected pope. It is the person in the role that matters.

Ask millions of former Catholics why they now constitute the second largest denomination (the Roman Catholic Church remains the biggest one) in the United States. My only answer is that at the level of teaching and structure nothing—but nothing—has changed this year.

A second difficulty flows from the first, in that nothing has changed for women or LGBTIQ people with regard to Catholicism during the early months of this papacy. Nor is there much prospect on either issue given what the pope has said publicly.

Regarding women’s ordination, Francis has been clear: “On the ordination of women, the Church has spoken and said no. Pope John Paul II, in a definitive formulation, said that door is closed.” Just what is it that the media see as so promising here? Or, is it the case that what happens to Catholic women does not really matter much?

Given that more than half the world’s poor people are women and children, this gives me pause about praising too soon. If one cannot act justly toward those nearby and similar, why would one act justly to those at a distance who are very different? I admit to confusion that borders on incredulity

Then there was the speculation that if Francis really wants to include women in decision-making he could do so without much fanfare by adding a few to the College of Cardinals that will elect his successor. His reply was telling: “Women in the Church must be valued, not clericalized. Whoever thinks of women as cardinals suffers a bit from clericalism.” Whatever could he mean?

One might be tempted to think that he was dissing cardinals. But on closer inspection, it is clear that women ought not to book tickets to Rome just yet. Juxtaposing “valued” and “clericalized” is odd at best, pernicious at worst. In a church in which ordained male clergy have jurisdiction— that is, authority to make decisions about things that matter—to claim that women who cannot be ordained are valued is a hard case to make. Valued for what and how?

We have heard from Francis all about women’s superior qualities, and how Mary trumped the apostles in importance. But who is naïve enough to believe that without any say in how the church operates locally or globally Catholic women are valued? To say that to think about women cardinals is a species of clericalism is beyond logical explanation.

The same goes for the now-famous “Who am I to judge?” line about same-sex love that won Francis such favor in both mainstream and gay press. Two intertwined issues emerge. One is that every human being is called to judge what is good, to recognize love when they see it, and to acknowledge the value of committed relationships as part of what constitutes a strong social foundation. To assume that “judge” always means something negative, punitive, rejecting is simply to fall into the Catholic trap that has ensnared so many for centuries.

I understand that many people, especially LGBTIQ people, have been hurt by the judgmental (in the negative) teachings and practices of the Roman Catholic Church. But I respectfully suggest that we keep some perspective. We expect that human beings will affirm what is good, not abdicate their responsibly to do so in the public forum, even if they are the pope, for fear that they will offend those who do not affirm the same goodness.

Moreover, the very phrasing of the pope’s seemingly revolutionary comment as a rhetorical question stands in sharp contrast to his usual blunt, declarative approach to economic issues, for example. The turn of phrase piqued my curiosity, aroused my suspicion about what he really thinks about same-sex love. I want him and everyone else to judge love positively where and when they find it.

A second critical issue raises my suspicion even higher. Auxiliary Bishop Charles Scicluna of Malta alleged that Pope Francis said that he was “shocked” by the notion of same-sex adoption as part of a move toward civil unions in Malta. He claimed that the Pope “encouraged me to speak out” against it. Mr. Scicluna has done just that, though it is not clear that other bishops of one of the most Catholic countries in the world (also one of the smallest) agree.

Perhaps this pope doth protest too much. His native Argentina has same-sex adoption. But perhaps he thinks that Malta is simply too fragile to withstand the earthshattering impact of two people of the same gender loving and caring for the same child for a lifetime.

It is perplexing this papal doublespeak.

A third conundrum of contemporary Catholicism is the remarkable, even enviable public relations success, not to say coup, that the papacy of Pope Francis represents.

I am not suggesting that there is no substance to Francis’ agenda, that change does not underlie it. Conservatives would not be so hot under their collective collars if that were not the case. But I am cognizant of the very powerful public relations machine that has turned an ecclesial ocean liner on a dime, transformed an all but written-off patriarchy into one of the most inviting, benevolent monarchies the world has seen in modern times.

But substantive structural and doctrinal issues do not evaporate just because the pope does not wear Prada.

Surely some of the “credit” for this PR blitz goes to former Fox News and Time writer, Opus Dei member and Midwestern Catholic, Greg Burke. He became senior communications advisor to the Vatican’s Secretariat of State in June 2012, well before the new pope took over.  Mr. Burke is commonly associated with moving the papacy toward a more hip, social-media savvy approach to getting out its word. It works. Papal tweets are new. But more important than 140 characters at a time are the remarkable visuals, photo ops that don’t quit, moving gestures of a humble, caring man projected for the world to see and imitate. Only a craven critic would pass over these as trivial.

Still, I am left with a feminist theologian’s duty to think about (perhaps overthink) the scenes. Is this the stuff of real change or is it a way of shoring up a model of church that has endured for centuries? Are those who reject the kyriarchal model as I do simply to be told like other protesters before us that we can go elsewhere when we are as Catholic as the Pope?

Where are the women theologians called in to consult, the young people invited to discuss their lives and choices? Where are the lay people who might preach at the pope’s daily mass so he would listen instead of speak sometimes? Where are the lesbian and gay seminarians to explain the facts of life to an old Jesuit who entered the Society of Jesus before gay was gay? Where are the survivors of sexual abuse by priests and cover-ups by bishops to whom the institutional church, beginning in Rome, owes reparations? I do not see signs of them anywhere, nor do I expect to any time soon. Opus Dei is not a clothing line, but a deeply ideological Catholic group that stands for very conservative religious values. Rachel Maddow was not tapped for the media job for a reason.

Granted nine months is a short gestation even for a newbie pope. But waiting quickly becomes complicity when there is so much at stake—so many lives to be enhanced and spirits to be warmed, so much damage to be undone and suffering to be prevented.

As we saw with the rapid exit of Pope Benedict XVI, popes come and go. Older people do not live and cannot work forever. So, while I wish Francis “multos annos,” I am realistic enough to know that what he does to bring about change in the Roman Catholic Church and in the world he had better do now while the window is still open and he can still see out of it.