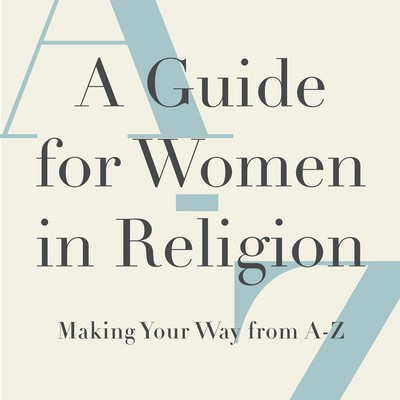 Need insight on how to navigate study and work in the field of religion? The second edition of A Guide for Women in Religion: Making Your Way From A to Z is now available. The Guide, edited by Mary E. Hunt, Kecia Ali and Monique Moultrie, made its debut at the American Academy of Religion in November and is “the third generation of efforts to share our collective wisdom,” Hunt said.

The book serves as a companion for women in religious studies, a guide for everyone from undergraduates to retired professors. A recent press release by publisher Palgrave Macmillian describes the Guide as influential when “seeking a job, preparing for tenure, mentoring or being mentored, entering the publishing world, figuring finances…This volume reflects the diversity of women’s experiences, the range of opportunities, the pitfalls and promises of religious studies that span ministry, academia, and activism.”

Each editor of the latest Guide certainly has wisdom to spare. Hunt, who edited previous versions, is co-founder and co-director of WATER (Women’s Alliance for Theology, Ethics, and Ritual) in Maryland; Ali is associate professor of religion at Boston University; Moultrie is assistant professor in the Department of Religion at Georgia State University.

The first version of the Guide, published in 1992 under “Guide to the Perplexing: A Survival Manuel for Women in Religious Studies,” was edited by Hunt, Rita Nakashima Brock, Kelly Brown Douglas, Paula Friedriksen, Adele McCollum, Judith Plaskow, James Poling and Susan Thistlethwaite.

In 2004, Hunt edited a new version with Rebecca Alpert, Karen Baker Fletchers, Valerie Dixon, Janet Jakobsen, Rosamond Cary Rodman, and Katharina von Kellenbach. “A Guide for Women in Religion: Making Your Way from A to Z” was a new format inspired by the old, not chronological from kindergarten to emerita, but an attempt to broaden the notion of what it means to go to grad school and have a career in religion: publishing, non-profit sector, politics, business, library/information technology, among many other entries.

Hunt cited “all the editors as women’s names get lost all too easily,” thankful for the generosity of those foresisters in the field for enabling them to create this guide “to orient future colleagues and to invite their collaboration.”

“We canvassed many colleagues to get a broad sense of what is going on,” Hunt said. “We faced the job market squarely so our earlier decision to broaden beyond tenure-track jobs was only reinforced; we discussed our own experiences across racial, religious, age differences and tried to be faithful to a collective process in what we wrote.”

They recognized that while many things had changed, such as the impact of technology, some fairly basic things like sexual harassment and racism still remained.

But the guide, Hunt said, is meant to be an invitation to colleagues in the field, especially newly arriving colleagues, to bring their unique and valuable insights to bear. She suspects there will be a fourth guide in time for which the experiences are simply being hatched right now.

“While there is still much discrimination [against women in religion], there are many signs of the progress that we’ve made,” Ali said. “The fact that we are now at the third edition of some type of guide attests to the persistence of women in pursuing professional excellence and transformation in the field.”

“A Guide for Women in Religion: Making Your Way From A to Z” is available for purchase through Palgrave-Macmillian as well as on Amazon. If purchasing through Palgrave, try using the discount code PM14THIRTY for 30% off.

Celebrate #GivingTuesday and Donate to WATER