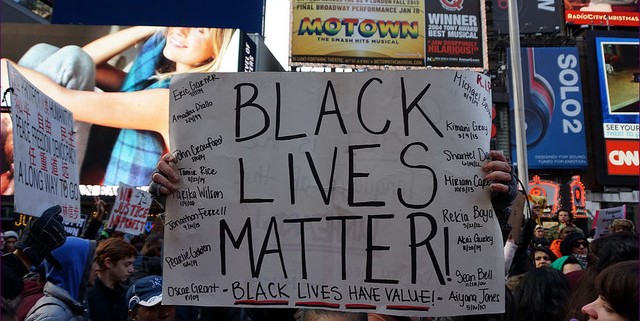 LGBT Black Christians and faith leaders join tens of thousands of historically Black congregations/denominations and allies to wear black to church on Sunday, December 14 in response to police brutality: “Black LGBT bodies must matter, too!”

Black America faces an unspoken agenda of terror and racism. In response, tens of thousands of historically Black congregations/denominations and allies across the country will be wearing black on December 14, 2014, to protest the criminalization, disproportionate incarceration, and killing of black and brown people by law enforcement. As Black lesbian, gay, bi-sexual and transgender (LGBT) religious leaders, we are all too familiar with oppressive systems that discriminate and kill.

Over the last six years, fair minded Americans have moved the country to elect our first Black president, opened the doors of marriage to same gender loving people in over 35 states and Washington D.C., began a national conversation on the inclusion of transgender brothers and sisters, and confronted the need to finally address immigration reform. This decided shift toward progressive social values has been met with an escalating conservative backlash most abhorrently embodied in the aggressive policing of Black and Brown bodies. The conservative climate has also led to rampant unresolved murders of transgender people.

Action: As more than 150 Black LGBT faith leaders, we commit to mobilize our LGBT led congregations, denominations, and faith communities to participate in a day of solidarity and to pray for healing, justice, and holy boldness as we respond as a united front. We call for the Black community and our allies to stand with us. In turn, we sign on to the following actions:

We, as LGBT religious leaders across faith traditions and across our country have created an historic alliance among ourselves as we assert that ENOUGH IS ENOUGH! We declare and decree our wholehearted commitment to participating in a new wave of sacred resistance to power structures, which demean black bodies, and reinforce policies, that undermine the life, and vitality of our community. We uphold that All Black Lives Matter and condemn all the ways Black bodies are marginalized, and subjected to hostility.

To that end, we call for all Black religious voices to unite together across the diversity that exists among us to proclaim that we stand on the side of justice for all and that every life is sacred. To do so we must connect the dots between the forms of oppression that rise up from the toxic root of racism. We stand against oppressive practices wherever they exist and are committed to the practice of peace and we encourage our communities to find common ground.

We commit to moving from the margins to the middle as we articulate an integrated multi-issue justice movement embracing the totality of concerns impacting Black and Brown bodies: police brutality, mass incarceration, violence against trans people, income inequality, immigration discrimination, malnutrition, gun violence, the assault on reproductive health, unequal pay for women, inferior education, disproportionately high HIV/AIDS, Ebola, the homeless crisis among black gay youth, and the lethal exportation of homophobia to Africa by the Religious Right.

As demonstrators around the country are organizing themselves to speak truth to power, we join our voices to this chorus of justice seekers and stand in solidarity with all who seek to change the ways our communities are oppressed and disenfranchised.

In response to grand jury decisions in Ferguson, Missouri, and Staten Island, New York, and in other parts of the country where Black lives are ended senselessly over minor offenses or for no offense at all, our hearts are broken by the lack of justice for the victims of violence at the hands of law enforcement. We grieve with the families in St. Louis, Cleveland, and New York City who have lost their loved ones. We are also dismayed by militaristic police tactics that try to silence the voices of peaceful protesters reacting to the lack of justice from our legal system.

As religious leaders, we lift our voices in solidarity with the families, protesters, and all those who stand against discrimination. We affirm that the walls of racism, homophobia, transphobia and injustice must be pulled down in our communities, nation, on the continent of Africa and throughout the Diaspora.

Beyond Words: A Critical Response to the Non-Indictment Decisions