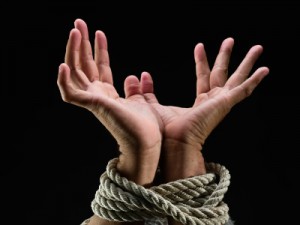 Stories of Trafficking
Excerpted from www.polarisproject.org

Amanda learned that her cousin was with a pimp who was advertising her for commercial sex on various websites.

A teacher became concerned about one of her students, a 14 year-old girl, and spoke with classmates who directed the teacher to multiple postings advertising the young girl for commercial sex on backpage.com.

A woman in Cameroon contacted the National Human Trafficking Resource Center about a friend who had moved to the U.S. several years ago whom the caller feared was a victim of domestic servitude.

With four children between them and a 16-year relationship, Mari couldn’t imagine leaving Darrell. She didn’t see any viable options, even though he was physically abusive and forced her into commercial sex when money was tight.

Brittany met a man at her local mall who offered her a job at his restaurant. Instead of working as a waitress, Brittany was forced to sell sex in a hotel room.

Holy Compassion, you who hear the cries of those in anguish,
Be with us now to bring them to safety and to speak out against those who exploit.

Holy Love, you who shout with us “No” to human trafficking in all its forms,
Be with us now to restore freedom to the trafficked and their families.

Holy Justice, you who rage with us against the injustices of trafficking,
Be with us now to take action to prevent and end this violence.

Holy Wisdom, you who know the worth of every human being,
Be with us as we erase this sinful practice from the face of the earth.

Recognize the signs of trafficking:
www.polarisproject.org/human-trafficking/recognizing-the-signs

When you travel, check out the “Human trafficking letter to hotels” developed by the Sisters of Mercy Justice Team:
www.mercyinvestmentservices.org/component/content/article/476

Learn more about human trafficking by reading the recent issue of Centerings on trafficking by the 8th Day Center for Justice:
www.8thdaycenter.org/pdf/centerings/WinterCenterings2011FINAL.pdf

Use prayer services from the Intercommunity Peace & Justice Center: www.ipjc.org

Watch Lives for Sale, a documentary on immigration and trafficking produced by Maryknoll and Lightfoot Films in association with Faith & Values Media:
http://www.livesforsale.com/index.html

Encourage airlines to sign The Code of Conduct for the Protection of Children so that their employees will be alert to the warning signs that traveling children might be victims of trafficking.