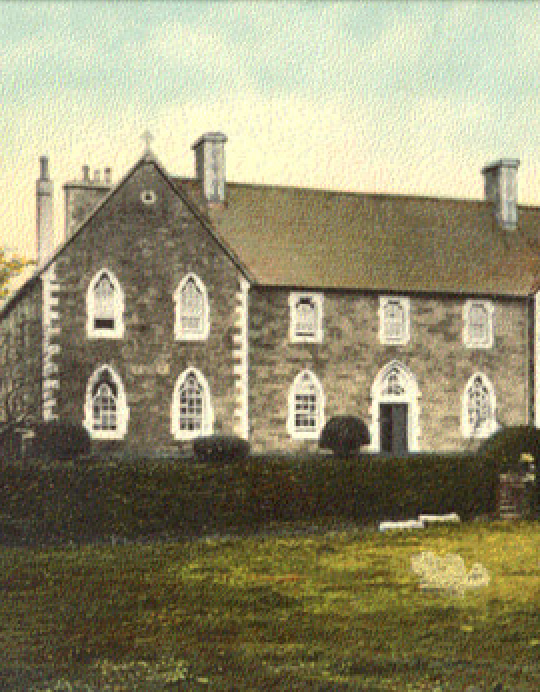 Welcome one and all to WATERtea October 5, 2021 with Sheila Curran, a WATER friend and colleague from Ireland. A special welcome to those who are new to WATER’s events, especially to the tea format which is a hybrid form we developed as Covid limited other ways of getting together. We also offer a monthly mediation, liturgy, and talk about academic subjects but we found we needed this hybrid way to focus on topics of common interest and concern in a more personal, informal way.

We acknowledge that we are all on indigenous land. Silver Spring, Maryland, where WATER is located, is on the traditional and contemporary land of the Piscataway and Nacotchtank (sometimes known as Anacostan) peoples, the original stewards of this territory. We are committed to making clear the names of these lands and the community members from these nations who reside alongside us. We acknowledge the trauma that is deeply imbedded in the foundation of this country. We recognize the deep historical, spiritual, and personal trauma that has impacted indigenous communities, communities of color, as well as immigrants and other peoples.

WATER PROGRAMS are aimed at supporting and igniting social change. Whether in theology, ethics, or ritual, WATER’s efforts are geared to bring together solid intellectual data with the activist and spiritual commitments of our Alliance. In accord with our commitment to anti-racism, we put a priority on learning about and acting to eradicate many related forms of injustice. Colonialism in its many forms is one such issue. We began last month with Marian Ronan’s instructive talk on settler colonialism especially in the US. We continue this month with Sheila Curran to focus on Ireland’s Industrial Schools. I seek your guidance on other related topics and speakers so please send them to me at mhunt@hers.com.

Lest you think our topics obscure, the French government released a long awaited report today on sexual abuse in Catholic institutions in that country. Over the last 70 years, they report over 216,000 cases involving Catholic clergy with the number swelling to 333,000 if lay teachers in Catholic schools and other institutions are included. It is thought to be the largest number of abuse cases reported by any country in the world though I would still bet it is the tip of a larger iceberg. Notable findings include the “systemic character’ of the coverups and the fact that the “’vast majority’ of the victims were pre-adolescent boys from a wide variety of social backgrounds.” https://www.cbsnews.com/news/france-catholic-church-sexual-abuse-minors-inquiry-finds-216000-victims/

Sheila Curran is a member of the Congregation of the Sisters of Mercy, Northern Province, Ireland. She holds a Doctorate of Ministry and a MA in Biblical Studies from Catholic Theological Union, Chicago; an MA in Equality Studies, University College Dublin; and a Degree in Social Work from the University of Ulster, Jordanstown, Belfast. She works with Migrants and Refugees in Dubli while also undertaking theological research and writing on the themes of “Cry of Earth and Cry of the Poor,” particularly from a feminist perspective.

She will look at the Irish industrial schools from pre- and post-independence Ireland.  She will highlight the complicated role of religion, particularly the Catholic Church, and its relationship to the State.  She will lay out the challenges emerging from proper research and the role of advocacy groups in helping and hindering a deeper analysis of the issues. These issues are not easy, but opening such discussion provides insights for people in many countries to understand parallel cases on their own soil. She does not claim to be an expert on these questions but she is a well informed justice-seeker.

We appreciate your work, Sheila, and look forward to learning from and with you on a tough topic. Thank you for your insight and commitment to justice on all fronts. 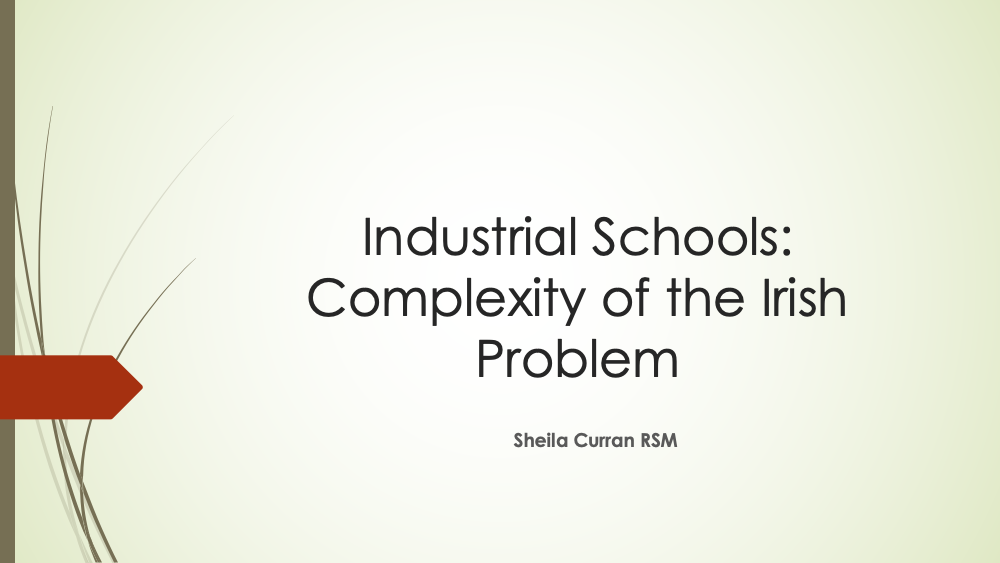 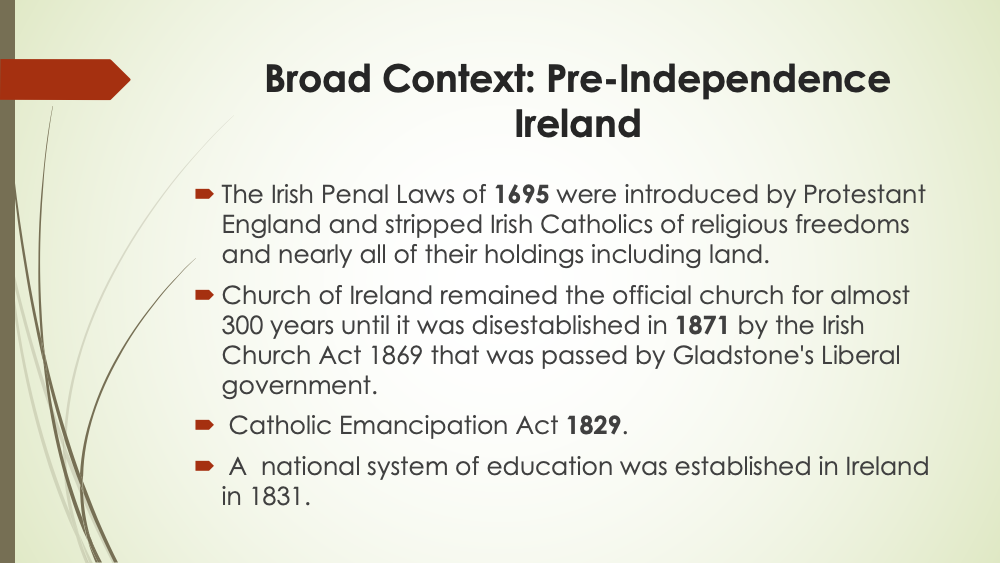 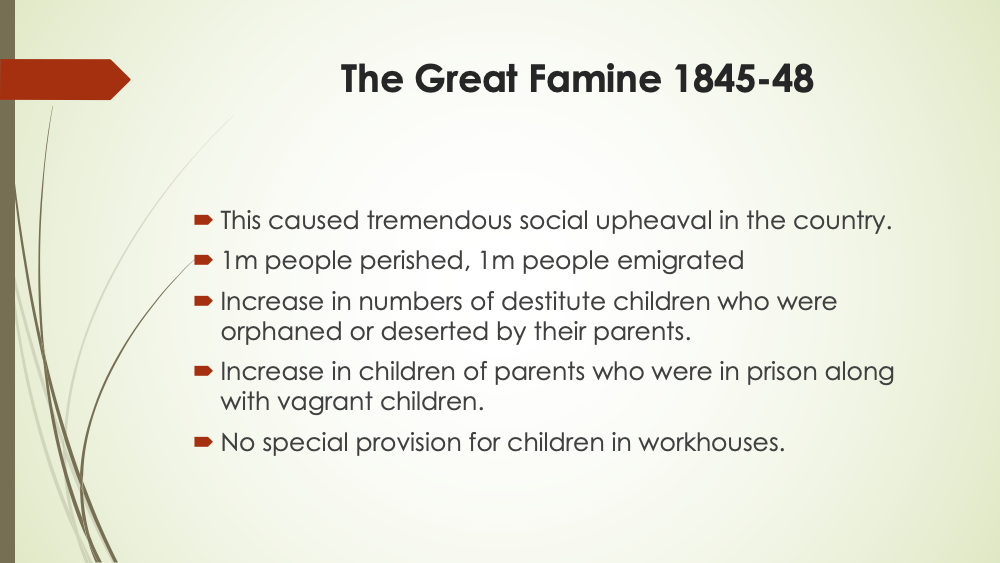 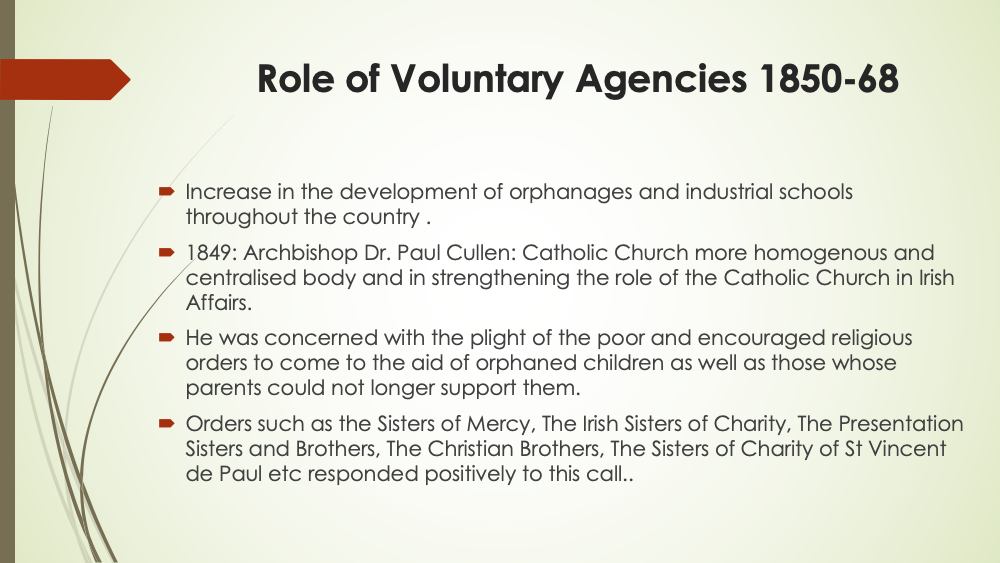 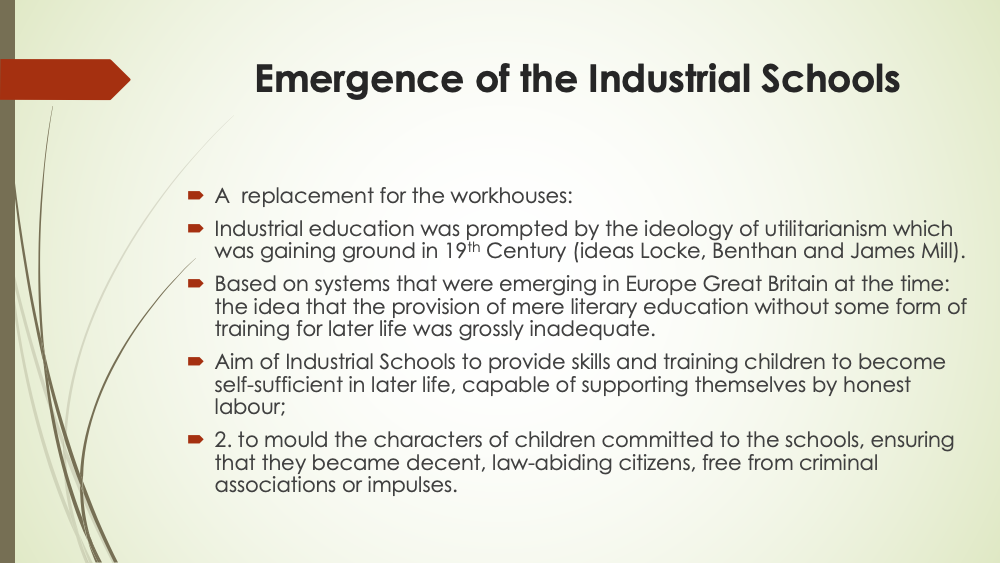 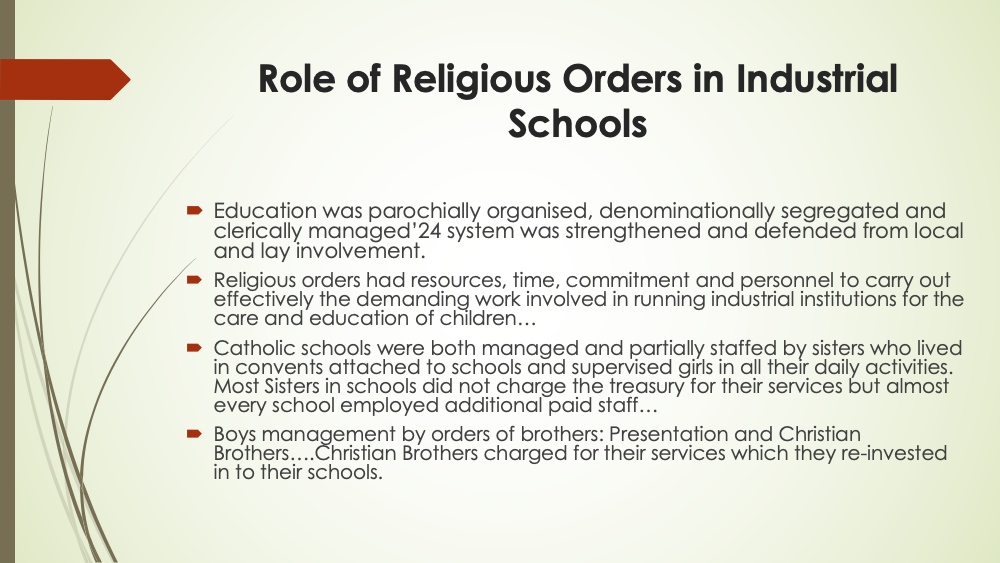 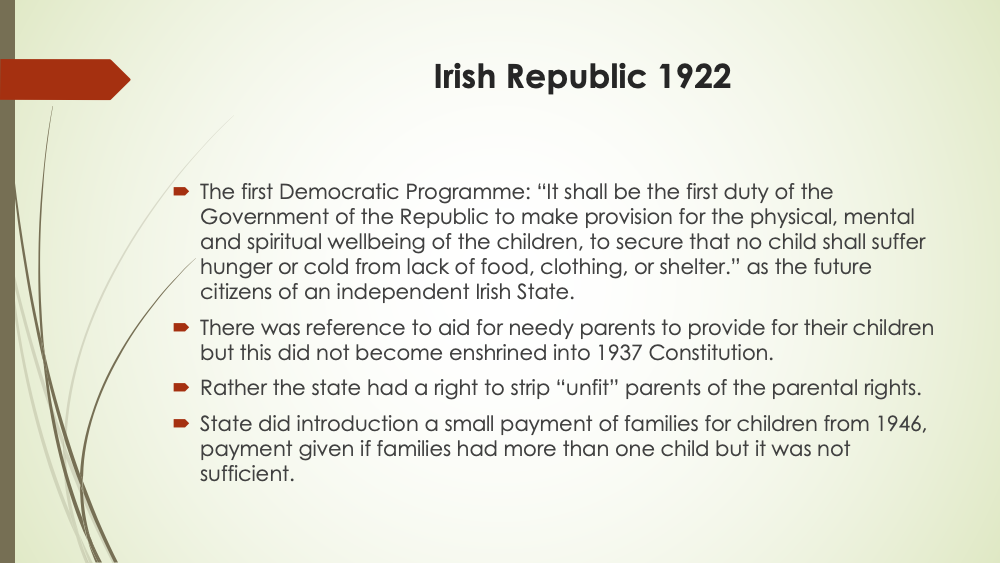 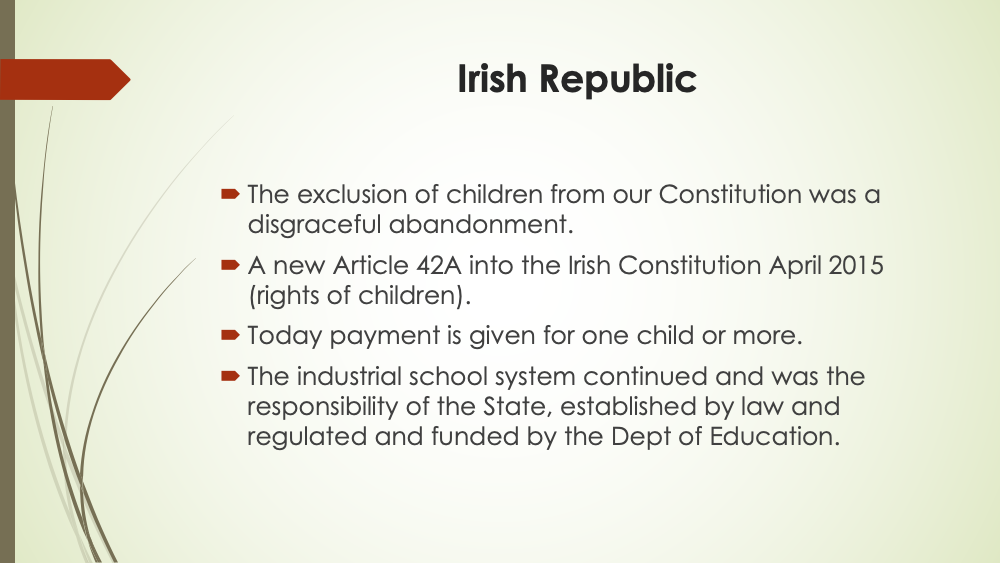 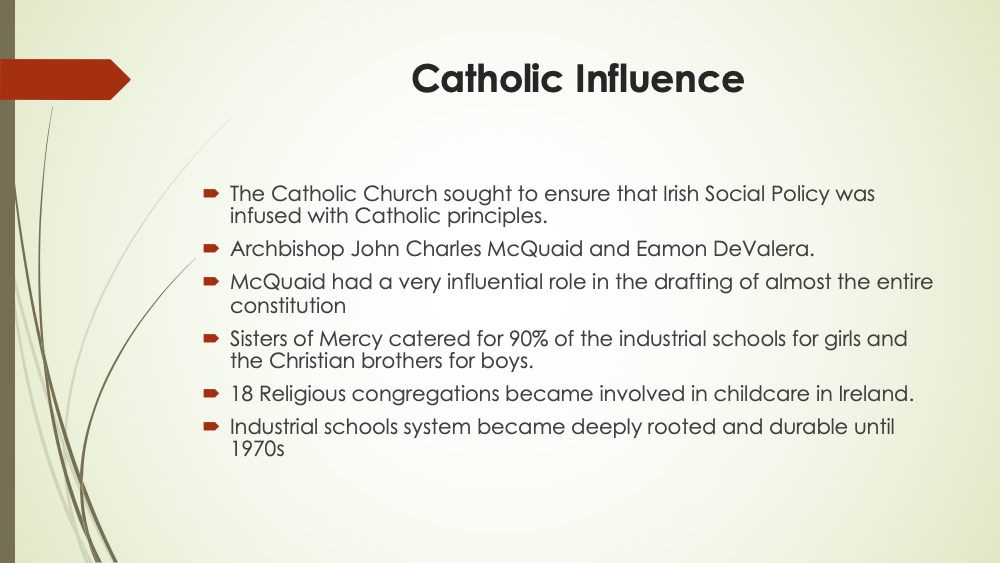 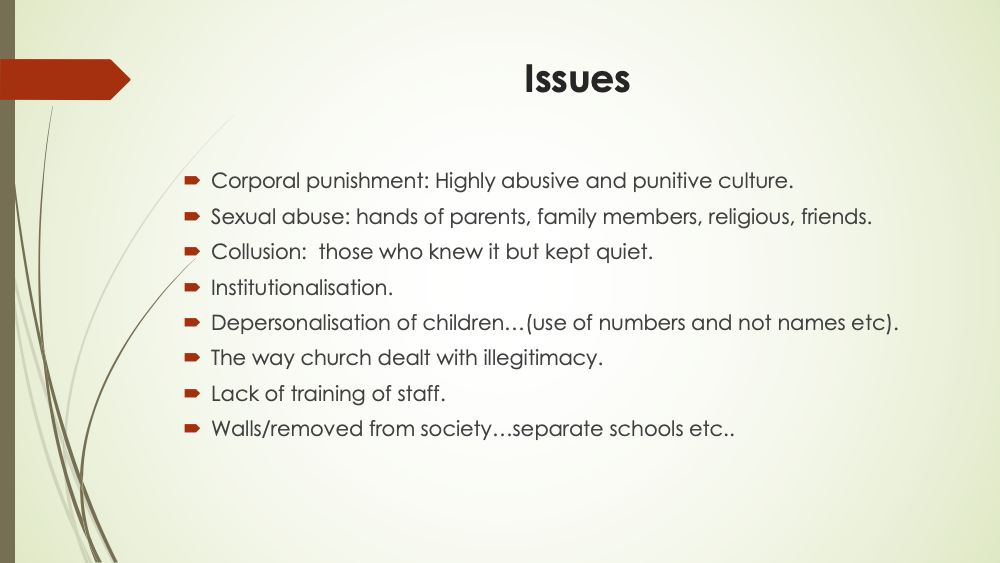 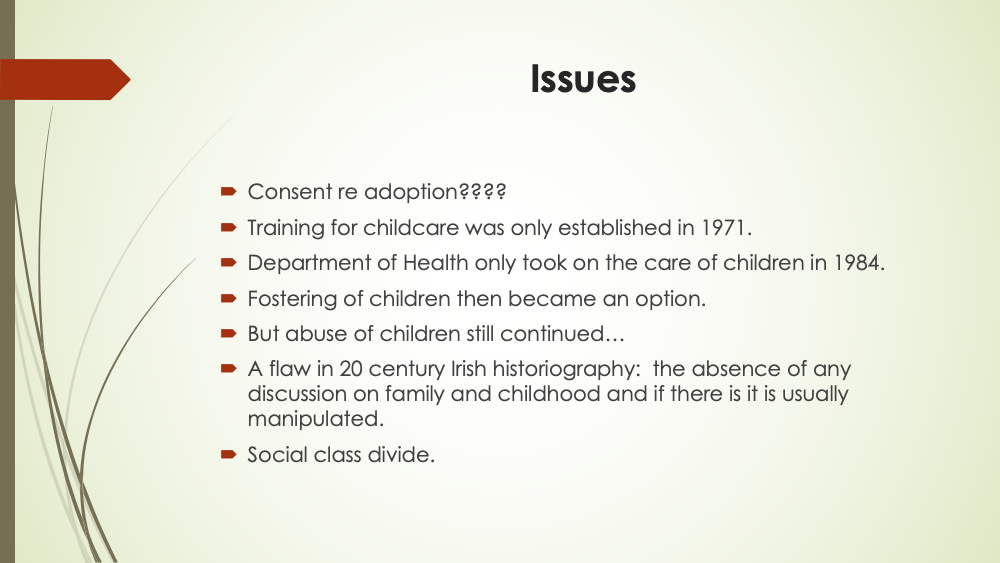 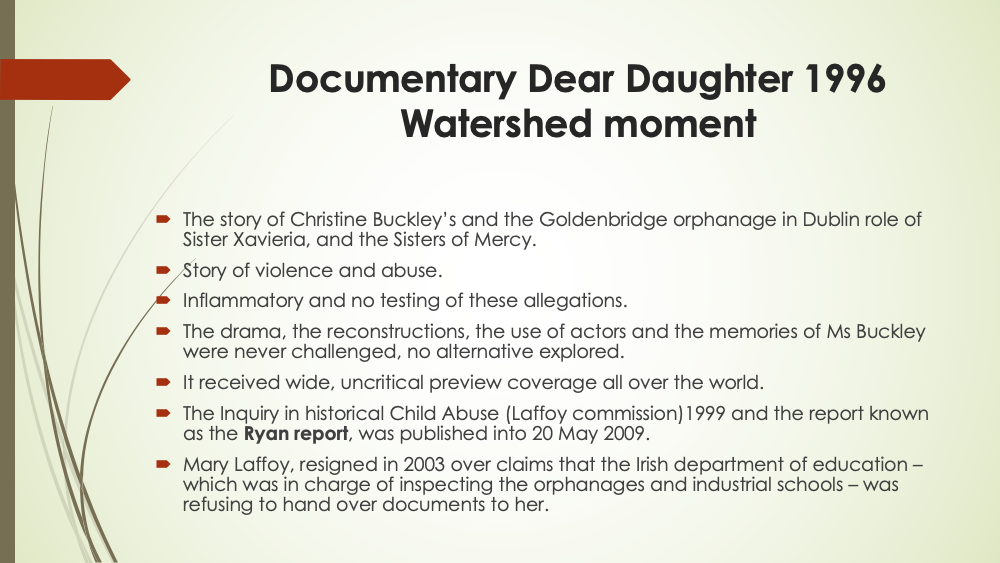 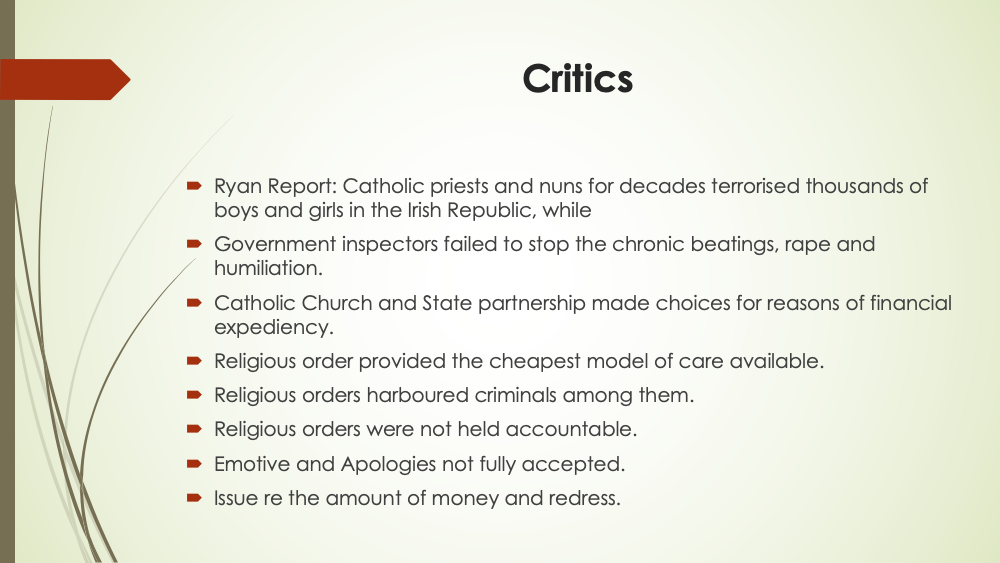 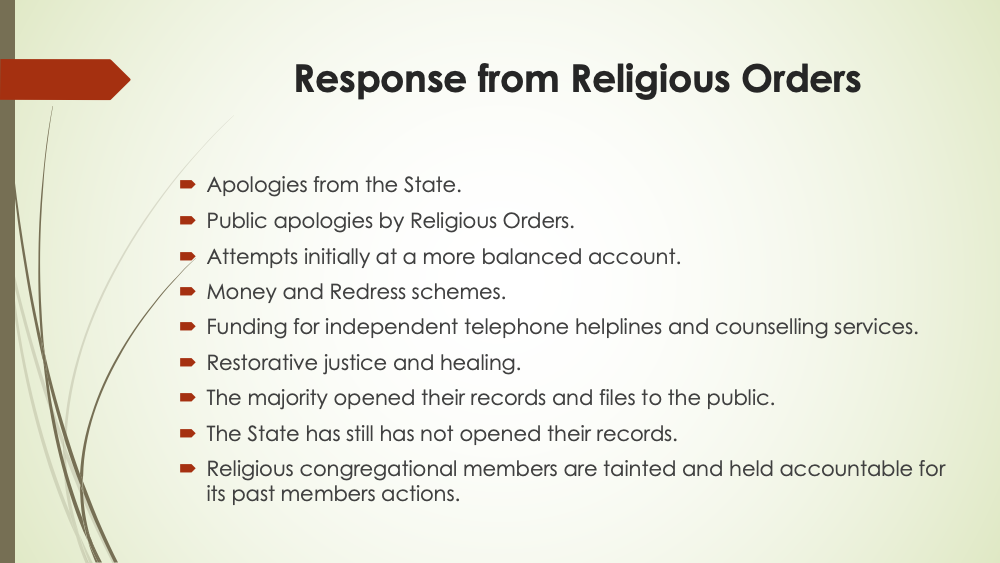 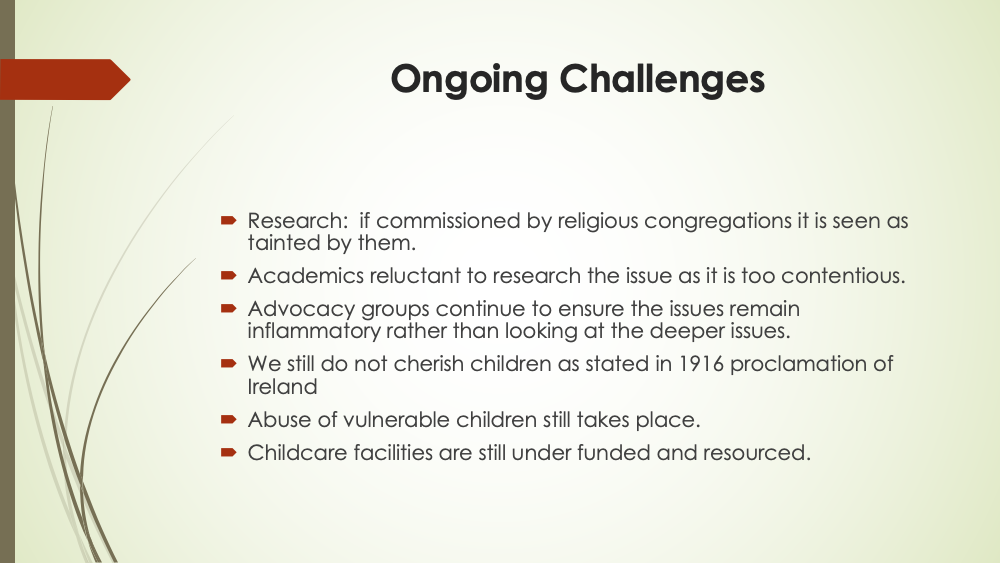 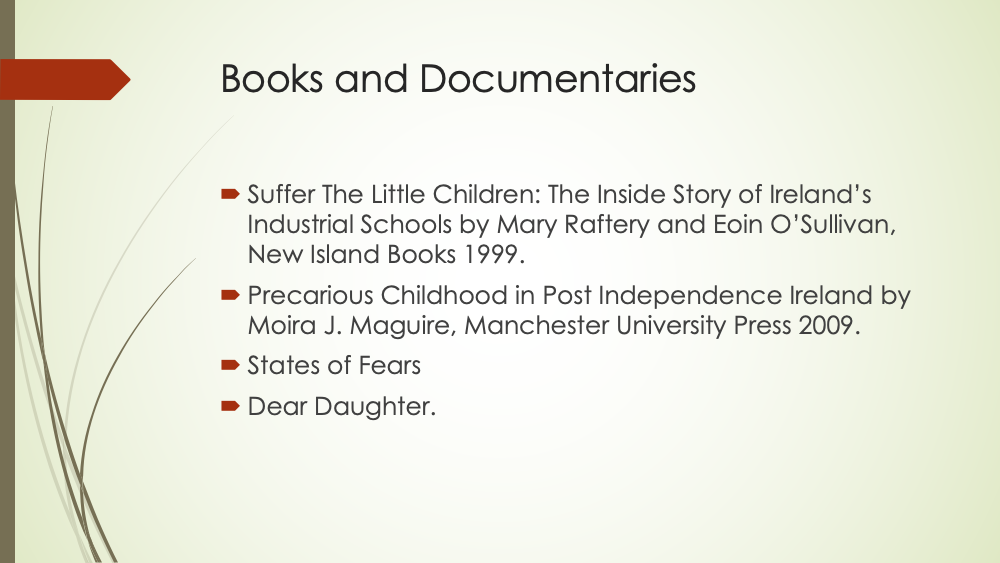 Q: The impact of this problem on the Irish society has been enormous. Why do you think the same isn’t true for similar situations in the United States?

A: For one, there is the separation of church and state. In Ireland, when one is accused, both are accused. This is not the case in the United States. Also, because Ireland had to sacrifice so much for their faith– think in terms of English control of churches– and because the island is so small, there really is a collective understanding of the enormity of the church in our everyday lives. Now of course, demographics are shifting. But at one point approx. ninety percent of the social service provision in Ireland was run by the religious orders and members of the church. That is very different from the US.

Comment: In India, the whole system of the church feels flawed. We were taught of a punishing, stern God, when love should be the core of our faith. The structure– a structure of colonialism, patriarchy, and oppression– keeps everything secret. Nuns helped to play into this hierarchy-based system, as did bishops and other male leaders of the church. This colonially-created system is simply no longer relevant to the reality of the 21st century.

Comment: The Irish layperson (Marie Collins) assigned to the Pope’s Commission for the Protection of Minors resigned over lack of funding for research and advocacy. In response, she was vilified by the Irish government and the Catholic Church. I find that this is why advocates continue to do their work- because they simply must. Journalists and lawyers are also doing excellent and difficult exposure work.

How did we become a people where God’s love, and the universality of that love, became something that was vindictive- where the idea of a God was that of a judge, admonisher, to be feared, not to be loved? How did this oppressive theology take such a firm grip? How did this theology become so prevalent  in Ireland more than anywhere else?

Why did religious institutions become guardians of the Irish State? What happened to the charisms of religious communities who had an option for the poor but ended up running places that kept children in prison-like systems, in their role as guardian of the State?

What are some of the ways in which similar dynamics of the Irish industrial school situation are playing out where you live?

Netflix series: “The Keepers” (available here with a Netflix account)

Article: Reflections on the Ryan Report

October 2021 WATERritual: “Becoming Saints of Love and Justice for All Saints’...
Scroll to top