How do women get the ear of Pope Francis? 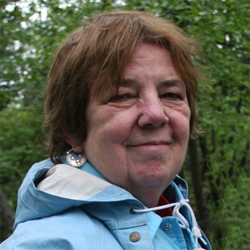 Mary E. Hunt, co-director of WATER and occasional contributor to NCR, hosted a Christmas party in Washington, D.C. My fellow Loretto sister and NCR blogger and radio host Maureen Fiedler was a guest. She and Mary began a playful imagining of routes to reach Pope Francis to offer a perspective on women other than our being a problem that needs a theology. Maureen reported this conversation to me and so I too have been imagining routes to Pope Francis. And I’ve been remembering some of Mary’s work with women theologians.

I suggest that those of us who are concerned about women’s roles in every aspect of the Catholic church make our case to the members of Pope Francis’ Council of Cardinals. Boston Cardinal Sean O’Malley and cardinals from Europe, Africa, Asia, South America and Australia make up the nine members of the council. Part of their job is to carry the concerns and issues of the world to Pope Francis.

Mary thinks about theology with women around the world. WATER’s Feminist Liberation Theology Network  is a touchstone for many such groups. She describes their work with gusto and deep admiration. Here’s my list of some of the organized work she detailed at a Loretto talk I attended:

1. Con-spirando is a Chilean collective of women seeking new insights in the fields of spirituality, ethics, theology, politics, memory, body and daily life.

2. CDD, Catolicas por el Derecho a Decidir, is a remarkable network of women’s groups all over the continent (Uruguay, Argentina, Brazil, Mexico, etc.) that are vital to women’s political and theo-political work. CDD groups are connected variously to the U.S.-based Catholics for Choice.

3. Well-organized efforts in Europe include the collective FAMA in Switzerland, Der Apfel in Austria, and Schlangenbrut in Germany. They each publish excellent magazines in which they showcase the feminist theo-political work of their groups. Also, the European Society of Women in Theological Research, despite its very academic sounding name, includes many colleagues who are very practical and involved in everyday struggles for which feminist theological insights can be helpful.

4. Ireland’s Mary Condren leads the Woman Spirit Ireland – The Institute for Feminism and Religion. This group “aims to explore a prophetic approach to feminism and religion, inclusive of many traditions and emerging consciousness in Ireland. We do this by providing opportunities for women to reclaim religion by engaging theoretically and experientially with the issues or feminist theology, ethics, spirituality and ritual.”

5. The Circle of Concerned African Women Theologians is a vital group. “The Circle is the space for women from Africa to do communal theology. Musa Dube, one of the Circle theologians, asserts that “… a circle of women describes those who are seated together, who are connected and who seek to keep the interconnectedness of life. The Circle members are women who are rooted in Islam, Christianity, Judaism and African Indigenous Religions. They are indigenous African women and also African women of Asiatic and European origins. These concerned women are engaged in theological dialogue of the cultures, religions, sacred writings and oral stories that shape the African context and define the women of this continent. The Circle members attempt to reflect together on justice across boundaries of gender, faith and belief.”

6. All-Africa Conference: Sister to Sister is another dynamic project. “All-Africa Conference: Sister to Sister (AACSS) offers a process to empower African women to more effectively address HIV and AIDS issues and to bring new information and hope to every village and hut in the sub-Sahara.” U.S. ethicist Margaret Farley has been involved in this Sisters of Mercy-initiated program.

Mary adds that she has recently come to know about the efforts of South Korean Catholic women’s groups via Professor Min-Ah Cho of Saint Catherine’s University in St. Paul-Minneapolis, Minn. She reported that Catholic feminists in South Korea are a visible presence for social justice. Finally, in the talk I attended which was at a Loretto Assembly, she cautioned us not to forget women’s groups in the United States who come from abroad and can help us identify what is appropriate and useful for us to do, for example, the Pacific, Asian, and North American Asian Women in Theology and Ministry which is celebrating 30 years of creative work.

In short, there are many women doing the work of theology (which is different than developing a theology of women). Sadly, I suspect the Council of Cardinals is not aware of this work. How do we tell them? How do we broaden their vision? Meanwhile, women’s work continues with style and impact around the world.

WATERtalk: “A Guide for Women in Religion” with Mary E. Hunt, Kecia...

WATERtalk: “Religious Diversity: What’s the Problem?” with...
Scroll to top