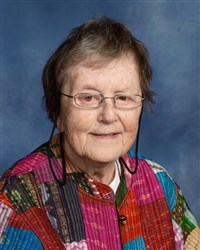 WATER celebrates the unique life of longtime friend and colleague Jeanne Audrey Powers. She is well known for her ecumenical work representing the United Methodist Church. She was a teacher, preacher, writer, campus minister, leader, and mission executive. A leader who pushed the church to be more inclusive, she was one of the first women to be granted full clergy rights in the Methodist Church and the first to be nominated as a bishop, an honor she declined twice.

Jeanne Audrey is also known for her work with the Reconciling Ministries Movement. Coming out during a sermon she gave at their national gathering in 1995, she once again paved the way for others in the church. Named a “Pioneer Woman” by her alma mater, Boston University School of Theology, she will be remembered as just that: a woman who challenged the church to be more inclusive both through her scholarship and personal witness. She will be remembered as a driving force for good. Knowing what it takes to bring about justice, it makes sense that her tombstone reads “subversive to the end.” Jeanne Audrey Powers, rest in eternal justice.