This post was first published on the Feminist Studies in Religion blog.

In December 2014 the leaders of Women’s Alliance for Theology, Ethics, and Ritual (commonly known as WATER) gathered a group of fourteen together at a bucolic Catholic retreat center in Maryland. Our task was to respond to the challenge of “amplifying women’s voices” in the LGBT religious movement. We looked a lot like you might expect: mostly cisgender lesbian with a smattering of genderqueers and others; mostly white with a few people of color; mostly Christian with a smattering of Jews; mostly older with a few young folks. We were a hodgepodge of people, channeling various groups and communities but representing only ourselves. As media specialist Ann Craig, one of the participants, noted, “It was a gift to be in the room.” We are rarely afforded the luxury of two whole (mostly) undistracted days to “think and do.” We “thought and did” in comfortable surroundings, thanks to the hospitality of the Sisters of Bon Secours and the wise design created by our WATER hosts that provided ample time for laughter, reflection, ritual and play. 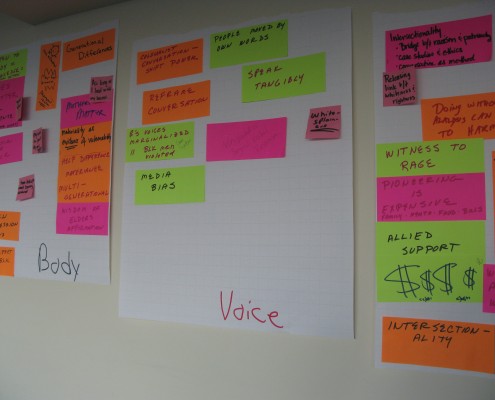 In an age where so many conversations are conducted on email and Facebook and video conferencing, meeting face to face was a welcome opportunity for old-fashioned intimacy, both for renewing old connections and making new ones. We generated ideas for social media creations, writing retreats, networking when the Pope comes to the U.S. next fall, and we sowed seeds for myriad other potential connections. This way of amplifying our voices was only possible in what has come to be known in the LGBT world as a “safe space.” Bishop Yvette Flunder of Oakland, CA affirmed the importance of such a space: “There are so few safe places for the kind of transparent dialogue that flowed from our mouths, hearts, and collective experience. The semi-structured time allowed an organic opportunity for wisdom informed by experience, to surface.”

Seclusion and safety has limits, however. Had we been focused only on those networking possibilities we would have failed to use the opportunity that such a gathering really made possible. It helped us figure out how to use our differences to make a difference—to create not only a safe and hospitable space, but a brave one that allowed us, in the words of scholar participant Robyn Henderson-Espinoza, to “generate new contours of queerness together.” This new queerness generates productive freedom, and according to Craig, “freedom will never again be self-indulgent.”

Sharon Groves then of the Human Rights Campaign described it well:

Intersectionalism is routinely used as short hand to describe what is missing in justice movement work. What the WATER consultation did, however, was to model intersectional justice in practice. The conversations and subsequent actions around the Black Lives Matter movement seeded a robust conversation about what is at stake for those in our communities whose bodies are literally on the line of police brutality and how those of us who operate with race and economic privilege can be better supporters without negating responsibility or blindly reasserting our own privilege.

It was clear to all of us, almost from the moment we gathered, that while we wanted to be responsive to the task at hand, and our networking would amplify our voices in the LGBT religious movement, there was an elephant in the room. We could not work in safety and seclusion on LGBT religious issues alone when the reality of anti-Black police violence was staring us in the face. Mary E. Hunt, one of the WATER organizers, quickly shifted gears, noting that “having a concrete, articulated starting point is key” and that hers, and ours “has changed, grown” beyond the voices of “women.” Participant Marianne Duddy-Burke of DignityUSA remarked that this shift was important for her and for her community:

“Had I not been there, my organization clearly could have missed the opportunity to be part of the “Black LGBT Lives Matter” initiative, which has had a tremendous effect on our largely white, predominantly male constituency already, and which promises to have continued impact. As an advocacy movement based out of worship communities, we were given an opportunity to really examine how a very current issue can be brought into the heart of our work.”

Solidarity work is productive in a variety ways. As Kate Stoltzfus, WATER staff associate and one of the gathering’s youngest attendees, noted, “Our discussion began to outline the start of progress: acknowledging privilege, learning to listen (really listen), seeking both safe and uncomfortable spaces setting clear goals for dismantling the power structures, and finding others with whom to do such work.” Our first act of solidarity was to sign on and send out to our networks a statement that was written, in part, at our retreat by two of the participants. And there will be more to come.

Thelathia “Nikki” Young is Assistant Professor of Women’s and Gender Studies and Religion at Bucknell University. She received her Ph.D. in Christian Social Ethics in 2011 from Emory University. Her research in ethics focuses on race, gender, sexuality, and family. She is currently working on her manuscript, tentatively entitled Indecent Family: Black Queers, Ethics, and Imagination.

Rebecca Alpert is Professor of Religion at Temple University. Her most recent work, Religion and Sports: An Introduction and Case Studies, will be published by Columbia University Press in May.

This post was first published on the Feminist Studies in Religion blog.