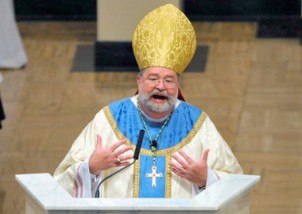 A full-page ad in the New York Times is my idea of making a statement. The Billy Graham Evangelistic Association’s buy on October 28, 2012 is a clean, clear investment in getting their message across. The half-fold portrait of the Rev. Graham, albeit a bit dated, accompanies a strong statement of highlights of the Republican platform, with his signature added for good measure. The message is “Vote for biblical values this November 6.” This is America. You can buy what you can’t win by persuasion.

At a time when literally every vote counts, the United States Conference of Catholic Bishops looks rather cheesy by comparison as they nickel and dime their way to the same goal. A spate of pastoral letters was released just in time for this weekend’s last hurrah in the pulpit before Election Day. The bishops are constrained by law from naming names, yet they do everything but as they seek to bring in an administration that they think will carry their water on health care, especially abortion. Or, maybe it will accord them more respect than they feel they’ve gotten of late when they could not persuade even most of their own people of their conservative views, much less the nation as a whole.

The headline grabber du jour is Bishop Daniel Jenky of Peoria, Illinois, who, as Anthea Butler points out, disses the Affordable Care Act and all who support it. He plays the big faith card: “for those who hope for salvation, no political loyalty can ever take precedence over loyalty to the Lord Jesus Christ and to his Gospel of Life.” This is reminiscent of a recent interview that Archbishop Charles J. Chaput of Philadelphia gave in which he opined, “We’re Catholics before we’re Democrats. We’re Catholics before we’re Republicans. We’re even Catholics before we’re Americans because we know that God has a demand on us prior to any government demand on us… this has been the story of the martyrs through the centuries.” These talking points resound from diocese to diocese. Is anyone listening?

Data from Belden Russonello Strategists (commissioned by the American Civil Liberties Union and Catholics for Choice) indicate that most Americans do not think religious beliefs ought to influence provision of services. On birth control coverage, Catholics weigh in at virtually the same percentage as the nation as a whole against withholding coverage based on religious scruples (68% vs. 69%). Most reason that the benefit belongs to the employee not the employer. Just as no one can tell an employee how to invest a salary or spend a bonus, neither can anyone prevent the use of money for birth control that is mandated by law.

At the heart of the matter, as I read it, are two fundamental issues. The first is that the concept of religious freedom takes on new meaning in an increasingly secular society. This is the bishops’ nightmare, but it is simply a fact that more people are religiously undecided—whether agnostic, atheist, or otherwise uninterested. Secularism is not a threat but a choice. Shifts away from denominational identity, toward so-called “new religious movements” (many of which, like the Mormons, are now mainstream), and the exodus of Catholics from the pews (the second largest denomination in this country is said to be ex-Catholics) have reconfigured the theopolitical landscape. Cries that religious liberty is abridged when formerly entitled institutions cannot impose their will as they’ve become accustomed to are simply ignored, even laughed at. The marketplace is replete with spiritual options, for better or for worse, and none of them has an a priori claim in a democracy.

The second and intimately related reality is that even for those who do remain Catholic, the institutional Roman Catholic Church, the largest single denomination, is losing ground fast. I suspect that these losses will be accelerated by recent pulpit calls for voting Republican. Many Catholics are insulted by the notion that local clergy—not high on most people’s list these days given the priest pedophilia and episcopal cover-up scandals—would dare to dictate how they might vote.

A Catholic woman asked me recently in all seriousness, “Whatever happened to the separation of church and state?” I had to admit that it’s a casualty of the current order. Primacy of conscience, a Catholic staple, seems to have been relegated to the institution’s archives, while to the average Catholic it remains on the front burner. People, not institutions, vote.

Catholics may well decide the election. But I daresay it won’t be because they line up behind the bishops. Religious liberty is simply not for sale even if the currency is threats to eternal salvation.