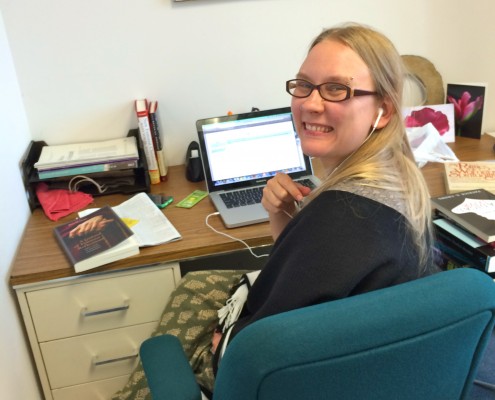 This week the current crop of WATER interns were fortunate to share the office with Michelle Mueller, a doctoral student at the Graduate Theological Union who holds an M.Div from the Pacific School of Religion and a B.A. from Bryn Mawr College. Michelle was also a WATER intern ten years ago, and this visit was both an opportunity for her to reunite with Diann and Mary, and conduct research for her comprehensive exams, and a chance for current interns to learn from her experiences during and after her internship at WATER.

While here, Michelle spoke with us about her research as a scholar-practitioner of Wicca and contemporary Paganism. One of Michelle’s exams is a paper on conflicts between women’s spirituality and trans/genderqueer Paganism in the 21st Century. In it, she evaluates past and present needs for women’s spiritual movements, including trans and genderqueer critiques of Wiccan polarity and heteronormative constructions of gender. Michelle has already received honors for an earlier version of this paper, earning 2nd place in the American Academy of Religion’s Western Region Student Paper Competition of 2014.

Michelle said her highlights this week have been discovering Whipping Girl: A Transsexual Woman on Sexism and the Scapegoating of Femininity by Julie Serano, reading from a favorite author bell hooks’ Outlaw Culture, and of course, talking with interns! After the week with us, Michelle continued her East Coast trip with a memorial for beloved Wiccan High Priestess Judy Harrow in NYC.

Michelle reflected that her internship at WATER was really formative, and to include WATER resources in her doctoral work 10 years later is entirely fitting.

An Intern “Comes Out” for Choice: the Hobby Lobby Ruling

100 Faith Leaders Across the U.S. Say No to Religious Exemption to Discriminate...
Scroll to top