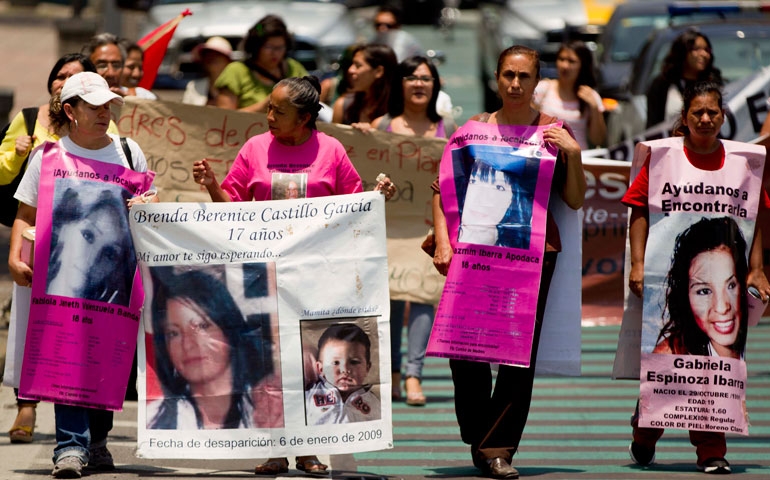 In Mexico City June 18, mothers carry posters of their daughters who disappeared in Ciudad Juárez. The marchers were demanding police investigate the cases of missing women in the border area. (AP Photo/Eduardo Verdugo)

Catholic women theologians work with abundant hope on contested turf. Women, Wisdom, and Witness: Engaging Contexts in Conversation makes clear that they need collegiality to survive. The collection of essays is divided into three sections: “Women’s Experience in Context: Suffering and Resistance”; “Women’s Wisdom in Context: Academic and Higher Education”; and “Women’s Witness in Context: Religion and Public Life.” Work of this scope does not mask the fact that there are still too few women teaching in Catholic higher education, especially at the graduate level, to make much structural difference. Still, editors Rosemary Carbine and Kathleen Dolphin have done a service to the field by publishing a volume that demonstrates the skills and commitment of more than a dozen women writers/teachers.

The essays were part of the New Voices Seminar, an annual meeting held in conjunction with the Madeleva Lecture at St. Mary’s College in Notre Dame, Ind. More than 50 young women have participated in that experience, which combines critical theological reflection with personal support. They practice the art of engaged conversation, learning to listen and learning to expect to be listened to as well.

This dynamic is reflected in a unique feature of this collection, namely, transcripts of telephone conversations among the authors that add depth to their chapters. They model how feminists are attempting to transform the ways in which we work as well as the work itself. The appended conversations help to make academic writing accessible for a broad audience. These sections make the book welcoming for students and other informed, but not necessarily expert, readers.

A chapter from each successive section shows just how effective this method can be. Nancy Pineda-Madrid offers the painful, powerful story of “Feminicide and the Reinvention of Religious Practices” in the essays on experience. She details the killing of women in Ciudad Juárez, Mexico, and other places, murders that their perpetrators carry out with impunity because women’s lives are seemingly expendable.

Pineda-Madrid’s theo-ethical perceptions of the crucifixion of women merit serious consideration and imaginative expressions of faith. She opens up conversation about the need to lament as part of doing justice. One can hear in her colleagues’ responses the deep chord of recognition of women’s suffering. There is an urgency to bring that experience into the classroom as part of feminist pedagogy.

LaReine-Marie Mosely’s chapter in the second section on wisdom, “The Conundrums of Newer Catholic Women Theologians,” raises equally challenging issues related to the kyriarchal Roman Catholic church. She names the problems of clericalism and chauvinism that underlie some priests’ sexual abuse of children and some bishops’ cover-up of those illegal actions. This is welcome work to address a monumental problem.

In the conversation section she lays out related issues. She names the racism that prevented bishops from addressing that social evil in effective and timely ways. She brings homophobia and colonialism into the mix, urging her colleagues to listen in proactive ways. Catholic theology needs more such interlocking analysis.

In the third section on witness, Rachel A.R. Bundang reflects on “Bridget Jones, Cancer Patient: On Navigating the Health Care System as a Singleton.” Hopefully, the new health care laws will remedy some of the unfair complexities. But society at large and Catholic circles in particular build structures and encourage mores based on the normativity of couples, not the reality of single people, unfairly privileging the former and oppressing the latter.

Marriage and motherhood for women are so deeply ingrained in our national and Catholic psyches that many do not recognize the inherent worth and value of a person qua person. When it is a person, not a couple, that gets sick, needs care, or otherwise acts like a human being, that person can be rendered invisible. Most institutional Catholic theology has only exacerbated the problem with emphasis on narrowly constructed views of family and an also-ran attitude toward those who live alone.

Lurking beneath the surface of many of these essays was much bolder, more constructive, more creative work of which these and other Catholic women theologians are capable if they move beyond institutional boundaries. I looked for signs that they were talking with colleagues far from their Catholic campuses. I wanted to see how they were shaping their theological priorities and lifting their theological voices without regard for consequences in kyriarchal Catholic academia. I hoped that they would cast off fear that they might lose their licenses to teach (the dreaded mandatum). Alas, in many cases, I was left wanting.

Yet each of the chapters in this well-written and keenly edited collection deserves and invites further conversation. They form a new theological agenda for new voices to take on. I sincerely hope they will, and by doing so encourage others to go even further in developing feminist Catholic theologies that sparkle and glisten with spirited insight.

In Memory of Her
Scroll to top