Reclaiming Our Voices in an Age of Violence 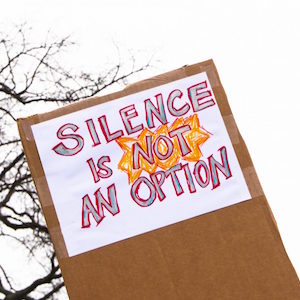 Put #MeToo posters around the room. Gather rosemary sprigs and a bowl of water. Place as many lit candles as you wish on your altar.

We gather tonight during National Bullying Prevention Month and Domestic Violence Awareness Month and in the midst of #MeToo movement to raise up women worldwide who resist bullying, abusive rhetoric, harassment, and violence present in our societies today.

In this WATERritual, “Reclaiming Our Voices in the Age of Violence,” we will challenge one another to speak out because only together can we create a world free from violence and fear. We will mourn those who have died because of domestic violence. We will honor those who have survived and are breaking silence to tell their stories, and we will pray for healing.

Say your name, where you are geographically, and speak a word of healing.

Will you be my refuge
My haven in the storm,
Will you keep the embers warm
When my fire’s all but gone?
Will you remember
And bring me sprigs of rosemary,
Be my sanctuary
‘Til I can carry on
Carry on.
Carry on.

This one knocked me to the ground.
This one dropped me to my knees.
I should have seen it comin’
But it surprised me.

In a state of true believers,
On streets called us and them,
It’s gonna take some time
‘Til the world feels safe again.

You can rest here in Brown Chapel,
Or with a circle of friends,
A quiet grove of trees
Or between two bookends.

Readers put rosemary into bowl of water after each.

From CNN, “An activist, a little girl and the heartbreaking origin of ‘Me Too’” October 2017

Tarana Burke, program director for Brooklyn-based Girls for Gender Equity, was a youth camp director when a young girl asked to speak to her privately.

“For the next several minutes this child … struggled to tell me about her ‘stepdaddy’ or rather her mother’s boyfriend who was doing all sorts of monstrous things to her developing body. … I was horrified by her words, the emotions welling inside of me ran the gamut, and I listened until I literally could not take it anymore … which turned out to be less than five minutes. Then, right in the middle of her sharing her pain with me, I cut her off and immediately directed her to another female counselor who could ‘help her better.’”

Burke said she never forgot the look on the girl’s face.

“The shock of being rejected, the pain of opening a wound only to have it abruptly forced closed again — it was all on her face,” she wrote.

“I couldn’t help her release her shame, or impress upon her that nothing that happened to her was her fault. I could not find the strength to say out loud the words that were ringing in my head over and over again as she tried to tell me what she had endured. …

“I watched her walk away from me as she tried to recapture her secrets and tuck them back into their hiding place. I watched her put her mask back on and go back into the world like she was all alone and I couldn’t even bring myself to whisper … me too.”

That was the genesis of the movement — to help young women of color who had survived sexual abuse, assault and exploitation.

“On one side, it’s a bold declarative statement that ‘I’m not ashamed’ and ‘I’m not alone.’ On the other side, it’s a statement from survivor to survivor that says ‘I see you, I hear you, I understand you and I’m here for you or I get it.”

Phu Nguyen, Freelance Writer
From Huffington Post, “#MeToo Has Made Me Speak Up”
“I speak up today to stand with all women who have been sexually harassed, abused, exploited, and denigrated. I speak up to stand with all the women who are part of the #MeToo movement right now and always, who will no longer accept silence as the norm. I speak up for the women who don’t have the privilege of a platform, like I do. I speak up for the men who want to be allies but who have been complicit in the silent assaults and harassment of girls and women. It’s time for you to speak up with us, too. It’s time for you to condemn the inappropriate, inexcusable, non-consensual sexual acts of abuse committed by your fellow men. It’s time to start believing women when they speak up.”

Katharine Viles
From, The Washington Post, “I’m a sexual assault survivor. #MeToo is incredibly isolating”
“Plenty of people talk about how brave it is to speak out, and they’re right. It is brave to speak out, but that doesn’t make you a coward if you don’t. Silent or not, activist or not, we are worthy, and we will be just as worthy when #MeToo stops trending. I don’t owe anyone my story, and neither do you.

Hillary Clinton
From Rookie, “Ask Hillary Clinton” – November 2016
“Believe me, every strong woman you admire who has worked to make our world a fairer place has faced opposition along the way. It’s usually a sign that you’re doing something right. But — and this is a big but — when that disagreement crosses over into bullying or harassment, it’s never OK. If it makes you feel scared or uncomfortable or unsafe, I hope you’ll consider telling them directly to stop or asking someone you trust to step in. You should be able to go to school or use the internet or just live your life without fear of being bullied … Don’t let the haters get you down.”

From, UN Women, “It is time for action to end violence against women” June 2013

“It is time for action when up to 70 per cent of women in some countries face physical and/or sexual violence in their lifetime. When one in three girls in developing countries is likely to be married as a child bride; when some 140 million girls and women have suffered female genital mutilation; when millions of women and girls are trafficked in modern-day slavery; and when women’s bodies are a battleground and rape is used as a tactic of war – it is time for action.”

What were your thoughts as you listened to the words of these women? How will you reclaim your voice in this age of violence? (Sharing)

We trust beyond the absence: there is a presence.

That beyond the pain: there can be healing.

That beyond the brokenness: there can be wholeness.

That beyond the anger: there may be peace.

That beyond the hurting: there may be forgiveness.

That beyond the silence: there may be the word.

That through the word: there may be understanding

That through understanding: there is love.

Blessing of Our Voices

Let us bless our voices and reclaim our power.

Touch your Ears saying: Bless my ears that I may hear the stories of women.

Touch your Diaphragm saying: Bless my diaphragm that my breath may sustain me.

Touch your Nose saying: Bless my nose that I may smell the scent of hope.

Touch your Lungs saying: Bless my lungs that I may fill my body with courage.

Touch your Mouth saying: Bless my Mouth that I may cry out for justice.

Let us go forth refreshed, healed and empowered by this water and the rosemary

To speak out with love and boldness and break the silence

As we we unite our voices and strength, may the God of love, peace and justice heal our hurt and help us work for a better world, free from fear and violence. Amen. Blessed be. May it be.

Adapted from and sung to the tune of Guide My Feet, African American Spiritual

Greet one another with a word of hope.

This web site lifts up National and International interfaith leaders with decades of effective and powerful experience in providing tools for effective prevention and response to intimate violence within their own communities.

NCADV is the voices of victims and survivors. We are the catalyst for changing society to have zero tolerance for domestic violence. We do this by affecting public policy, increasing understanding of the impact of domestic violence, and providing programs and education that drive that change.

RAINN (Rape, Abuse and Incest National Network) is the nation’s largest anti-sexual violence organization. RAINN created and operates the DoD Safe Helpline for the Department of Defense. In 2015, the Online Hotline expanded to offer services in Spanish at rain.org/es. RAINN also carries out programs to prevent sexual violence, help victims and ensure that rapists are brought to justice.

Faith Trust Institute provides faith communities and advocates with the tools and knowledge they need to address the faith and cultural issues to abuse. (Includes sermon samples for preaching on sexual assault and abuse).

Our Stories Untold was created as an open space to discuss sexualized violence within Spiritual communities (more specially, the Mennonites Church, through all stories from the all walks of life are welcome. Through a blog, it has evolved into a community for all those who are and have been affected by abuse in their lives.

Almost half (47.5%) of American Indian/Alaska Native women, 45.1% of non-Hispanic Black women, 37.3% of non-Hispanic White women, 34.4% of Hispanic women, and 18.3% of Asian-Pacific Islander women experience contact sexual violence, physical violence, and/or stalking by an intimate partner in their lifetime (CDC, 2017)