“The Pornography of Meat: The Misogyny We Don’t Want to See”

Good afternoon. Welcome to all of you and a special welcome to our guest Carol J. Adams who will speak today about “The Pornography of Meat: The Misogyny We Don’t Want to See.” Carol, I’m only sorry you are not here in person.

Like all of WATER’s efforts, this WATERtalk is not simply an academic seminar. It is a way to learn in order to bring what we learn to the creation of a more just and equitable world. By studying Carol’s work, we take another step toward deepening our understanding of the relationship between humans and animals, and the ways in which exploitation and injustice continue to flourish despite our best efforts. This is not an easy topic, but it is one that Carol has been working on for decades with global reach and ever-deepening intersectional analysis.

Carol Adams is a valued friend and colleague over nearly five decades since we were at Yale Divinity School and Harvard Divinity School respectively in our youth at a high point of early feminist work in religion. Her work then—from early articles on feminism and vegetarianism to her creative tour of the graves of great women at Mt. Auburn Cemetery–was hints and glimpses of the enormous and influential body of work that she continues to produce year after year, article, theme, and blog after monograph, recipes, and edited collections.

Carol J. Adams is a unique feminist scholar and activist whose work she says “explores the cultural construction of overlapping and interconnected oppressions, as well as the ethics of care.” Her debut book, The Sexual Politics of Meat, celebrated its 30th anniversary in 2020 while a new and updated version of The Pornography of Meat (Bloomsbury Academic) originally published in 2004.

Here is what we at WATER said about it:

“The original edition caused a stir, and this one is sure to generate brave conversations about the reality of sexism and meat. The images are many and relentless. They make the case that the text spells out: ‘the pornography of meat exploits the asymmetrical relationship of gender to normalize animal oppression, simultaneously naturalizing the gender binary and a consumer vision in which farmed animals are imputed to desire their own death and consumption’ (p. 17). Read and heed.”

The book’s promotion reads, “The visual accompaniment and sequel to The Sexual Politics of Meat, it includes 340 images sent from around the world by Adams’s readers, whom she calls ‘grassroots sociologists.’” I can attest that it is a hard read, a book that sears into memory and imagination the images we are bombarded with daily but simply, like the proverbial fish in water, miss.

Her slideshows, long before we dreamed of sharing our screens on Zoom, have mesmerized audiences. Carol is, if I may use the term, “a rock star” especially among young people who see in her work the intersectionality that they seek to analyze and live with integrity.

Carol has written on many topics, including anti-violence, Jane Austen, not to mention Frankenstein. She is also the author of Burger, in Bloomsbury’s Object Lessons Series, and co-author with Virginia Messina of Protest Kitchen: Fight Injustice, Save the Planet, and Fuel Your Resistance One Meal at a Time, and of many other books including Living Among Meat Eaters: The Vegetarians’ Survival Handbook.

Her articles have appeared in the New York Times, the Washington Post, Ms. Magazine, The Christian Century, Tikkun, and Truthdig, among others. She is working on a memoir of her mother based on her essay from the New York Times, “Finding Myself in My Mother’s Calendars” which is something to anticipate.

Such a quasi-clinical introduction of Carol Adams misses so much—her astonishing intellect, her photographic memory, her endless commitments to people, animals, and the planet that began in Forestville, New York where she grew up. Early work on violence against women and constant concern for animal rights beginning with her childhood pony Jimmy run through to the present when she took vegan food to people in voting lines in Texas where she lives with her partner, Bruce Buchanan. No one was surprised by her generous choice to have her recent 70th birthday party be a benefit for an LGBTQIA-run animal sanctuary named VINE in Vermont which will now build a barn that will be named in her honor.

I would be remiss to leave out her cooking prowess, her delight in her adult sons, now also in her daughter-in-law and a little feminist granddaughter. The list is endless, but right at the top, as I have learned, is Carol’s deep faithfulness to her friends through thick and thin. The Rev. Dr. Marie Fortune, founding director of the FaithTrust Institute which seeks to eradicate sexual and domestic violence, and I are the happy friends to whom the volume we will discuss today is dedicated for “forty-five plus years of action, engagement, and remembering.” Ours is the only non-pornographic picture in the book! Thanks, Carol, and a huge welcome.

First book, The Sexual Politics of Meat, was published 31 years ago 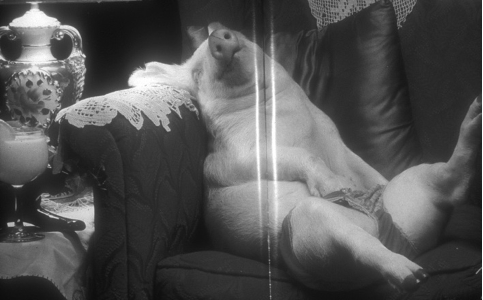 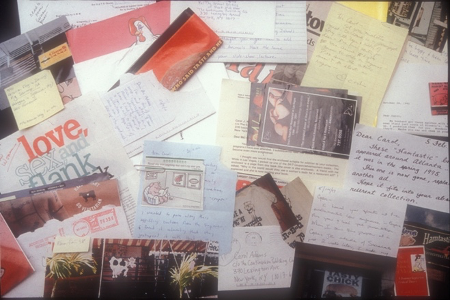 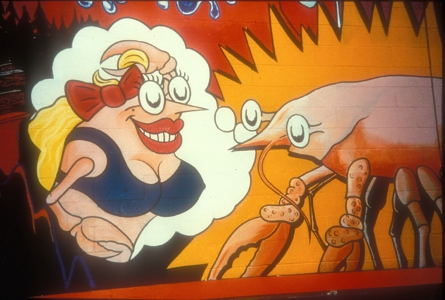 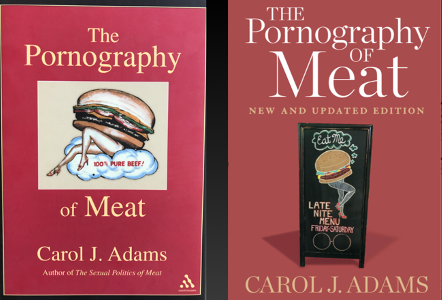 Neither Man nor Beast: my second book explored issues around feminism and the defense of animals

The slideshow then became a book in 2004, the first version of The Pornography of Meat 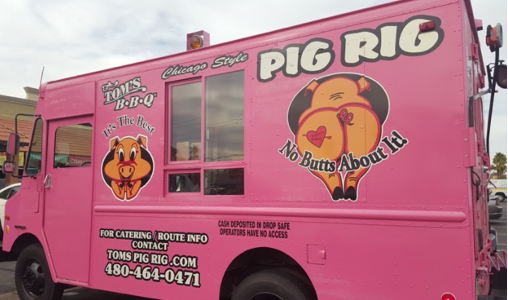 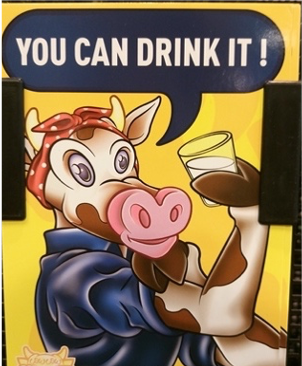 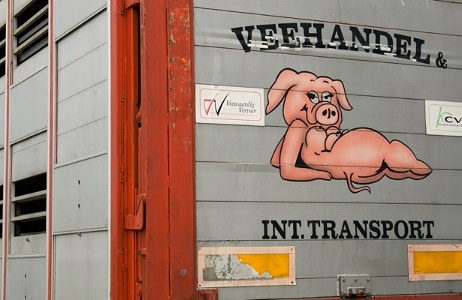 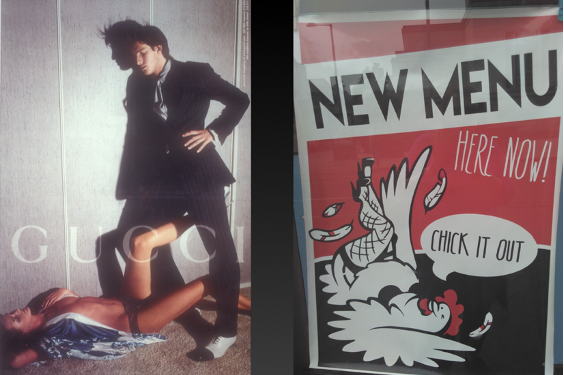 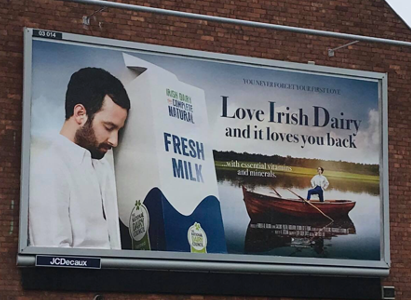 The intersection of race, gender, species is always happening 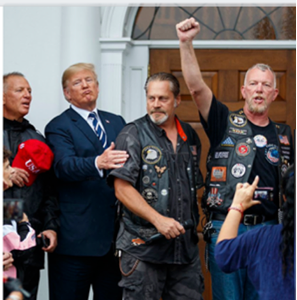 Through the sexual politics of meat and the pornography of meat, you are committing discursive violence which allows for a material form of violence 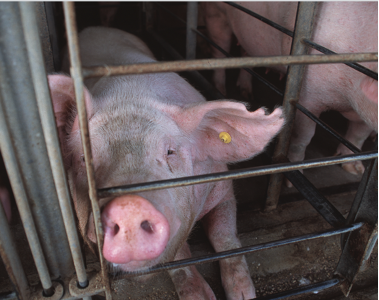 Question: What movement has happened over the last forty years in terms of progress and regression of vegan/vegetarian causes/consumption?

Comment: This makes it clear that it’s not incidental that leading activists and speakers for veganism are women

Question: Is there a banning of your books in schools? Waiting for TX legislature to ban it.

Question: Image of Ursula Hamdress looks like someone leaning back in ecstasy after producing a clitoral masturbatory orgasm

Question: There are criticisms of vegetarianism and veganism being anti-Indigenous/a specific kind of “white veganism,” and advocating instead for regenerative farming. What are your thoughts on these critiques? 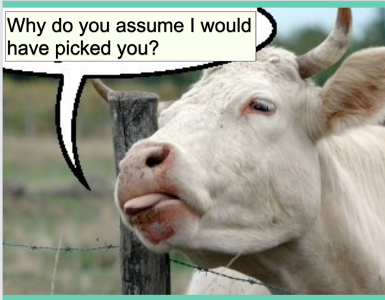 Questions: When you think about violence against women and children, indeed violence against people of color and those who are immigrants, are there new images that you see emerging for your study? I remember some of the early whiskey ads and the woman’s body carved up like meat, but are there new ones that the detention camps at the border conjure up? The crates and pens for children rather than animals are not an exaggeration.

I was thinking of the animal sanctuary you and Marie and I visited outside of San Antonio a few years ago which felt to me like the asylums for those with mental health issues and then I thought about immigrant children separated from their parents who will need help all of their lives to get over such trauma. Any thoughts?

Comment: Now I’ll never be able to not see this kind of advertising, seeing it everywhere

Question: I was struck many times in your book, and in the short video that you shared, by how creative people are, how clever if pernicious, how unapologetically racist and sexist they are. I know people like that. It indicates that they give a lot of thought to these things as we do. Is there a way to infiltrate that advertising so as to begin to build alliances and get people involved who are against the continual use of these images?

Comment: Huge fan of Law & Order: SVU since Marisa Hargitay has her own foundation supporting women victims of domestic violence, using money from the show to fund it

Questions: I found the onslaught of images in The Pornography of Meat relentless. What is the trade-off between people becoming inured to it all after a while and pointing out the obvious for those with eyes to see? I know what and why you do what you do, but I had the feeling several times that I wanted it over. I concluded that the only way it will end is if I help to end it so you made your point. It is sort of like people coming out and being told they flaunt their sexuality when it is simply being honest; then the domestication of being gay into monogamous marriages contains it. Is there a parallel here with meat? Seems these huge pernicious, noxious powers always find a way to best us.

Many thanks to Carol Adams for conversation on The Pornography of Meat. Thanks all for joining. We wish you safe and healthy days ahead and good vegan cooking.

Examples of the sexual politics of meat: https://caroljadams.com/examples-of-spom

Readings/authors referred to by Carol Adams:

In Memory of Her: Sally Miller Gearhart
Scroll to top