Listen to the audio of our June 2017 WATERritual here.

Naming the Circle
Welcome to tonight’s celebration of the Summer Solstice, June 21, the time of greatest light. The heat of the day is a reminder that summer is around the corner. Give yourself a moment to transition into summer. (Pause)
“To many Druids it is the turning seasons and the cycle of life, death and rebirth – reflected in the Wheel of the Year in its completeness – which are significant.”
To create our circle, speak your name, say where you are geographically, and say, “I honor the sun and you on this day.” (Sharing)

The Summer solstice, also known as Midsummer’s Night, is the longest day and the shortest night of the year. On this night, Earth reaches midpoint on her journey around the sun. In the Northern Hemisphere, we anticipate the coming of summer, as our sisters in the Southern Hemisphere prepare for the winter season.

Red, yellow, and orange are the colors for summer solstice: the red of passion, the yellow of the sun, and the orange of the summer bonfire. Red and orange flowers and candles enhance our celebration. This evening may our wishes be fulfilled!

In ancient agricultural rites, fires were lit at summer solstice to renew the sun’s energy. Indigenous Europeans built sun shrines: Stonehenge, Casa Grande, Woodhenge, and New Grange. The Aztecs, Mayans, and Incas of the Americas, the Chinese, and the Egyptians all built sun shrines. In many of the Native American traditions, this time of year is celebrated as part of a vision cycle, and dances are performed to renew the energy of the sun, the vegetation, and the people. On this day, the Hopi Indians of the Southwest celebrate Niman Kachina when the kachinas, the tribal spirit guides, return to their underground homes until the winter solstice.

In Brazil, people set flower wreaths on fire and float them on the waves to honor the Yoruba sea goddess, Iemanjá. In the Christian tradition, summer solstice, or St. John’s Eve, marks the birth of John the Baptist, who told of the coming of Christ, the Light. Even today, St. John’s fires are lit in the mountains in Europe. The flames of sun and fire remind us of the early Christian community’s Pentecost experience of empowerment by the Spirit. In the goddess tradition, summer solstice was known as Litha, the name of a northern European and North African goddess of fertility, power, and abundance.

In feminist circles around the world, the Summer Solstice is being welcomed as a time to renew passions, continue resistance, give thanks for the abundant gifts of Earth, and promise to protect all things under the sun.

Generation to generation people honor the light and call forth injustices in the world. This evening we spark five fires to welcome compassion, resistance, and justice into spaces that are both dry and barren, bountiful and fertile.

We greet the fire of the North to honor those who bring the enduring spark of the Summer Solstice in a time of historic darkness: immigrants, Muslims, Jews, communities of color, sexual and gender minorities, all of us gathered tonight.

We greet the fire of the South to remember those in South America, Africa, and Australia as they celebrate the Winter Solstice.

We greet the fire of the East in solidarity with those in Asia and the Middle East, especially mothers and children in Syria, Yemen, Afghanistan, and Iraq who are in fear and trembling, dying in the streets.

We greet the fire of the West for the indigenous women who fight for their sacred spaces and the right for their voices to be heard. We light this candle to thank our sisters and brothers on the front lines of climate change who have shown grace, courage, and resiliency in the face of destructive environmental policies of the current administration.

We greet the fire of the Center with gratitude for those this season who bring us laughter, uplift our spirits, and warm our souls. We invite you to name them. (Name) 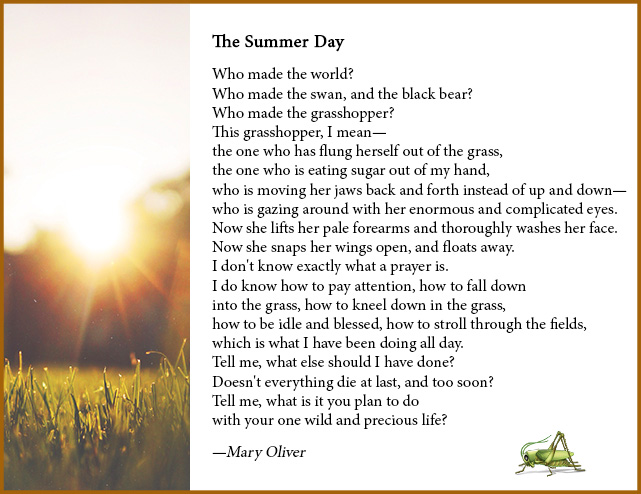 And I suggest this is the best part of your life

“This is the best part of your life,” sings Susan Werner. And Mary Oliver asks,“Tell me, what is it you plan to do with your one wild and precious life?” Where does your spark come from? What fulfillment, passion, and creativity do you wish for yourself and for Earth this solstice? (Pause) Share a glimpse and, if you choose, speak your wish and light a candle to carry your wish home to the universe. Or, if you prefer, just light a candle. (Sharing)

Remembering Those Who Need Healing

On this Solstice night, we call forth the summer Solstice fires once again to honor and remember those who need healing.

Let us remember those suffering from violence around the world:

Let us lift up those affected by the destructive capabilities of sun and fire:

And for anyone else who is in need of healing… (Add your own.)

Spark of the summer solstice fires,

Give us the courage to act for justice.

Give us the wisdom to work together–East to West, North to South–in our common struggle for liberation.

Give us the compassion to care for all of Earth’s goodness on this Solstice night.

Together, we say: Blessed are you, Holy Ones of the Summer Solstice, for giving us this food and drink to deepen our passions, fulfill our wishes, and sustain our fires.

Summer reminds us of lemonade, melons, bonfires, toasting marshmallows, and eating s’mores. Come, let us drink lemonade, eat melon and toast a marshmallow, put it on a graham cracker with a piece of chocolate, and make a delicious sandwich like girl scouts do. (Eating)

Sending Forth and Greeting

We came together today to honor the Sun, the Earth, and each other. Let’s greet each other again by saying and gesturing with raised open arms “I honor the Sun and you on this day.”

To bring closure to our Solstice celebration let’s take the solstice leap. It is traditional on the Summer Solstice to leap over fire. Those who wish can leap over the candles.

Take another leap for the protection of all things under the Sun and on the Earth. (Leap over the fire)

Let us go forth mindful of the life-giving power of the Sun,
Conscious of the power of our collective spirit,
And aware of the work still to be done on this Earth.