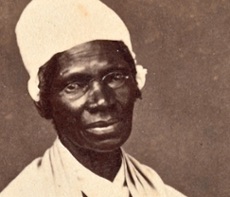 We continue our monthly ritual series to raise up wise women by reflecting on Sojourner Truth. She was a Spirit-led activist for abolition, women’s rights, and non-violence, and she continues to inspire us today. Share with a close-knit or newly formed group. Or enjoy on your own.

Welcome and Naming the Circle

Invite the gathered to share their names and what brought them to the group.

In keeping with the “I have a dream” theme of the Martin Luther King holiday, we raise up tonight a wise African-American woman who inspires us to live the dream. Sojourner Truth is her name.

Sojourner Truth was born a slave near Kingston, New York in approximately 1797. She labored for four masters and in 1826 took her freedom. She is honored in American history for her speeches against slavery and for women’s rights, and for her work on behalf of freedmen after the Civil War.

Sojourner was renowned in her time for her speaking and singing ability. As a person who could neither read nor write, she had people read to her, especially the Bible. She was a down-to-earth preacher and a Spirit-led activist. Sojourner stirred the waters of her day, and inspires us to do the same in ours.

Our altar is set with quotes by Sojourner, pictures of her, and a bowl of water for “stirring the water.” Let us come together to reflect on her wise words and powerful impact on the world. We begin with song.

Song: “Fill me up” sung by Tasha Cobbs

Reading: “A Name is Sometimes an Ancestor saying Hi, I’m with You” by Alice Walker, Living by the Word © 1988. (Excerpt included here).

“There are always people in history (or herstory) who help us, and whose ‘job’ it is, in fact, to do this…Sojourner Truth is one such figure for me…The spirit of our helpers incarnates in us, making us more ourselves by extending us far beyond.”

Song: “Come And Go With Me To That Land,” Adaptation of traditional song

The Words of Sojourner Truth

Let the words of Sojourner Truth flow through us. After each quote, we will sing the words written with the tune of “Come And Go With Me To That Land” as the person who read the quote stirs the water.

1851 Women’s Rights Convention“…I want women to have their rights, and while the water is stirring I’ll step into the pool.” (Stir the water)

Song: We’ll all be free in that land…

“There is a great stir about colored men getting their rights, but not a word about the colored women; and if colored men get their rights, and not colored women theirs, you see the colored men will be masters over the women, and it will be just as bad as it was before. So I am for keeping the thing going while things are stirring; because if we wait till it is still, it will take a great while to get going again.” (Stir the water)

Song: No more slavery in that land…

“I’m not going to die, I’m going home like a shooting star.” (Stir the water)

Song: There’ll be peace in that land…

1851 at the Women’s Rights Convention in Akron, Ohio:

“Well, children, where there is so much racket there must be something out of kilter. I think that ‘twixt the negroes of the South and the women at the North, all talking about rights, the white men will be in a fix pretty soon. But what’s all this here talking about?

“Then they talk about this thing in the head; what’s this they call it? [member of audience whispers, “intellect”] That’s it, honey. What’s that got to do with women’s rights or negroes’ rights? If my cup won’t hold but a pint, and yours holds a quart, wouldn’t you be mean not to let me have my little half measure full?

“If the first woman God ever made was strong enough to turn the world upside down all alone, these women together ought to be able to turn it back, and get it right side up again! And now they is asking to do it, the men better let them.” (Stir the water)

Song: They’ll be singing in that land…

What has been stirred up in you today? What has Sojourner Truth said to you about women’s rights, anti-racism, and non-violence?  What dreams have been kindled or re-kindled?

Prayers of the People

Bless my body that I may sense when the water is stirring, and step into the pool.

(You may decide to bless individual body parts when appropriate.  For example: Bless my eyes that I may see when the water is stirring, and step into the pool).

Sending Forth Song: “Sojourner’s Battle Hymn” by Sweet Honey in the Rock,  Still on the Journey © 1993.