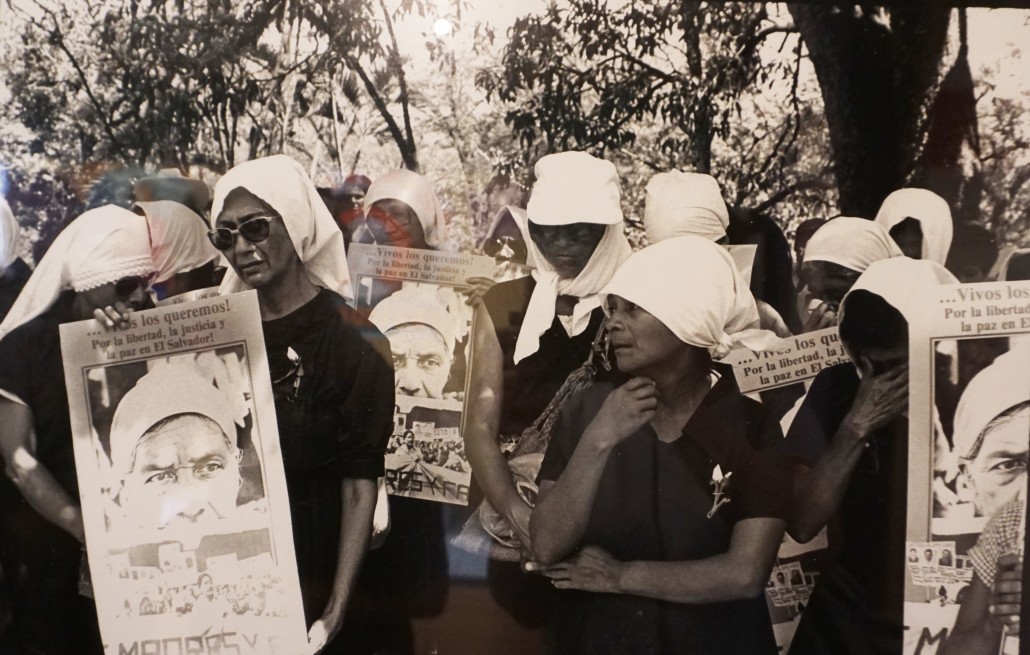 The Comadres of El Salvador are the Mothers who fight for human rights by demanding the reappearance of their disappeared and murdered family members and loved ones. Diann is a former board member of Comadres. Mallory has just returned from a visit to El Salvador where she met with the Comadres. They incorporate their experiences into this month’s ritual.

Set the altar with a white cloth, a lit candle, a bowl of water, and a small bowl with a tablespoon of salt. If you are able, add images of the Comadres and other artisan crafts from El Salvador.

Welcome and Naming the Circle

Share your name and how you celebrated International Women’s Day or a special woman in your life.

You may wish to tailor this call to your individual or your group’s experiences.

This International Women’s Day we are focusing on the Comadres of El Salvador because last January I (Mallory) went to El Salvador for the first time and met Comadres. One person who stood out for her during the experience was Blanca García. Blanca’s mother, Alicia, was one of the founders of the Comadres, a group of women who put their lives at risk before and during the civil war to find loved ones who were disappeared. Blanca’s sister, Pati, was a teen and young adult during the civil war (1980-1992), and a leader of the Comadres. Diann was a board member of Comadres in the 1980s.

As we celebrate International Women’s Day, let us lift up the generations of Comadres and other brave women of El Salvador who give us hope as they live out their faith in unimaginable circumstances. This ritual is dedicated to them.

We remember the disappeared throughout Latin America − in Argentina, Chile, El Salvador, Guatemala, Colombia, and Mexico − whose governments used terror against their own people as a means of control.

We remember the disappeared of the Salvadoran civil war, those who were tortured, raped, imprisoned, murdered, beheaded, and those who have still not been found.

We remember the four churchwomen – Dorothy Kazel, Jean Donovan, Ita Ford, and Maura Clarke – who were raped and killed because of their work for justice and solidarity with the people of El Salvador.

We remember those who were massacred at El Mazote − the 809 children, women, and men who were brutally killed on December 11, 1981, and buried in shallow mass graves.

We remember those who are being disappeared today in El Salvador −  young women and men who are disappeared, raped, executed, and whose bodies are left on the streets because of the increasing violence by gangs and the resurgence of the death squads.

We lift up the Comadres, the women who risk their own lives to find their loved ones and the loved ones of others. They persist, even through threats and imprisonment.

We lift up Alicia García, one of the founders of Comadres, who fought to find her brother and uncle. She nursed the people of her village when they were attacked by government military, and lost a child in her womb because of an attack in her home.

We lift up María Teresa Tula, another Comadre founder. Through her struggle to find those who were disappeared, she was awakened to her own oppression as a poor woman.

We lift up Pati García, who at 12 challenged Oscar Romero to stand with the poor. At age 24 she was interrogated, tortured, and raped for 22 days. She continued to lead the Comadres until she died in 2014 from cancer caused by the HPV she contracted from her rape.

We lift up Blanca García and the Comadres today who continue to fight for an end to impunity. They continue to search for the disappeared. They fight for human rights, lead literacy and basic life skills programs for the widows and orphans of the civil war, and give workshops of remembrance so that the people of El Salvador will never forget their history.

Stand, we stand with you, for liberty in this wide world.
Paz, queremos paz, y libertad en este mundo.

We celebrate Prudencia Ayala, a social activist who led the fight for suffrage and in 1930, despite the public attacks on her gender and indigenous heritage, was the first woman to run for president in El Salvador.

We celebrate Rufina Amaya, the only survivor of the El Mazote massacre who dedicated her life to telling the world about it. She once said, “God saved me because he needed someone to tell the story of what happened.”

We celebrate Óscar Romero who encouraged the Comadres to organize and find their loved ones. He publically read the names of the disappeared of El Salvador over the radio each week. Romero was killed while saying Mass for his parishioners on their 50th wedding anniversary.

We celebrate Ana Eugenia Marín, a Salvadoran woman who today, along with many others, works for care of the environment and an end to international, predatory, and harmful mining in El Salvador.

You, we honor you, your courage here, in this wide world.
Paz, queremos paz, y libertad en este mundo.

Ramah was the place of a concentration camp to which the survivors of the destruction of Jerusalem were taken. Poetically, Rachel, the mother of the tribes is imaged crying for her children who have been lost in Jeremiah 31:15.

Crying, grieving, and shedding tears are important. If we deny evil or suppress grief or anger, destructive forces can get stronger.

Story of Comadres, from Desaparecidos.org

Comadres [Comite de Madres Mons. Romero] was set up in 1977, when ‘disappearances’ were the order of the day in El Salvador. The group came into existence because relatives of those who were disappeared felt the need to share their grief with partners in misfortune and to unite forces with them.

Today Comadres is working on 4,000 cases of disappearances, an emotionally arduous job for the relatives. On the one hand, the women know that their disappeared husbands and children probably have been killed; on the other hand, as long as the body hasn’t been found there is always a spark of hope that makes them believe that one day the missing person may return home. This glimmer of hope gives strength to the organization: the fight goes on.

We hear the cries of the Comadres. We stand in solidarity with them. We honor their courage.

Why do you cry with the Comadres? How do you stand in solidarity with them? What hope do you get from their story?

Blessing with Salt and Water

Salt water reminds us of tears. Put salt into the water and mention names of those who cry for justice this International Women’s Day.

Put salt water as tears on each other’s faces, bonding and praying with all who suffer and all who work for justice.

Let us pray together.

Excerpt from a letter written by Ita Ford MM, martyr of El Salvador, to her niece and godchild, Jennifer Ford, on her sixteenth birthday, three months before Ita died.

I hope you come to find
that which gives life a deep meaning for you.
Something worth living for – maybe even dying for –
Something that energizes you, enthuses you,
enables you to keep moving ahead.

I can’t tell you what it might be –
That’s for you to find, to choose, to love.
I can just encourage you to start looking,
And support you in that search.

WATERtalk Notes: “Witnessing Against Violence: 25 Years After The Sexual...