“What White Feminists Need to Know about Intersectionality” 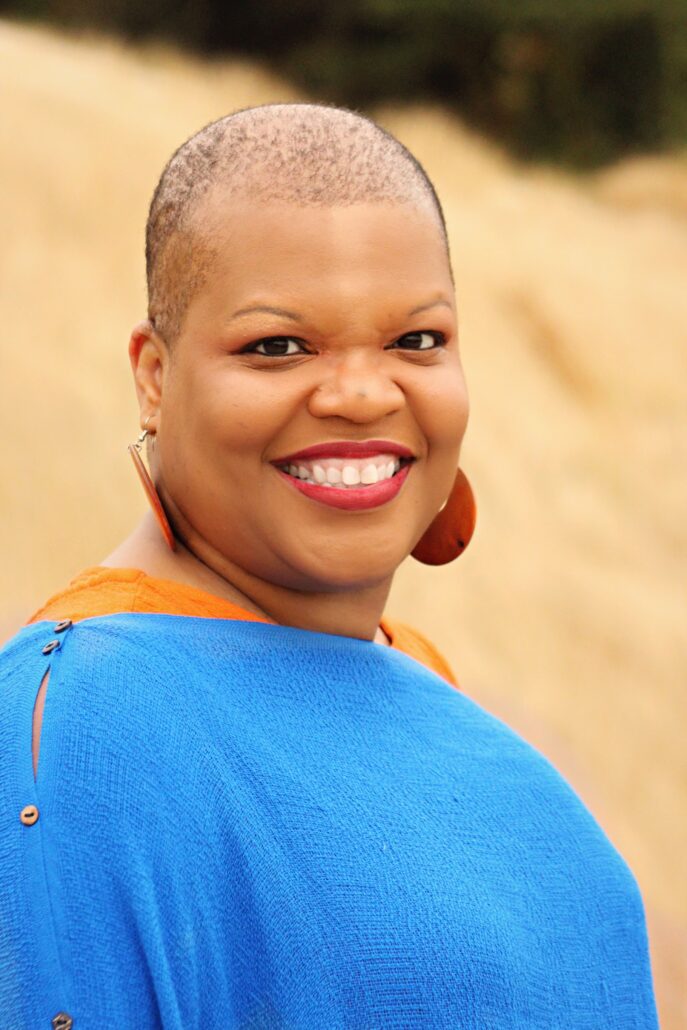 WATER programs are aimed at supporting and igniting social change. Whether in theology, ethics, or ritual, WATER’s efforts are geared to bring together solid academic/scholarly data with the activist commitments of our Alliance. We are delighted to welcome Dr. Chanequa Walker-Barnes to our table because she does just that—bringing a wealth of studies and experience both in religion and psychology to the work of social transformation, especially anti-racism and anti-sexism. With gratitude, I offer our speaker a warm welcome.

Chanequa Walker-Barnes, Ph.D., is a licensed clinical psychologist as well as a public theologian. She is an ecumenical minister whose work focuses on identifying and healing the individual and societal legacies of racial and gender oppression. Those will be part of our focus today as we look at “What White Feminists Need to Know about Intersectionality.”

She writes of herself, “Beyond the classroom, Dr. Chanequa Walker-Barnes spends most of her professional energy writing and ministering to clergy and faith-based activists. Her faith has been shaped by Methodist, Baptist, and evangelical social justice communities as well as by Buddhism and Islam. She was ordained by an independent fellowship that holds incarnational theology, community engagement, social justice, and prophetic witness as its core values. She currently serves as Associate Professor of Practical Theology at Mercer University School of Theology.”

I note the delight with which it was announced recently that she has become part of the faculty of Columbia Theo­logical Seminary where she will be professor of practical theology and pastoral counseling. She belongs to the American Psychological Association and the Association of Practical Theology, and she is on the editorial board of the Journal for Pastoral Theology.

You may have seen her names associated with a powerful piece, “Prayer of a Weary Black Woman,” which caused some right-wing pundits to accuse her of racism – what? She responded with a Tweet that should have stopped them cold: “The folks critiquing have clearly never read Psalms (other than 23 & 100). Cause then they’d recognize what it’s modeled after.” It did not stop the torrent of opposition. Some continue to bray and moan, but her work shines as you know if you have read the chapter we distributed, “Racism is not a Stand-Alone Issue” from her book I Bring the Voices of My People: A Womanist Vision for Racial Reconciliation (2019).

Dr. Walker-Barnes is also the author of Too Heavy a Yoke: Black Women and the Burden of Strength (2014).

Here is WATER’s blurb for I Bring the Voices of My People: A Womanist Vision for Racial Reconciliation (Eerdmans, 2019) as featured on What We’re Reading:

“This is an important read for people working to overcome racism and white supremacy. Dr. Walker-Barnes makes clear in chapters entitled ‘Racism is Not about Feelings or Friendship’ and ‘Racism in not a Stand-Alone Issue’ that racism is a matter of power which needs to be dismantled. This analysis is not intended to make white people feel the least bit comfortable. Rather, it is direct call to forget ‘cheap grace’ reconciliation and warm, fuzzy feelings and get on with the business of making substantive structural changes. Amen.”

So we invited you, Dr. Walker-Barnes, to bring your wisdom and your grace to this WATERtea. Thank you for accepting our invitation. We look forward to your words.

Slide images are by Dr. Walker-Barnes; notes are by WATER Staff 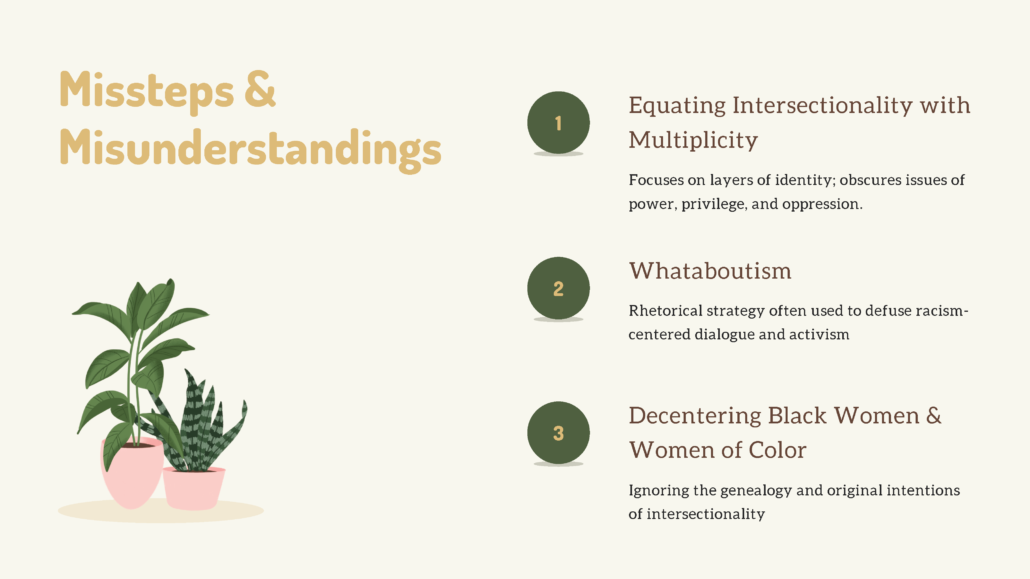 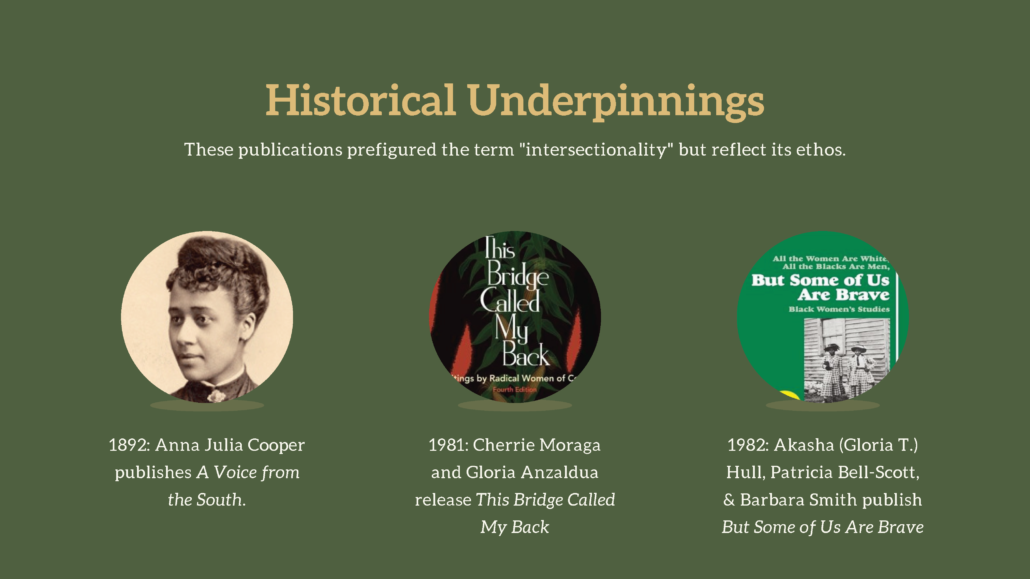 Intersectionality is a relatively new term (about 30 years old) but reflects the approaches Black women have been using in activism, organizing, and scholarship for at least a century. 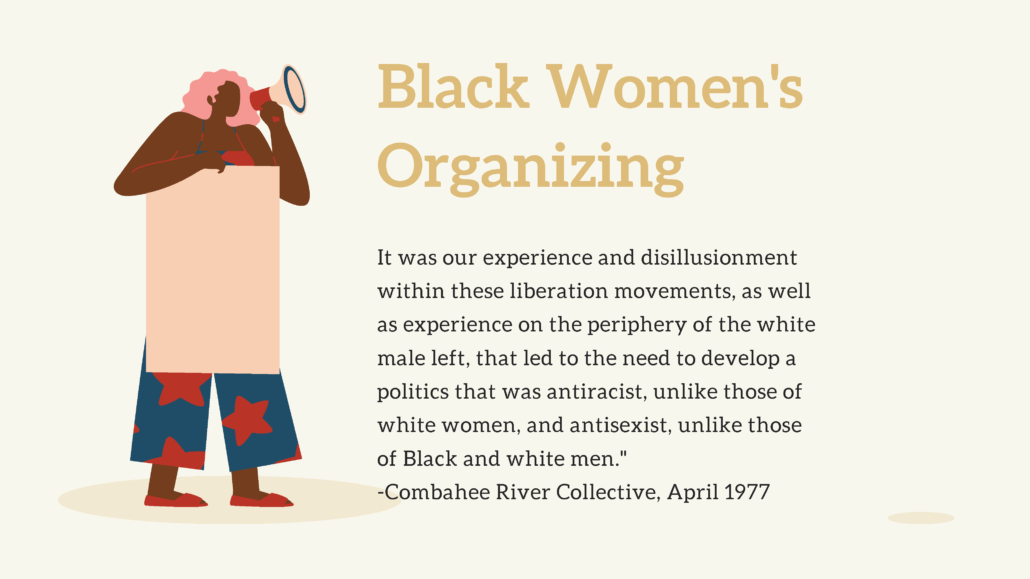 Signal text in both This Bridge Called My Back and Some of Us are Brave: Combahee River Collective in April 1977 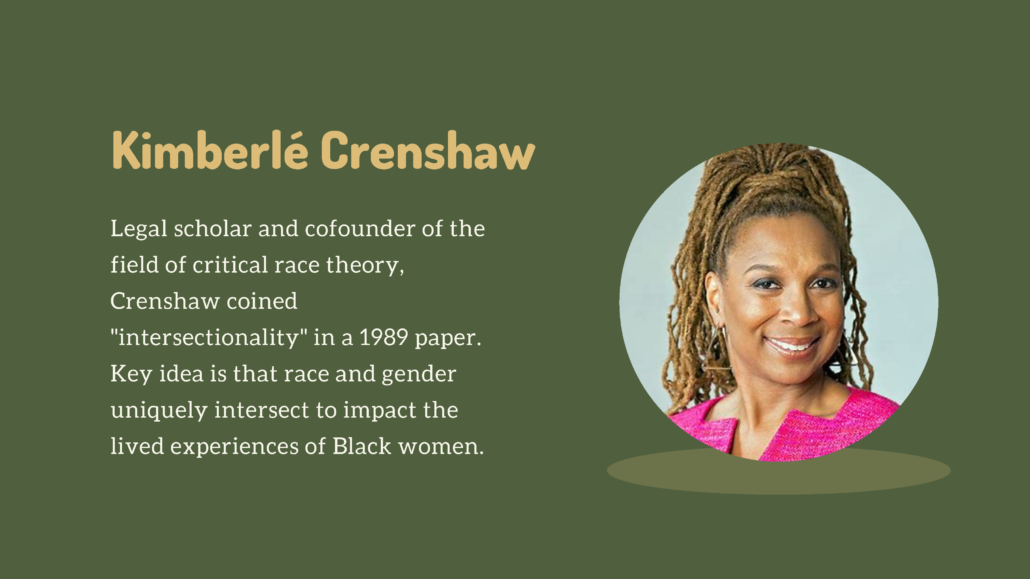 May 2021 WATERritual: Remembering our Many Mothers