“Maryam: A Woman of Bethlehem” 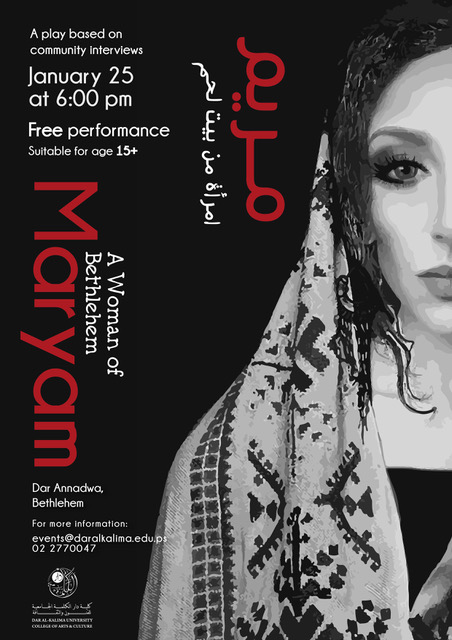 Listen to the recording here.

Mary E. Hunt: We welcome you to the 11th WATERtalk this season. Today’s program, like all WATER events, is geared to educate for social change. We are delighted to have Victoria Rue with us to do just that on the lives and challenges of Palestinian women.

If Victoria Rue had lived during the Renaissance, we would call her a Renaissance Woman. But because she lives in Postmodernity, I call her a Postmodern Woman in an effort to explain the wide sweep of her scope. She is at once a theologian with a Masters of Divinity from Union Theologian Seminary and she did a distinguished doctorate at the Graduate Theological Union where her dissertation was a feminist-themed play. But she is also a playwright and director whose skills in that area you are about to witness. She is the author of a range of works including the very useful text ACTING RELIGIOUS:THEATRE AS PEDAGOGY IN RELIGIOUS STUDIES (Pilgrim Press, 2005).

Victoria teaches at San Jose State University where she lectures in Comparative Religious Studies and Creative Arts. She was a Fulbright Scholar at Dar Al Kalima University College of Arts and Culture, Bethlehem, Palestine 2018-2019. Over the years, she has taught in a range of other places lucky enough to get her, including St. Lawrence University and California State University at Monterey Bay. Oh, and did I mention that she is a Roman Catholic Woman Priest engaged in creative liturgy and pastoral work. Any one of these many approaches to “be of service” as she explains it,  would be life-filling. But Victoria Rue embodies them all with style and skill. Victoria lives with her spouse Kathryn Poethig in Berkeley, CA.

In the Fall of 2021, Maryam: A Woman of Bethlehem will come to the USA for a West Coast Tour of the play.  Victoria has received initial grants from San Jose State University, and the Sam Mazza Foundation of San Francisco to make this happen.  She is in the process of applying for other grants that will support  bringing the two Palestinian actresses and dramaturge to the US for the tour.  The play is currently being adapted for US audiences.  She would be most interested in any further funding ideas that you may have. I assured her that this group has contacts around the world so we’ll keep this wonderful project in mind.

I was a Fulbright scholar in Bethlehem, in the West Bank in Palestine for 6 months in the fall of 2018. This play premiered in January 2019 in Bethlehem.

Bethlehem is an extraordinary place for many reasons. It is the home of the beautiful and iconic Church of the Nativity that Helena, mother of Constantine, insisted on building. There’s also the Milk Grotto, where Christian and Muslim women pray to Mary for fertility. And across from the Church of the Nativity is the Mosque of Omar, with its two palm trees which honors the Qur’an’s story of Maryam giving birth to Issa, who we know as Jesus. In the Qur’an she gives birth alone, in the desert under a palm tree. There are three Christmases, and each has its own procession.

If we just left it there, it would be nostalgic and too romantic a view of Bethlehem. On every hill that surrounds Bethlehem, there is a Jewish-Israeli settlement, as Bethlehem is a part of occupied territory of Israel. The settlements have their own highways that Palestinians are not allowed to drive on. These settlements have water 24/7, Palestinians do not. There are 500,000 Jewish Israeli settlers in the West Bank. When you drive into a settlement, you enter a gated community. It’s full of white and brown, 2 story houses, with red tile roofs. They look like the houses in Fremont, California. You recognize the west, and you recognize that the occupied territories of Palestine look like under developed nations.

In this environment, this little town of Bethlehem, I lived and worked for 6 months, teaching performance studies at Dar Al Kalima University College of Arts and Culture and writing a play. Dar Al Kalima believes that filmmaking, dance, music, theatre, and painting are the most powerful ways to resist the Israeli occupation that is continually trying to erase the heritage of the Palestinian people. The arts, according to Dar Al Kalima, offer hope and identity.

In the past five years, I have developed several interfaith plays as a theologian: a Jewish-Muslim view of the Exodus scriptures, and a Christian-Muslim view of the scriptures concerning Mary/Maryam. Teaching the Abrahamic traditions led me to seeing how important Mary is to both Christians and Muslims.

In my Fulbright project, I wanted to focus on: who is this Mary figure in Bethlehem today?

The challenge of this project was to interview thirty people, Christians and Muslims, who lived and worked in Bethlehem. Of the thirty interviews, there were slightly more women than men. The majority of the population is Muslim, and the Christian population is declining, due to the challenges of living in Palestine. Bethlehem has the highest poverty rate in the West Bank and the unemployment rate, before Covid, was 27%. The Ministry of Tourism states that this unemployment is in spite of the 2 million tourists who visited Bethlehem in 2016. If you go in on an Israeli tour, you spend 45 minutes in Bethlehem and you’re told to be fearful of Palestinians.

The population of Palestine, particularly of the West Bank, is 4.8 million people. They are currently in complete lockdown due to Covid-19. There are 53,000 families who are sliding into poverty. Domestic violence, affecting women and children is on the rise. In this place that is called Bethlehem, under lockdown and occupied, I wondered who is Mary/Maryam. Perhaps she is abused, as one of the women affected by domestic violence due to the lockdown. We know that Mary is many things, and we cannot say that she is only abused in Bethlehem. She is resilient, persistent, and alive in daily life.

The play that I shaped is a synthesis of these many interviews. It is an oral history and an ethnography of the people, particularly the women, of Bethlehem. Overall, the play offers a way to talk about the roles of women in Palestinian culture, and by extension in the Middle East.

There are all sorts of wonderful people I interviewed – a Palestinian yoga teacher, an Imam, a retired gender studies professors, a Christian theologian, an icon painter, mothers, fathers, young people – both Christian and Muslim.

Today, I’m showing you the last ten minutes. Each person interviewed is preceded by a slide that states their name (they are all renamed)  and their age and the scene title. There are two actresses that play 22 characters—both are Muslim, one wears a hijab, one does not. And there are slides of Palestinian artists’ work on Mary/Maryam.

Q: I’m so excited about this play – it reaches the human heart and soul and what’s happening in the world on so many levels.

Q: We have witnessed some of these dynamics in occupied parts of Northern Ireland. I was struck that there wasn’t much Jewish about the play. When I think of Mary, I think of her as a Jewish woman.

A: When I asked: how does it complicate the issue that Mary was Jewish, everyone said that wasn’t an issue, they responded Mary was Palestinian.

Maryam, at root, is much larger than Maryam. She is perhaps connected to the Canaanite Asherah.  She was worshipped in trees on hilltops by the Canaanites. Israelite monotheism cut down the trees.  Maryam is deeply embedded in Palestinian culture. When people stub their toe, or touch something hot, or are surprised by something they’ll say “Ya Adrah” which means “the virgin.”

Q: What reactions have you received from Islamic feminist scholars?

A: With Islamic scholars, and Muslims in general, there is a great respect for Maryam as a woman of faith. She is thought of by many as a role model. The fact that she gave birth alone in the desert is a sign of resilience. Muslim women who give birth today are given dates, as Maryam is reported in the Qur’an to have eaten dates for energy when giving birth.

Q: What is the Protestant response in Palestine to revere Mary?

A: Protestantism is changing a lot regarding Mary. Dar Al Kalima is headed by a Lutheran theologian, and he told me that the roots of Mary are deeper in Palestine. She is becoming a more important figure in Protestantism.

Q: How will we have access to this play?

A: It is currently published in the journal Ecumenica. In terms of the tour, I would love to bring it around the country, but that would need funding.

Q: What about reactions from Muslim men?

A: I think of a man sitting in the front row with his two sons when this premiered in Bethlehem. He said, “I am so happy with this play because it raises up our Palestinian women and we need to raise them up more.” As it toured, it was performed in a Catholic church and a third of the audience got up and left. It bothered people that there were so many views of Mary. One Muslim man stated he didn’t know there were atheists in his community.

Q: How do children learn about Mary in the home? How do parents pass this on? Where do they get the culture?

A: In Bethlehem, the culture is all around you. A few weeks ago, during Covid-19, there was a procession that took Mary through the streets as a protective blessing. At home, there are food traditions about Mary. I was speaking with an agnostic man who has a stone basin with Mary on it in the middle of his living room. When he remodeled his house he decided to leave it there because he grew up with it in that place.

Q: How about ceremonies or rituals?

A: All the feasts that exist in the Catholic church take place there, and many are done in a slightly different way in the Orthodox Churches, which have deep and wide traditions with Mary.

At the Mosque of Omar,  in Manger Square in Bethlehem, there are 2 palm trees out front that were planted because Maryam gave birth beneath a palm tree in the desert. The Chapter of Maryam giving birth in the Qur’an, is read to women as they are giving birth themselves.

Mary E. Hunt:  Thank you once again to Victoria Rue.

Please contact Victoria Rue at victoria.rue@sjsu.edu to inquire about the script.

An Open Letter to Catholic Voters and All Voters for Justice in the United States...
Scroll to top