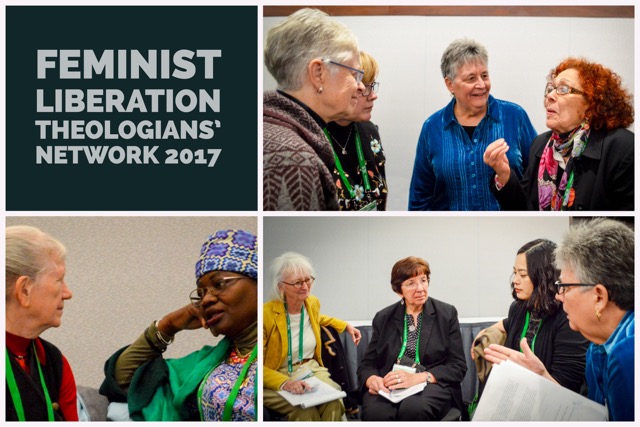 In the midst of one of the most tumultuous political years in recent memory, the Women’s Alliance for Theology, Ethics, and Ritual (WATER) convened the twenty-first meeting of the Feminist Liberation Theologians’ Network at the Annual Meeting of the American Academy of Religion/Society of Biblical Literature in Boston, Massachusetts on Friday, November 17, 2017 from 4-6 PM. Mary E. Hunt and Elisabeth Schüssler Fiorenza presided. More than seventy participants from more than ten countries gathered to explore the theme of Resistance, Resilience, and Creativity.

The meeting opened with the customary introduction by each person, this time describing a way in which the person resisted. We were delighted to have students, local activists, professors, minsters, and others in the diverse group. It is heartening to know that people look forward to this session as a place to discuss substantive issues and to network with colleagues who are engaged in similar struggles.

You can watch and share the video of the meeting here.

Three speakers led off the conversation on resistance, resilience, and creativity:

Title: “Feminist Spiritual Activism in the Militarized World.”
Bio: Christine Pae is Associate Professor of Religion/Ethics and Chair of the Religion Department at Denison University, as well as an Episcopal priest.

Christine Pae spoke about spiritual activism both during the Korean War and now. She discussed women as sexualized labor in the service of American soldiers. She spelled out “survivor wisdom” including the connection between love and exploitation. Christine concluded with an image of “God filled with tears” as part of the politics of life in a militarized world.

Title: “What Sustains us for the Long Journey of Resistance, Resilience and Creativity?” Bio: Elaine Wainwright is Professor Emerita of the University of Auckland where she spent 13 years as Head of the School of Theology. She is a Sister of Mercy.

Elaine Wainwright spoke of the women in the Gospel of Matthew drawing on her work in the new Wisdom Commentary series (Collegeville, MN: Liturgical Press). She lifted up the Rohingya women immigrants as examples of contemporary women on a long journey of resistance and survival. She turned her major attention to matters of diversity, especially bio-diversity as a foundation for creative, sustaining life. Elaine is increasingly focusing her own work on Earth studies, ecology in biblical studies: “Hear the cry of the Earth.”

Title: “The Soul of Democracy”
Bio: Sharon D. Welch is the author of, After the Protests Are Heard: An Ethic of Power, Professionalism and Risk (NYU Press: forthcoming), and has written five books in the field of social ethics. She is currently an affiliated faculty member at Meadville Lombard Theological School, a Unitarian Universality faculty.

Sharon Welch argued that the soul of democracy is in peril given the current administration. She laid out authoritarian values, settings where people are offered false choices in terms of values or choices based on individual and not communal wellbeing. The tendency to conform and not create is reinforced. Sharon proposed the term “generative interdependence” to describe a fruitful way forward.

WATER and participants expressed gratitude for these provocative and useful presentations.

Small groups met to discuss the presentations and other experiences of resistance, resilience, and creativity. Among the issues raised were the need for space and money to be creative. Collaboration between groups, for example the Faith Trust Institute and the Parliament of the World’s Religions, is a key way forward. One lovely image offered was that of earth functioning as the ground for a dancer—inviting the idea of opposition as traction for change. A sign of hope was the YES vote on marriage equality in Australia (editor’s note: that eventually became an overwhelming parliamentary victory).

Suggestions for the 2018 meeting were nearly unanimous on the theme of economics. People expressed interest in fundraising and the sustainability of movements as well as ways to talk about income inequality in diverse groups. Changes in the global economic order ground these local matters, all of which will form the focus on our 2018 meeting on Friday, November 16, 4-6 PM in Denver, Colorado at a location to be announced. Watch for more information on Economics—Global and Local: A Feminist Liberation Theology Priority.

Each presenter referenced the FLTN presentations of the day before. This format allows for rich input from a variety of sources and ongoing discussion of the common theme. We look forward to continuing this process in 2018, with thanks to the Women’s Caucus leaders.

Please feel free to post to the FLTN Google Group: feministliberationtheologiansnetwork@googlegroups.com. Share ideas, information, and actions relevant to our common focus, which is to bring feminist liberation theological insights to the work of social change.

Please feel free to contact me (mhunt@hers.com) or WATER (water@hers.com) to share suggestions of speakers and/or foci for our 2018 meeting. Once again, a warm word of thanks to our presenters and to all who made this meeting such a meaningful experience.