Raising Up Diverse Women in Democracy 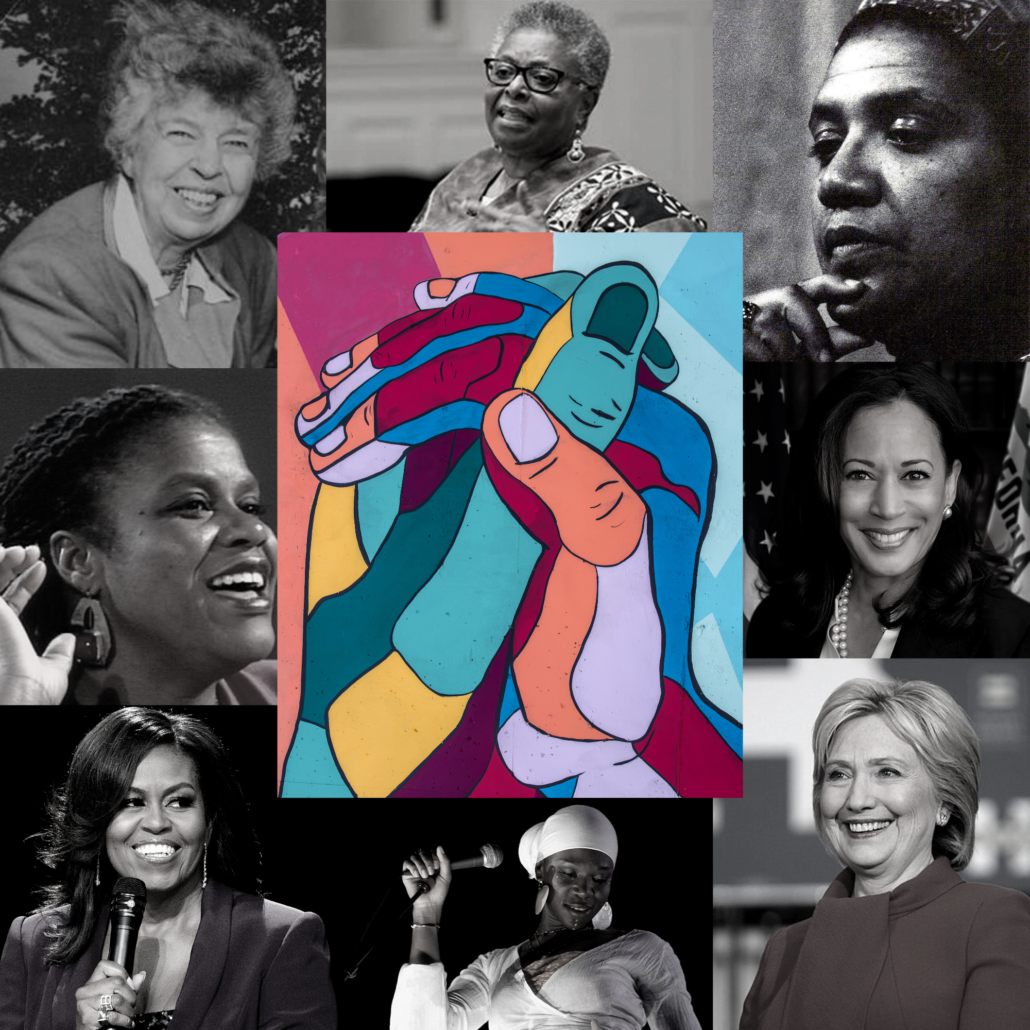 The recording is available on SoundCloud here.

Preparation: Have a glass of your favorite drink nearby for toasting.

Good evening. I am Diann Neu. I am here with Anali Martin to welcome you to this WATERritual, “Raising Up Diverse Women in Democracy.”

As the first woman to hold the Chilean presidency, Verónica Michelle Bachelet Jeria, reminds us, “For me, a better democracy is a democracy where women not only have the right to vote and to elect but to be elected.” Tonight, during Black History Month, we raise up the women past, present, and future who hold a role in being participants, supporters, representatives, and activists of democracy.

We celebrate and support womanists who are on the forefront of the struggles for liberation.

We join our sisters of African descent in the United States to resist racial, gender, and class discrimination and all forms of social oppression. We come to learn and be nourished by womanist wisdom in order to be inspired to work against racism and white supremacy so that the world will become a place of justice, equality, and peace for all.

Women in politics are the stars of the season, with Kamala Harris breaking the political glass ceiling for all of us. So tonight, we raise up the diversity of women in politics and give thanks for their courage and witness. And we give thanks for women artists who honor these diverse women by bringing their works to life through different media and platforms.

We who believe in freedom cannot rest,

We who believe in freedom cannot rest until it comes.

This Black History Month, we listen to the wisdom of womanists to inspire us.

Alice Walker, novelist, poet, activist, defines womanist as: “Loves music. Loves dance. Loves the moon. Loves the Spirit. Loves love and food and roundness. Loves struggle. Loves the Folk. Loves herself. Regardless. Womanist is to feminist as purple is to lavender.”

Thank you for your Womanist Wisdom, Alice Walker!

Katie Geneva Cannon, Womanist theologian, founder of the Center for Womanist Leadership, first woman of African descent ordained by the United Presbyterian Church in the United States reminded us before she died:

“Being a frontrunner in a lot of this work, people wanna dismiss the truth that I speak as anecdotal. Okay, if I don’t have a scientific database, where I can prove that what I’ve experienced is true for so many people then it’s not true. So, the epistemological sea of forgetfulness is when people take truth that hurts, truth that goes to the core of the being, truth that goes to the marrow of the bone and people wanna say, if you can’t prove it scientifically, factually then it doesn’t exist. So, what I try to encourage people to do is, that kind of truth that stings like a serpent’s tooth, that kind of truth that makes your teeth itch. The kind of truth that causes some people to lose their minds, up in here, up in here. So even when people call your truth a lie tell it anyway, tell it anyway.”

From Journey to Liberation: The Legacy of Womanist Theology (0:00-0:59)

Thank you for your Womanist Wisdom, Katie Geneva Cannon!

“Black women in America are morally bound…to be justice seeking whole human beings. Even in the face of being told sometimes relentlessly so that we are less than whole, we are less than human, don’t believe that lie. Don’t live our lives in a lie. We cannot live our lives in the folds of old wounds. It’s not healthy; it’s not life-giving; it doesn’t bring in justice; it doesn’t bring in the next generation. So that’s what the moral imperative is for black women: to live life beyond those old wounds, those old, old folds. Know they’re there but we don’t have to live in them and through them. Take seriously that this is the land of the free. Create spaces and more spaces and more spaces of freedom, so that people can become who they are, what they’re about, what they can be, and that there are no limits. And in the midst of that, do so with a strong sense of justice, bringing others along with us.”

Thank you for your Womanist Wisdom, Emilie Townes!

Raising up Diverse Women in Politics

As a result of the historic election in the U.S., we raise up diverse women in politics who are beacons of democracy!

Nancy Pelosi, you are the first and only woman speaker of the house in 2007 and again in 2019, and the second-highest ranking elected woman in U.S. history, second in the presidential line of succession.

Michelle Obama, you are a graceful and gracious model as the first African American First Lady of the United States, who passionately advocates for girls’ education, for healthy families, and for respect for all women.

Eleanor Roosevelt, you were a pioneer who changed the role of the First Lady through your active participation in American politics. You were a diplomat, journalist, activist, and advocate for a wide range of human rights issues who later served as a United Nations spokesperson. Because of your leadership, more women were empowered to enter political life.

You made a difference for democracy.

Hillary Rodham Clinton, you transformed the role of First Lady to one of First Partner. You paved the way as the first female senator from New York, the third female Secretary of State, and as the first major party nominee for President of the United States.

Women in State and Local Governments, you attend to the needs and expectations of neighborhoods and communities at the grassroots.

You made a difference for democracy.

Women in Training for Future Political Office, you are a hope for humankind.

Women who will one day be President of the United States, we await your leadership and pray that it will come in our lifetime.

You make a difference in democracy.

Girls born today who will be Political Leaders tomorrow, to you is given the challenge of a world bursting with possibilities. Remember the stories of your foremothers as you make your mark on the global community. Your time is soon.

Video: “The Women are Coming”

Raising Up Diverse Artists and Activists in Democracy

Artists, poets, musicians carry the soul of a culture. Here is artwork that inspires. 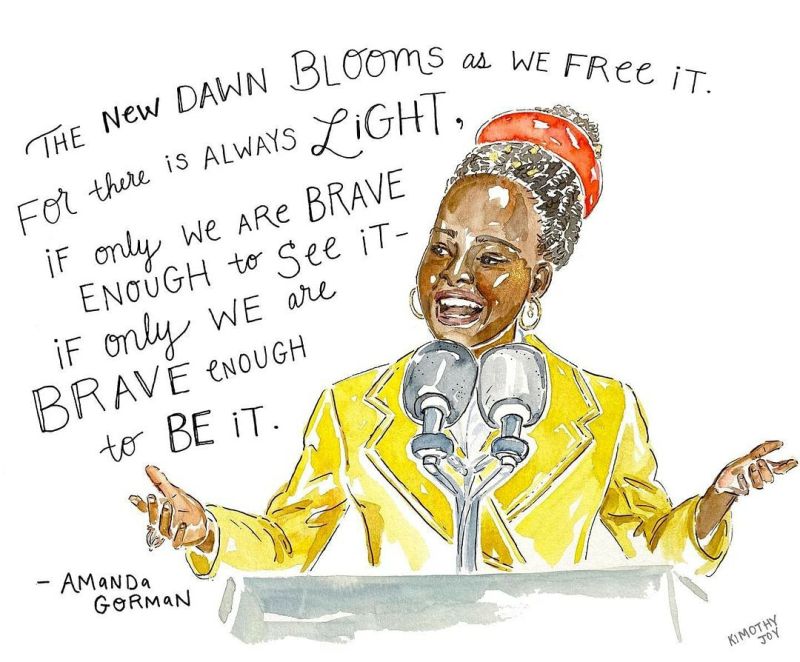 Quote: From “The Hill We Climb” by Amanda Gorman for 2021 U.S. Presidential Inauguration

Shanthi Chandrasekar, Roopal Shah, and Sowmya Somnath of Maryland co-created an Inauguration Kolam 2021, a South Indian ritual modeled after geometric Indian art traditionally created by women as an energetic welcome, especially for Vice President Kamala Harris. They will assemble the final art installation of 2,000 tiles formed on recycled cardboard by people across the country in DC. —

Think about what you heard and saw from womanists, pioneering women in politics in the U.S. and worldwide, and women artists. Like these women, we participate in democracy by voting, campaigning, writing and calling our political leaders, attending public hearings, running for public office ourselves, acting on our convictions, creating poems and art, and more.

What are your reflections after hearing these womanists, women in politics, women artists, and women in democracy?

We will have a short time silent reflection, during which you can type your reflection into the chat.

Toasting the Diversity of Women in Democracy

Let us raise our glasses together to toast the diversity of women in democracy.

Blessed are you, God of Goodness, Spirit of Resistance, Holy Trust,

for giving us this drink to celebrate womanists, women in politics, women artists, and women in democracy.

We toast them with gratitude for breaking glass ceilings,

with gratitude for being brave, courageous, and strong,

with gratitude for living a spirituality of resistance,

with gratitude for breaking silence and speaking truth to power,

with gratitude for the precious gifts women bring to the struggle for democracy.

Let’s drink with gratitude for diverse women in democracy yesterday, today, and tomorrow.

Let us go forth to struggle, resist, and rise up, unafraid, to move mountains together

Let us go forth to resist racial, gender, class discrimination, white supremacy, and all forms of social oppression.

Let us go forth with gratitude for our democracy.

You’re broken down and tired

Of living life on a merry go round

And you can’t find the fighter

We gonna walk it out

And I’ll rise up

And I’ll do it a thousand times again

When the silence isn’t quiet

And it feels like it’s getting hard to breathe

But I promise we’ll take the world to its feet

Bring it to its feet

And I’ll rise up

And I’ll do it a thousand times again

All we need, all we need is hope

And for that we have each other

And for that we have each other

And we will rise

In spite of the ache

I will rise a thousand times again

And we’ll rise up

In spite of the ache

And we’ll do it a thousand times again