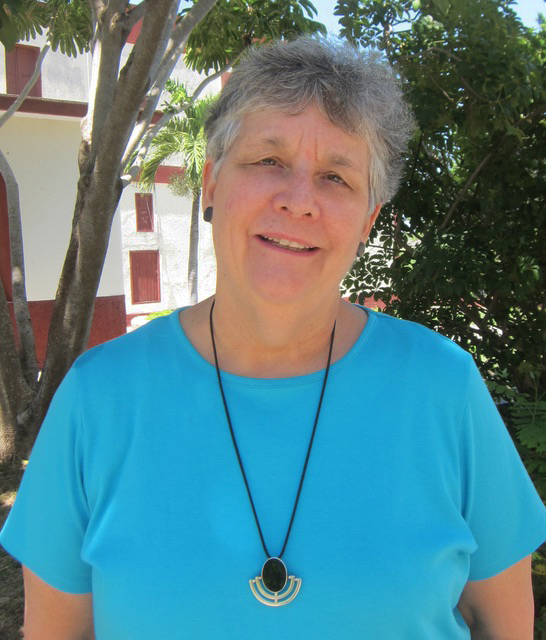 Mary E. Hunt, Ph.D., is a feminist theologian who is cofounder and codirector of the Women’s Alliance for Theology, Ethics, and Ritual (WATER) in Silver Spring, Maryland, USA. A Catholic active in the women-church movement, she lectures and writes on theology and ethics with particular attention to social justice concerns.

She completed her Clinical Pastoral Education spending several years teaching and working on women’s issues and human rights in Argentina as a participant in the Frontier Internship in Mission Program. She continues that work through WATER’s project, Women Crossing Worlds, an ongoing exchange with Latin American women.

Dr. Hunt was Adjunct Assistant Professor of Women’s Studies at Georgetown University for five years. For the 2000-2001 academic year, she was at Harvard Divinity School as a Research Fellow at the Center for the Study of Values in Public Life. She has taught in summer programs and online at Iliff School of Theology and Pacific School of Religion, as well as summer classes at Lancaster Theological Seminary.

She is a coeditor with Diann Neu of New Feminist Christianity: Many Voices, Many Views (SkyLight Paths Publishing, 2010). She is also the editor of A Guide for Women in Religion: Making Your Way from A to Z (Palgrave, 2004) and a coeditor with Kecia Ali and Monique Moultrie of a revised edition (2014).

Mary Hunt is a coeditor, with Patricia Beattie Jung and Radhika Balakrishnan, of Good Sex: Feminist Perspectives from the World’s Religions (Rutgers University Press, 2001). She is the author of Fierce Tenderness: A Feminist Theology of Friendship (Crossroad Publishing Company, 1991), which was awarded the Crossroad Women’s Studies Prize. She edited From Woman-Pain to Woman-Vision: Writings in Feminist Theology (Fortress Press, 1989) by Anne McGrew Bennett. She edited La sfida del femminismo alla teologia, The Challenge of Feminism to Theology, with Rosino Gibellini (Editrice Queriniana, 1980).

Among her many publications are articles in the Journal of Feminist Studies in Religion, Concilium, Conscience, Religion Dispatches, and Mandragora.

Mary is a member of the American Academy of Religion where she co-chaired the Women and Religion Section and the LGBTIQ Status Committee; she also belongs to the Society of Christian Ethics and the Catholic Theological Society of America. She is an advisor to the Women’s Ordination Conference. She is active in the Women-Church Convergence.

She lives in Silver Spring, Maryland, with her partner, Diann L. Neu, and their daughter, Catherine Fei Min Hunt-Neu.

Mary E. Hunt may be reached at mhunt@hers.com.